Meet DSMP, an Alternative, Indie Version of a Luxury Group

Luxury groups assemble to take advantage of synergies and scale — and typically the main, cash-cow brands can help fund smaller ones in development.

“I don’t want to become LVMH, but I want to be a new fashion group where there’s synergies and accidents,” Adrian Joffe, chief executive officer of Dover Street Market and president of Comme des Garçons International, said this week.

While not on the official calendar for the first online edition of Paris Fashion Week, the four brands under the DSMP umbrella — Paccbet, Youths in Balaclava, Liberal Youth Ministry and ERL Eli Russell Linnetz — all produced spring 2021 collections, along with videos and lookbooks. The physical showroom is receiving European buyers until July 24, while North American and Asian retailers can place orders using a virtual showroom.

Honey F–-king Dijon, a collection by the Berlin-based DJ, also falls under DSMP. DSMP is wholly owned by Comme des Garçons, but it doesn’t own the brands under its umbrella. Rather it helps nurture original products, and takes care of brand development, production and distribution.

ERL, only presenting its second full collection, is already sold in 45 doors, and founder Linnetz is plotting his first fragrance later this year. In sync with a collection rooted in Venice Beach, Calif., it will be called Sunscreen. An art director and photographer known for his collaborations with Lady Gaga and Grimes, Linnetz shot the lookbook in a style reminiscent of the slyly homoerotic Seventies magazine After Dark.

Joffe, who scours the world for fresh fashion talent, noted that huge distances between the four designers haven’t stopped them from helping each other.

Antonio Zaragoza, the designer of Guadalajara, Mexico-based Liberal Youth Ministry, introduced his jewelry manufacturer to Singapore-based Youths in Balaclava, and one of his fabric suppliers to Russia’s Paccbet.

“That’s exactly the kind of synergy I was hoping for,” said Joffe, who let slip that he plans to put two more brands under the DSMP umbrella later this year.

To be sure, his young designers are plugged into the zeitgeist. Zaragoza’s spring collection, “Ethnic Adolescent,” drew inspiration from youth culture from the time of the Aztecs through the Sixties, while Youths in Balaclava celebrated the transgressive style and avant-garde of musician Genesis P-Orridge, who died earlier this year.

Zaragoza said he has been “nourished” by sharing ideas and challenges with his peers.

“Being all together with so many different backgrounds and different countries and all together clashing, it’s just wonderful. I have learned a lot — from the business to the creative way on making collections.”

He also lauded the backup of DSMP and Comme des Garçons. “It’s really inspiring the way they push everything with freedom and a kind of rebellious vibe,” he said. 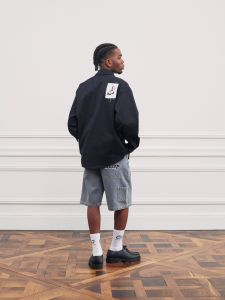