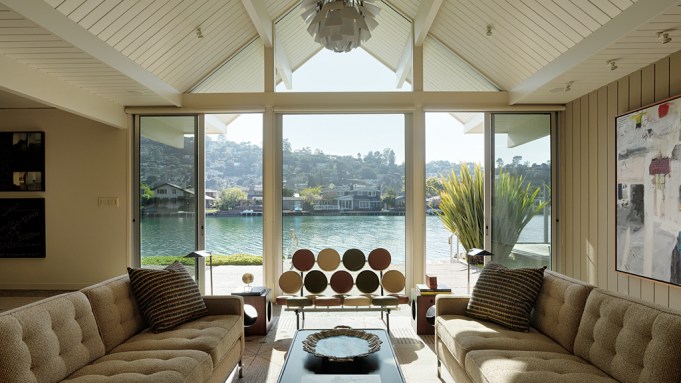 “Each generation produces visionary collectors who seek to capture the zeitgeist of their art and their age in their personal environments, and who have called upon like-minded designers to help them achieve that goal,” writes Alisa Carroll in the introduction to a new book, “Art House: The Collaboration of Chara Schreyer & Gary Hutton,” (Assouline), written by Carroll and photographed by Matthew Millman.

She then goes on to write that Schreyer and Hutton, an art collector and an interior designer, respectively, who have worked together on six houses, “have provided a singular, insightful perspective on our time.”

Schreyer has been collecting art since the late Seventies, when she began to do so with her former husband. At first, they concentrated on American modernists. But as her collection has grown, it has come to include works by Man Ray, Louise Bourgeois, Cindy Sherman, Glenn Ligon, Donald Judd, Jeff Koons, Richard Serra, Gilbert & George, Frank Stella and Kara Walker, among others.

Hutton has designed the interiors of her five residences in California, each of which includes a master bedroom, but which are intended mainly to showcase her collections. Among them is a house in Marin County, originally decorated by Anthony Machado and revamped twice by Hutton, which contains a remarkable 250 pieces of art; an apartment on the 24th floor of the Four Seasons building in San Francisco, which has a view of the ornate dome of the landmark Beaux Arts Humboldt building; the Marx House, built in the mid-Sixties in Belvedere Tiburon by architect A. Quincy Jones of Jones & Emmons and developer Joseph Eichler, one of only a dozen custom houses Eichler created; a house in L.A. that she bought specifically because it had a wall that would be ideal to anchor one of her sculptures, a 1969 Judd stack, and a second house adjacent to the main L.A. property, which is only 2,000 square feet.

The collector is quoted in the book as saying of the Belvedere Tiburon place, “Acquiring a rare custom Eichler, designed by Jones and Emmons, is like buying a Judd.”

Schreyer is on the board of trustees of SFMOMA and MOCA and the board of overseers of the Hammer Museum, and often gives tours of her houses and talks about her collection to groups of museum patrons, academics and leaders of nonprofits.

The collector first encountered Hutton’s work when she walked into a San Francisco restaurant called Today’s in 1978 and asked who had designed it. Hutton says that, on their first project together, a house in Sonoma, “She was really involved. She knew that I was up early in the morning, so for six years I got a phone call every morning at 7:30. One of the funny things was when I went on vacation, and I left [his colleague] Brad in charge. She had her morning questions, and she called Brad at home, and he was like, ‘Huhhh?’ And she said, ‘Oh, Brad, I’m really sorry; you’re not a morning person. Goodbye!’”

Hutton goes on to recall, “One of the things that I really loved about art school was the opportunity to experiment. At the time, what was art was expanding really rapidly. We were vacu-forming plastics; we all loved new materials. What is so much fun about working with Chara is that she’s always willing to listen to a harebrained scheme, like about putting a bunch of scrub brushes on the wall. It absorbs sound, and it gives a really interesting look. She’s really willing to be experimental. It’s the basis of how she collects art, pushing the boundaries of what is art. When I bring things to her, she’ll say, ‘What?’ or she’ll say, ‘I would never have thought of that, it’s a great idea, sweetie.’ She always calls me ‘sweetie.’”

Another of Hutton’s unusual ideas: blinds made of shag carpeting for the Marin house. He used cork for the floor of the den in the Belvedere Tiburon house and Marmoleum, a Sixties synthetic material, for its kitchen.

Hutton emphasizes that Schreyer often purchases new art, and she frequently moves the pieces she already has. Carroll quotes him as saying, “It was not the kind of place where you put the Goya over the sofa and decorate the room around it. We all understood that nothing was ever going to stay in the same place; the art was always going to shift.”

Schreyer notes that she acquired one of the centerpieces of her collection, Marcel Duchamp’s “Boite-en-valise, Series A,” which had belonged to Andy Warhol, when it was offered to her privately. It consists of 69 miniature reproductions of the artist’s work.

“Historically, galleries want their pieces in a collection that has quality and connoisseurship at its base,” she says. Then she adds, “Great art doesn’t ever make it to the open market. It’s brought to you because you have a known collection that has intellectual rigor.” She has worked with the art consultant Andrew Ruth for years, and credits him with helping her to assemble her collection. The collector says that her favorite pieces are Robert Gober’s 1984 “Deep Basin Sink” and Eva Hesse’s 1965 “Top Spot.”

Duchamp, Schreyer notes, “used everyday objects, and started with ready-mades, but Gober’s sink was completely handmade, made of plaster. He’s an artist who grew up in New York as an outsider because he is gay. Sinks suggest cleanliness, baptism and washing off. But this sink has no drain and no faucets.”

As for Eva Hesse, “she was Jewish and born in Germany and moved to America. She brought the focus onto women’s art. She was ground-breaking as a woman artist and died when she was only 34 years old.”

Gober’s 1989 “Hanging Man/Sleeping Man” toilet paper rolls are the centerpiece of a room in the San Francisco apartment, which is what Schreyer calls a “catastrophe room” — one that explores “crisis and disaster,” as Carroll writes. It also features a prison toilet and a soap dispenser that resembles an IV. The fact that there are 85 rolls of toilet paper speaks of the “lives of such deprivation” that Shreyer’s parents suffered, which often leads survivors to stockpile supplies.

Her father, Max Webb, is still alive at 99. He was born a Polish Jew, survived many concentration camps and a death march and came to the U.S. in 1952 and became a very successful developer in Southern California and a philanthropist. “He’s such a positive person,” his daughter says. “He says two things: He had a wonderful, very happy childhood, which helped keep him alive. And he says, ‘Honey, you cannot live with yesterday.’”

Her mother, Sala, also a Holocaust survivor, who died in 1990, was less sanguine; she often woke up screaming during the night. Nevertheless, she encouraged Chara and her sister Rose to blaze their own trails, not follow traditional women’s paths.

Her background, Schreyer says, “always knows where the exit is” from any room. “I always have a fear that life can change on a dime,” she adds. Her background also explains her fascination with difficult pieces of art, such as Gerhard Richter’s “Acht Lernschewestern (Eight Student Nurses),” portraits of the eight nurses killed in 1966 by mass murderer Richard Speck, or Joseph Beuys’ “Schlitten (Sled),” from his 1969 installation called “The Pack,” which consists of a sled, felt blanket, flashlight and a piece of fat, intended to recall his experience in World War II.

And this type of art creates practical challenges of its own. Schreyer has two daughters, and as Hutton recalls, “The youngest daughter wanted a dog, when she was eight or ten, begged and begged and finally got a Golden Retriever. After about three days of the dog being confined to the lower level, he got out and came bouncing up the stairs and took a giant bite out of that piece of fat. So the dog was gone in, like, five minutes, to be replaced with a guinea pig. The whole sled had to be sent back to Germany to be restored.”