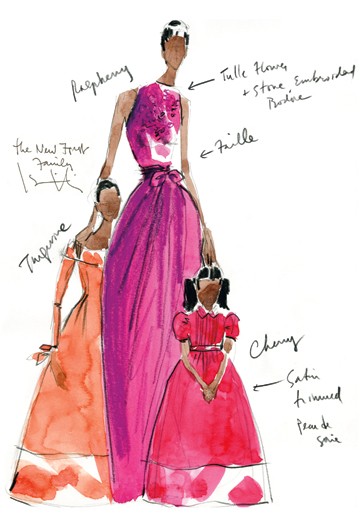 Who says these are bleak times? On one matter at least, designers are positively euphoric. That is the Obama presidency, a two-part point of light. While much of the glee centers around the President-elect and his policies, Michelle Obama radiates a powerful style all her own. So step aside, Angelina. You too, Madonna, not to mention the bevy of pop tarts, gossip girls, “High School Musical” grads and even potential Oscar divas, now all suddenly second-tier. The American fashion industry hasn’t had a catch this big since, well, since another icon of Democratic chic took up residency on Pennsylvania Avenue in 1961.

For the big guns at least, dressing Michelle may prove even more of a challenge, since her chic is more lowercase democratic than was Jackie’s. Throughout the campaign, the first lady-to-be has avoided all major names save Narciso Rodriguez, while showing a proclivity for locals (Chicago’s Maria Pinto), young types (Thakoon; Jason Wu) and cost-conscious labels (Donna Ricco; J. Crew).

Nevertheless, just about everyone yearns to dress Michelle, who could raise the profile of American fashion around the world. Yet with the exception of Maria Cornejo, her current favorites, as well as a few majors, declined WWD’s request for sketches. Some are loath to presume to offer unsolicited advice, while others, it seems, are definitely in the Inaugural sweepstakes and prefer, or have been asked, to keep their participation low-pro.

But plenty more happily offered their visions for Michelle and her charming first daughters, for the big day and evening events of Jan. 20.

See all sketches for Michelle>>