Dressing With the Stars

Cultivating its celebrity relationships has practically been written into Gucci's mission statement. 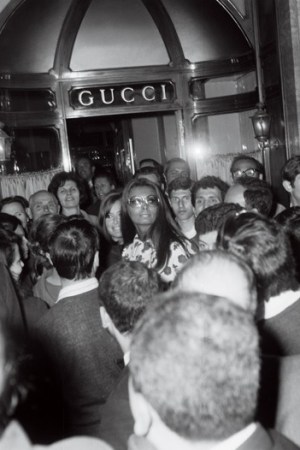 When Princess Grace strode into Gucci’s Via Montenapoleone boutique a half-century ago, she not only catapulted the Flora print to fame, she thrust the brand’s love affair with celebrities into high gear. Through the years, Gucci would become known for accessorizing and dressing everyone from stars and aristocrats to celebrity brats. Another notable moment came in 1995 with Tom Ford’s first — and quite provocative — fall collection for the house, from which Madonna selected her outfit for the MTV Video Music Awards that year.

Last May, creative director Frida Giannini restoked the brand’s jet-set fire. The setting was the red carpet at the Cannes Film Festival, one of the most glamorous venues in the film world. It was there, at the “Robin Hood” premiere,that the house launched Giannini’s Gucci Première collection of one-of-a-kind couture gowns on a radiant Salma Hayek.

Over the next few days, Hayek appeared twice more in Première dresses, along with a slew of other Gucci-clad VIPs including Naomi Watts, Kate Beckinsale, Jennifer Lopez, Marc Anthony, Camilla Belle, Léa Seydoux, Aishwarya Rai —  and Giannini herself.

In an era in which designers have gained star status themselves, Giannini is often found on the red carpet alongside Gucci’s roster of celebs, including current fragrance faces James Franco and Evan Rachel Wood.

The brand also has continued to solidify its presence in the music arena. In 2008, Gucci tapped Rihanna to appear in the ads for the Tattoo Heart Collection benefitting UNICEF, and last fall, Lopez and her twin tots starred in the Gucci children’s line campaign, which is also linked to UNICEF and to J.Lo’s Maribel Foundation. The involvement of Anthony, Lopez’s husband, made the partnership a family affair — Gucci dressed him in made-to-order pieces for the U.S. leg of his 2010 tour.

Celebrities have long fueled Gucci’s glam factor and, in return, the brand has focused on initiatives that support their industries. Over the last year, Gucci unveiled an annual award for Women in Cinema at the Venice Film Festival, a timepiece collection supporting the Grammy Museum and an additional $900,000 donation (bringing total contributions to $1.5 million) to The Film Foundation, Martin Scorsese’s nonprofit organization dedicated to restoring historical classics.

With this latest endowment, The Film Foundation presented digitally enhanced versions of two of Italian cinema’s most treasured gems from the Sixties: “Il Gattopardo” and “La Dolce Vita.” Unsurprisingly, a jaunt through the brand’s photo archives produces images of the films’ stars, Alain Delon and Anita Ekberg, both in Gucci.