The designer was the last in the “Fashion Talks” series at the French Institute Alliance Française. 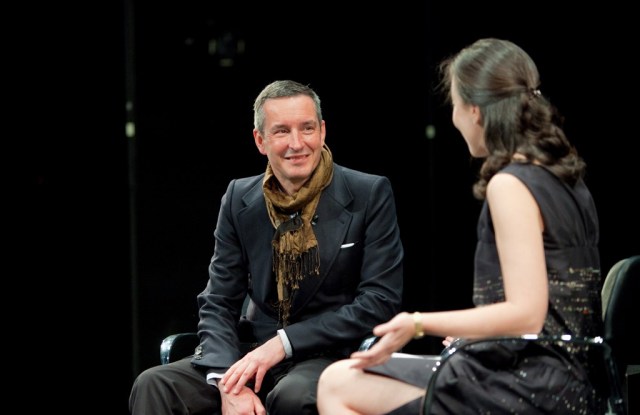 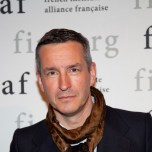 NEW YORK — “I am not a fashion designer who is making clothes just for fashion shows. I think that is a lie. I really make clothes to wear.”

So said Dries Van Noten, who, on Thursday, was the final designer in the “Fashion Talks” series at the French Institute Alliance Française here. During his conversation with Pamela Golbin, chief curator of the Musée de la Mode et du Textile at the Louvre, Van Noten reaffirmed his satisfaction at maintaining his status as an independent designer ever since establishing his label 27 years ago.

“I like my independence, the possibility [that] I can do whatever I want,” he said. “My design style is a very natural thing. You put colors together. It’s me asking myself a lot of questions.”

RELATED STORY: Stefano Pilati on the Past — and a Bit of the Future >>

Unlike many of his peers, Van Noten serves as both creative director and chief executive officer of his company, and he clearly enjoys the dual responsibilities. “Both things give energy to one another,” he told the crowd. “I like to be aware of what is happening on the business side. I like to talk with the stores that are buying the collections. I like to see how the merchandise is put in stores.”

The 53-year-old designer also genuinely seems content to focus on his ready-to-wear collections, as opposed to aggressively chasing other categories like accessories, though he does have them. As he put it, “Accessories are important, but not too important for me. I don’t want to become a designer [whose] main business is in bags and shoes.”

It’s not the only unique way he approaches his business. Van Noten also doesn’t advertise. “It’s a story. It’s not a person. I don’t have a muse,” he said. “You have to choose a model. Then people will say that is the only kind of person to wear the clothes and that is not for me.”

He offered a simple maxim for his anti-marketing marketing strategy: “People will buy the clothes for the clothes and not for the label.”

The designer decides instead to concentrate his efforts on his runway shows during Paris Fashion Week. “It’s really my way of communication,” he said. “You have 10 minutes to explain to your audience what you are doing.”

That said, Van Noten is aware of the power of social media and modern technology. “Three minutes after the show, you have the images of the shoes and the details from the back, the front and the side,” he said, with an awareness that fast fashion can use the immediacy of the runway images to translate ideas into clothes for the masses. “I think it’s a reality,” he said. “Modern people combine vintage with designer with pieces they buy at Zara. Everything has to be looked at with perspective. When people start to recognize that as the standard, there is no balance.”

He doesn’t think that’s an issue with his devoted client base. “I think when you see people wearing the clothes to underline their personality, that is the best compliment,” he said.

As for his work ethic, “I think the most dangerous thing is to make a schedule. You have to stay awake until the last moment.”