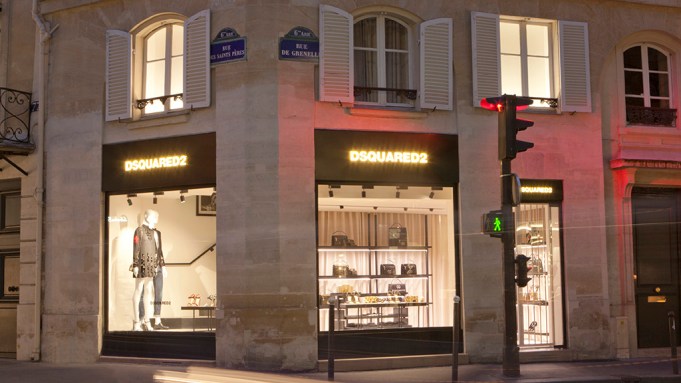 The new Dsquared2 boutique at the corner of Rue de Grenelle and Rue des Saint-Pères on the Left Bank showcases men’s wear and women’s accessories on the main floor, and kids’ wear and women’s wear upstairs, including a capsule line of cocktail and evening gowns.

Dsquared2 opened its first Paris outpost in 2011 on the Rue Saint-Honoré, one of the most sought-after addresses in Paris, with Alexander McQueen, Coach and Tory Burch among recent arrivals.

Meant to exalt the high-end offerings, decor features include Champagne-colored glass for shelves, black lacquered wood for floors and ceppo di Gré marble for the stairs and pathways.

“Paris is fascinating, elegant, memorable. You can breathe history, art and culture in every corner of the city. The city is really welcoming and it is somewhere where you want to spend time; this is the reason why we decided to strengthen our retail presence here,” the designers said in a statement.

Dsquared2 last year revealed plans to open 50 stores in five years. Units in Madrid, Munich and Barcelona are among the 10 planned for this year, topping up the dozen locations that debuted last year, including boutiques in London, Miami, Dubai and Singapore. The company also entered the Middle East, with new stores in Kuwait and Qatar, and plans to up its presence in China beyond its locations in Beijing and Shanghai.

The company was expected to finish 2015 with revenues increasing 10 percent to 230 million euros, or $255.2 million at average exchange rates.