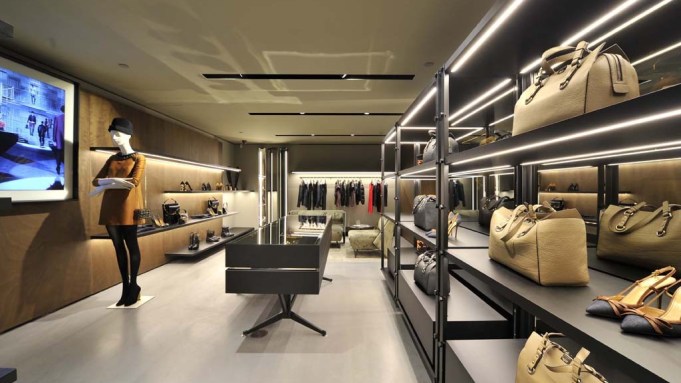 BEVERLY HILLS — Nearly two decades after it was founded by Dean and Dan Caten, Dsquared2 has opened its first U.S. store at 461 North Rodeo Drive here, heralding an American retail rollout that includes units in New York and Miami by the end of the year.

Designed by the Catens and architectural firm Storage, the store represents a new design concept dictated by the space. “When we came in and ripped out the ceilings, we discovered these 30-foot-high lofty spaces, so we kept the exposed tubing and brick and let that guide us,” said Caten.

The facade features alternating bands of concrete poured into black transparent glass and double-height front windows. The motif is duplicated inside using large wooden logs, a material typical in other Dsquared2 stores as an homage to the Catens’ Canadian heritage.

Spread over 4,500 square feet and two levels, the first of which features a 30-foot-high ceiling, the store flows from one area along a carpeted pathway meant to resemble a forest trail. Men’s wear is housed on the ground level and women’s wear below. Areas for apparel, accessories, shoes, underwear and fragrance are subtly divided through architectural elements such as cage-style dividers and tall screens with vertical metal rods. Again in the nature vein, circular-cut Okumè wood trunks with open veins are used in functional spaces such as dressing rooms, which also feature verdant vistas of Canadian forests. Further defining the spaces are ochre velvet armchairs illuminated by floor lamps.

“In America, we are not perceived as a whole collection because you don’t get the whole message in other stores. This is finally our chance, and it will also help our department store and wholesale business in the way they sell and buy,” Caten said.

All of Dsquared2 women’s collections are available in the store, including a capsule line of cocktail and evening gowns designed for awards nights.

The Italian-made brand, which has been manufactured and distributed by Renzo Rosso’s OTB SpA production arm Staff International since 2001, operates 31 other stores in Eastern and Western Europe and Asia.

The New York store, located at the corner of Spring Street and Broadway in SoHo, will be the largest at 6,467 square feet, and is set to open by Christmas. The Miami store, 2,000 square feet at the Bal Harbour Shops, is slated to open timed to Art Basel in early December.

The store opened the same day as Saint Laurent’s women’s and men’s concept stores. Rodeo Drive is in the midst of a renaissance, in part because the 10-year leases for many flagships have been renewed in the past year and renovations are under way for longtime tenants such as Gucci, which is set to unveil its new look next month; Coach, which is under construction; and Louis Vuitton. Jimmy Choo unveiled its redesign earlier this year. A slew of openings this year includes Céline, Vera Wang, Zadig & Voltaire and Tory Burch, plus Burberry and Brunello Cucinelli later this fall.