The Duchess of Cadaval, known as Claudine to her friends, will host a summer exhibition of exquisite wedding dresses at her family palace in historic Évora, Portugal. 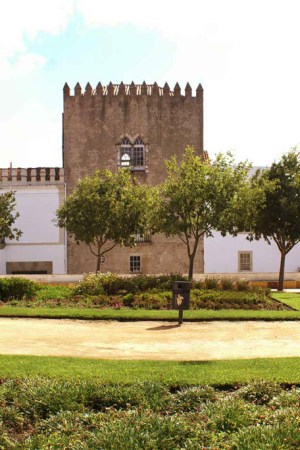 A cache of exquisite wedding dresses is headed for the aisle once more — and in one of the most atmospheric private churches in Europe.

The Duchess of Cadaval, known as Claudine to her friends, is to host a summer exhibition of gowns and accessories at her family palace in historic Évora, Portugal, which dates back to the 14th century and today attracts some 40,000 visitors a year.

“Unforgettable Wedding Gowns,” curated by retired couturier Hubert de Givenchy and opening June 7 for a three-month run, marks the first time the vivacious Cadaval has staged an exhibition in the Church of Saint John the Evangelist, noteworthy for its floor-to-ceiling blue and white tiles dating from 1711.

It was de Givenchy, a great friend of Cadaval’s, who suggested the showcase, partly inspired by the church’s spectacularly gilded main altar.

Dresses include three from de Givenchy’s archive, three from Spain’s Balenciaga Museum, the Yves Saint Laurent gown of Baroness Hélène de Ludinghausen, the dress of Princess Minnie de Beauvau by Philippe Venet, and the dramatic style Carolina Herrera designed for Cadaval’s daughter, who entered the church a Portuguese duchess during the 2008 ceremony, and exited as Princess Diana of Orléans, having married Prince Charles Philippe, Duke of Anjou. Lesage embroideries scattered over the long train spell out her transformation, mingling the Cadaval coat of arms with fleur-de-lis.

The exhibition coincides with surging tourism in Portugal, along with an influx of wealthy French eager to escape onerous taxes at home, and indulge in the coastal nation’s pleasant weather, cheap property and delicious cuisine.

“Évora is becoming more and more popular and known. There is lots of history,” Cadaval said about the city, a UNESCO World Heritage Site prized for its well-preserved town center, its Roman temple, Chapel of Bones — and local recipes including carne de porco à alentejana, or braised pork with clams.

While most visitors hail from nearby European countries, tourist flows from China, Brazil and Japan are rising, she noted.

The forthcoming exhibition marries two of Cadaval’s passions — Portugal and fashion — although she opted not to include the gown de Givenchy designed for her 1965 wedding to Jaime III Álvares Pereira de Melo, 10th Duke of Cadaval.

In an interview on the breezy terrace of the Memmo hotel in the charmingly rickety Alfama district of Lisbon, Cadaval related how she opted for a white coat and a gazar skirt suit for her nuptials, with Yul Brynner acting as best man and Truman Capote the surprise crasher, dropping by for coffee.

She hinted her personal wardrobe, bulging with couture dresses by de Givenchy, YSL, Valentino, Balenciaga and Chanel, might be the subject of future exhibitions, now that she’s purchased Bonaveri mannequins, the same ones used by Yves Saint Laurent during his ready-to-wear heydays.

Cadaval has keen fashion instincts, and financed Giorgio Armani’s entrée into the U.S. market, opening his first boutique on Madison Avenue at 63rd Street in 1980, selecting an Italian architect for the project. “It was a very different period compared to today,” she said.

Working with two other partners, Cadaval also distributed collections by Courrèges, Guy Laroche and Lanvin. In 1982, she opened Avenue Montaigne on Madison Avenue in New York, billed as one of the first independent boutiques to stock multiple French labels and American ones such as Oscar de la Renta and Carolina Herrera. She was also behind Valentino’s first Paris store on Avenue Montaigne, where Chanel is located today.

Jerry Zipkin, dubbed a “walker” by WWD, was a close friend, lunching with her frequently at Mortimer’s and introducing her to then First Lady Nancy Reagan, who would go on to make an official visit to Portugal in 1985.

Alighting upon Ronald and Nancy Reagan lunching with Richard Nixon one day at Le Cirque in the Eighties, Cadaval was flabbergasted at the sight of this power table — until President Reagan deflected the attention to Zipkin, opining: “He’s more known than us!”