Mrs. Brown, as the collection is named, puts the spotlight on a girl’s cool inner tomboy. 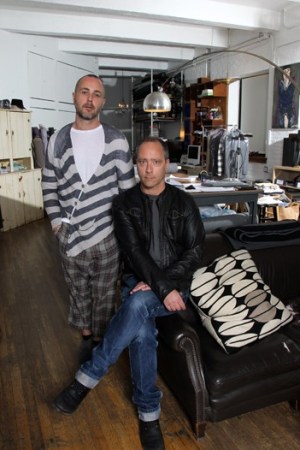 Duckie Brown’s Steven Cox and Daniel Silver have always been fearless with their men’s wear designs, openly flirting with what some might dub more feminine overtures: crafting jackets from floral lace or sending shocking pink pants down the runway. “I suppose our stuff sometimes lends itself to women’s wear,” says Cox. “There’s a sense of color, a sense of humor and fun. We use organza, gazar, chiffon, which are classically women’s fabrics, but what makes a fabric a man’s or a woman’s? It doesn’t have a penis or a vagina.” Silver chimes in: “We’ve never been very good at limiting ourselves.”

Given their no-holds-barred approach, it’s not surprising that Cox and Silver are finally — after designing men’s clothes for 10 years — diving into women’s this fall. (They don’t do resort.) What is startling, however, is the collection itself: There’s nary a female note throughout. Instead, Mrs. Brown, as the collection is named, puts the spotlight on a girl’s cool inner tomboy.

The women’s line begins very much like Duckie Brown did, with a tight, 17-piece collection, but anchored in knitwear. “We started Mrs. Brown with knits because women always love a great knit,” says the Toronto-born Silver, a former glove designer and television producer. “We thought it would be a great introduction to the market. We could test the waters.” Theirs is an ultraspecific take on the purly goods, to boot — the entire debut revolves around distorted, torqued knitwear, which they began dabbling in two years ago for their men’s pieces. “We use this really f–ked-up yarn that twists around,” explains Cox, who studied men’s wear at Liverpool University in his native U.K. before racking up a busy résumé in New York designing women’s clothes for such brands as Tommy Hilfiger, Club Monaco, Theory, Nine West, London Fog and Esprit. “We give the factory a drawing of a basic round-neck sweater, which should have seams and set-in sleeves. But when you do it on a circular knit machine with torque yarn, it completely warps around the body.” He pulls out a sample, demonstrating the off-kilter sleeves and one-sided ruching. Then out comes a more dramatic example: a chicly skewed striped cardigan with an asymmetric placket — its origins are in a straightforward spec of a man’s three-button jacket. “There’s even a collar,” says Cox, lightly tugging at the floppy neckline. He adds that layering is core to the debut. “There’s a signature in Duckie Brown that was always long over short over short over long. It’s slouchy, it’s comfortable. My brother and his wife have this phrase that inspired us: ‘comfy cozy.’ It’s what they call the clothes they wear when they get home, like sweatpants.”

So far, A. Turen in New York, Abersons in Tulsa, Okla., and Distractions in San Francisco have picked up Mrs. Brown for fall. In the spring, the duo plans to expand the collection — which also features a tank dress, a wrap hoodie and snug beanies — to include woven shirts, leather and denim jackets, skinny pants and a drop-crotch trouser. (The two are known for their drop-crotch pants for men.) The prices will also fluctuate accordingly. Though set to wholesale at the contemporary level, from $30 to $375, prices may vary as categories are introduced. “It’s a designer label,” stresses Silver, noting that their men’s line is similarly positioned and there will always be a dialogue between the two collections — using the same fabrics, for instance.

“This is absolutely the DNA of men’s wear for women,” Silver says. “We’re not doing girly-girly clothing, we’re not doing ballgowns — at least not today.”

As for the name Mrs. Brown, it’s not as simple as one might think. The beauty of the handle Duckie Brown, they say, is that it represents both their whimsical and serious sartorial sides; lopping off the fanciful “Duckie” does not signal a more straightforward vibe to the women’s line. “Mrs. Brown is a reference to Queen Victoria,” explains Cox of the nickname given in jest to the queen’s personal servant John Brown.

“And there’s the song from the Sixties by [the band] Herman’s Hermits, ‘Mrs. Brown, You’ve Got a Lovely Daughter,’” says Silver. “We didn’t use Miss because it sounded too missy. And Ms. was a very Seventies, Gloria Steinem kind of thing. Mrs. Brown sounds grown up, but could be anyone from 20 to 80.”