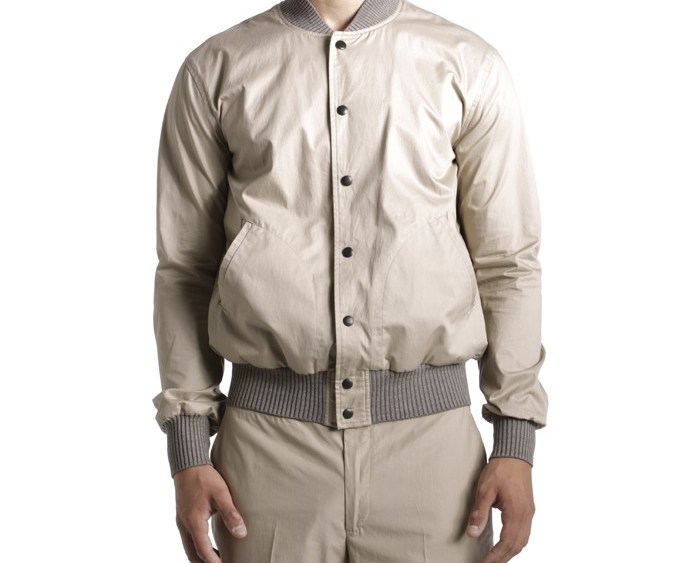 The men’s department store brand is upping the ante for fall with its new Perry Ellis by Duckie Brown collection, which is aimed at upscale specialty retailers. The line is meant to elevate the entire brand with consumers and fashion insiders, who will get a full look at the collection during New York Fashion Week at a runway show on Sept. 11 at Highline Stages.

“We are bringing a sense of relevance to the brand in a very strong way and reclaiming our position as a modern brand with an innovative approach to the classics,” said Doug Jakubowksi, chief merchandising officer at Perry Ellis, a division of Miami-based Perry Ellis International. “Perry Ellis was one of the top-three American designers and this validates our positioning, by speaking to both the consumer and the fashion community.”

The inaugural collection comprises 32 looks and more than 200 individual pieces, centered on khaki, but with a modern twist.

“Perry wore khaki every day, but we’re expanding the idea and color range,” said Daniel Silver, who designs Duckie Brown with Steven Cox — noting that the palette will range from off-white to pale pink and gray. “That was the starting point. But we really felt we wanted to make a collection without all the tricks. It’s very simple, clean and beautiful and there’s not a lot of hardware.”

Added Cox: “An army of khaki men — that’s where it started and then it evolved from there.”

The designers expect the collection to appeal to both the “everyman” as well as a more fashion-forward shopper. Short trenches, work jackets, narrow trousers and updated shorts will appeal to most men, they believe. Even the more fashion-forward looks will be understood by a larger customer base than the core Duckie Brown constituency. “This is much more commercial,” explained Cox.

Duckie Brown was launched in 2001 and shows regularly during New York Fashion Week, having developing a reputation for melding whimsical sportswear with elegant tailoring. The job-juggling duo also designs the Florsheim by Duckie Brown footwear line and a capsule collection for New York specialty retailer Rothmans, under the Mr. Brown by Duckie Brown label that retails at significantly lower prices than the designers’ flagship line.

Duckie Brown was nominated for the Council of Fashion Designers of America’s Perry Ellis New Menswear Award in 2006 (which is now called the Swarovski Award for Menswear), followed by a nomination for the CFDA’s Menswear Designer of the Year in 2007.

Silver admits that Duckie Brown was a “surprising choice” to create a collection for Perry Ellis. “There are a lot of other designers they could have gone with,” he said, and as a result, there’s a certain “curiosity factor” about what the line is going to look like.

“That lasts one season and we’ve got to get it right because we only have one shot.”

British-born Cox said he wasn’t familiar with the original Perry Ellis designs. “I’m not American and the only thing I knew about Perry was what he looked like,” he said. To get up to speed, Cox and his team watched 104 DVDs of archival Perry Ellis designs, “but only while he was alive. We didn’t do it to copy anything, but to have a sense of it. I took notes and made sketches.”

Among the influences that stuck in his mind were the short boxy jackets, the color palette and the unusual proportions, he said. Perry Ellis was also known for his polka dots, which Cox and Silver will revisit in the collection. The duo joins a clique of influential designers who have previously passed through the design rooms of Perry Ellis, including Marc Jacobs, Tom Ford, Isaac Mizrahi and Patrick Robinson.

Since the partnership was conceived and announced in February, retail prices for the collection have increased from the original plan. Sportcoats will now sell for $700 to $1,100, cashmere sweaters for $500 to $600, sport shirts for $195 to $250 and trousers for around $300. “The increases happened organically. We wanted to make sure we were using the best fabrics and construction. It puts us in the designer zone, but not in the high-end of the designer zone,” said Jakubowski, noting the collection is produced in Italy and the U.S. in different factories than the core Perry Ellis assortments.

Distribution has yet to be finalized, with Perry Ellis targeting directional specialty retailers. Eddie Marquez, an independent wholesale consultant who has worked with brands like Billy Reid and George Esquivel, is overseeing sales and will be showing the collection out of a suite in the Mercer Hotel next week.

“We’re not trying to re-create Perry Ellis,” Silver said, “but we’re reinventing some of the elements of Perry — with our spin on it. We hope we come to it with a fresh set of eyes. Anyone wanting to see the old Perry Ellis will be disappointed. That’s not our mission. Fashion is constantly changing and it’s our job to make it relevant for today. It will be new, yet honor the past.”

In another evolution for the brand, Perry Ellis is revamping its advertising this fall with a new campaign under the “Very Perry Ellis” theme. Created by New York-based Yard, it leaves behind the erstwhile beach scenes of recent Perry Ellis campaigns for a more whimsical approach.

Four models were shot in black-and-white, including Matt Norklun, who starred in Perry Ellis campaigns in the Seventies and Eighties. The various shots are splashed with polka dots, a paper bow tie and an oversize flower, adding color and an element of frivolity to the images.

“We wanted to invigorate our brand with an updated personality to appeal to a younger man,” said Carmine Petruzello, president of Perry Ellis Menswear. “After months of research, we found that a sense of levity and irreverence was not only key to that consumer, but also embodied in our founding designer.”

The campaign — which is accompanied by a redesigned logo and product packaging — launches in the September issues of GQ, Esquire, Men’s Health and Out, as well as outdoor and in-store. The ad spend is flat with last year but the out-of-home component, which includes billboards in New York and Los Angeles, has been increased while other categories have decreased. Last year, Perry Ellis spent $9.2 million on advertising, according to Kantar Media figures.