The designer’s expansion in the region is part of a franchise agreement with Al Tayer Group. 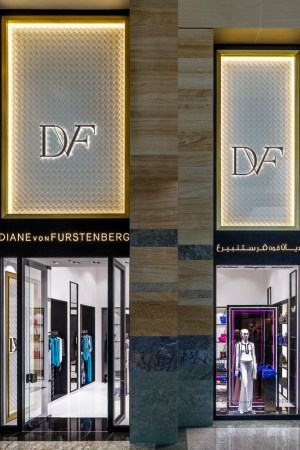 DUBAI — Diane von Furstenberg is expanding her footprint in the Middle East with four new stores opening in Dubai in the coming months as part of a franchise agreement with Dubai-based Al Tayer Group.

“Ever since I visited Dubai the first time, I was impressed with its international, glamorous energy,” the designer told WWD. “DVF and Dubai are the best match and I am excited to grow our presence there.”

The new boutiques are at key retail locations throughout the emirate: City Centre Mirdif, which opened last week, Festival City and City Walk, both of which are set to open later this month, and Mall of the Emirates, opening in March 2016. The Al Tayer Group also operates a DVF store in Abu Dhabi.

“Expansion in the Middle East is a strategic priority for us,” said Paolo Riva, chief executive officer of Diane von Furstenberg. “We want to inspire and wardrobe the DVF woman for every moment of her day — no matter where she is in the world.”

The boutiques will showcase Diane von Furstenberg ready-to-wear, as well as a wide array of her accessories, including handbags, shoes, scarves, small leather goods and sunglasses.

Each store’s design evokes the playful sophistication and modern femininity that are signatures of the brand with a white, gallerylike interior. Facades feature chain-link detailing, illuminating the store frontage, with signage in both English and Arabic.