Move over Mel Brooks, and make way Woody Allen. Alber Elbaz has a microphone in his hand, a bow tie around his neck, and he's dangerous. 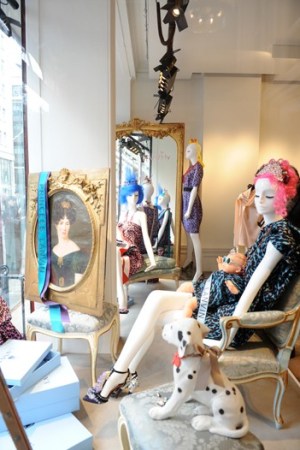 LONDON — Move over Mel Brooks, and make way Woody Allen. Alber Elbaz has a microphone in his hand, a bow tie around his neck — and he’s dangerous. On Thursday, the designer had his audience in stitches during a spirited presentation of his summer collection to mark the opening of Lanvin’s first store here.

“I dress women. I don’t undress them — unfortunately. My mother would be happy if I did,” Elbaz told a gathering of friends, private clients and press at the Mount Street store as models showed off his bejeweled, twisted and draped dresses and glittery accessories.

Elbaz riffed on his fashion philosophy, put forth views on fabrics and craftsmanship and joked about Lanvin’s easygoing collaboration with the Swedish brand Acne. “It’s so nice when Acne tells me, ‘No problem, we can do that.’ I live in Paris, where you ask a cab driver to take you somewhere and he says ‘No.’”

The new store, at 128 Mount Street, is across from the Connaught Hotel, and not far from the Balenciaga, Marc Jacobs, Christian Louboutin and Annick Goutal stores. The Lanvin unit spans 2,700 square feet over four levels, and carries the brand’s full offer, including ready-to-wear, jewelry, accessories, denim and Blanche, the bridal collection.

Elbaz said he felt compelled to carry wedding dresses in the London store because: “I have friends — Liz Taylor types — who are on their third and fourth weddings. They tell me they need a different dress for each one.”

On the ground floor there is a special “logo room,” which showcases clothing and accessories featuring the Lanvin mother-and-daughter symbol and the shoe collection. The store has big bay windows facing Mount Street, the floors are done in Versailles parquet, and the indoor walls, with their 19th-century moldings, are covered with glass plates.

Elbaz said the landlord would not allow Lanvin’s team to change the walls in any way. He said he was so inspired by the covering that he created jewelry that’s covered in plates of glass.

A company spokeswoman declined to give first-year sales projections. The street is hot property, and rents are said to range from 200 pounds to 265 pounds, or $290 to $390, a square foot.

The store’s interior is a mix of periods and moods: There are Thirties-style, curved lacquered cabinets, reconditioned Georgian fireplaces and cornices, raw steel armoires and chairs upholstered in Lanvin logo fabric.

Elbaz acknowledged that it was a difficult climate for a luxury store opening, but there was no stifling a woman’s desire to look good. “Next to chocolate or a rose, I think the only thing that can make a woman happy is maybe a pink dress,” he said.