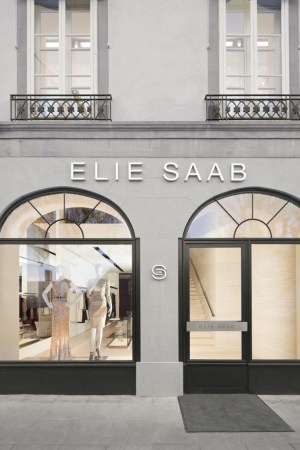 PARIS — Elie Saab is growing its international retail footprint with the opening of a freestanding store in Geneva.

The 1,700-square-foot outlet at number 10 of the prestigious Quai Général Guisan, overlooking Lake Geneva, spans two floors and was designed by Saab in collaboration with architect Chakib Richani, who also worked on the other stores in the brand’s retail network.

The building retains its original facade with two arched shop-front windows, the only direct light source for the space, which Saab and Richani “sculpted” to allow for maximum height and luminosity, highlighting minimalist fittings, the brand said.

The store officially opens today and is showcasing the designer’s pre-fall and fall 2012 ready-to-wear collections as well as shoes, bags and other accessories.

The Geneva unit is Elie Saab’s fifth freestanding store, adding to boutiques in Paris, Hong Kong, Dubai and Beirut. It also has shops-in-shop in London and Mexico City.