The temporary store, which will be open through at least the fall, is an experimental showcase to test design, merchandising and retail concepts. 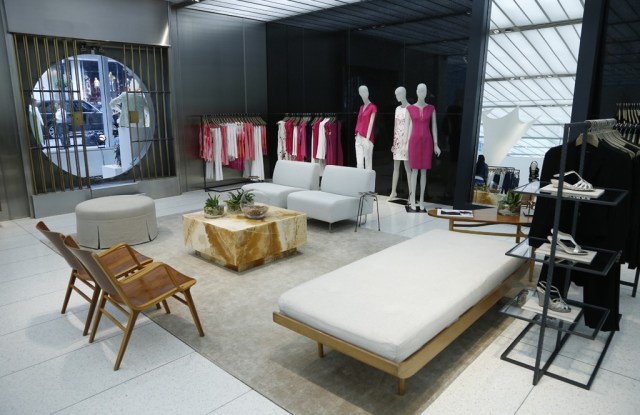 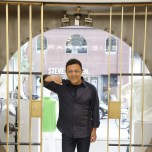 NEW YORK — The new Elie Tahari store at 510 Fifth Avenue here is not a conventional retail space. Passersby may glimpse pattern cutters and sewers plying their trades in the oversize windows of the store, or witness a photo shoot inside, with models posing and then disappearing into the conveniently situated fitting rooms to change outfits.

Elie Tahari is using the temporary store, which will be open through at least the fall, as an experimental showcase to test design, merchandising and retail concepts. Additionally, it’s a theater that brings the company’s design and production capabilities alive, hence the employees at work in the windows.

The cutters and sewers have only a short elevator ride down from the Tahari design studios on the fourth floor. The company occupies the top three floors of the five-story glass-encased jewel box, including a recessed top floor that houses company chairman Elie Tahari’s office and a wraparound terrace. Retailer Joe Fresh operates a two-level flagship in the building, adjacent to the Tahari store.

“We are taking the energy of the design studio on the fourth floor and bringing it down here,” said Tahari. “It will serve as a laboratory for all our stores. It’s fun, organic and alive. It reminds me of the markets I used to go to as a child in Iran.”

The 5,400-square-foot store, which opened June 3, carries women’s ready-to-wear, shoes, bags and accessories, as well as men’s wear, which occupies a back corner. The bright, airy space is sheathed in marble walls and pale terrazzo floors, with fixtures and furniture that reflect Tahari’s passion for midcentury design, including tables, sofas and chairs from Hans Wegner, Edward Wormley and Carl Auboück — echoing the Modernist look of the light-filled design and sample rooms upstairs. A sculptural room divider in stretch nylon by Gisela Stromeyer floats among the racks of dresses and jackets in the store.

A gallery of memorabilia marking Tahari’s 40th anniversary will be installed along one wall of the store for New York Fashion Week.

Located on the corner of 43rd Street, the historic building was originally designed by Gordon Bunshaft of Skidmore, Owings & Merrill and completed in 1954. Its landmark status created some obstacles to building out the retail space but Tahari countered that “challenges are a blessing” and that he’s always dreamed of operating a retail space below his design studio.

Tahari, who is a savvy real estate investor, previously owned the entire building. He acquired it with a partner, Tahl Propp Equities, in 2001, later taking full ownership and then selling it to Vornado Realty Trust in 2010. Tahari leased back the top floors as part of the sale.

Apart from the temporary Fifth Avenue store, Tahari operates 34 freestanding units in the U.S. Internationally, there are collection boutiques in Istanbul, Qatar and Poland, as well as shops-in-shop in the U.K., Spain, Dubai, Mexico, Indonesia and South Korea.