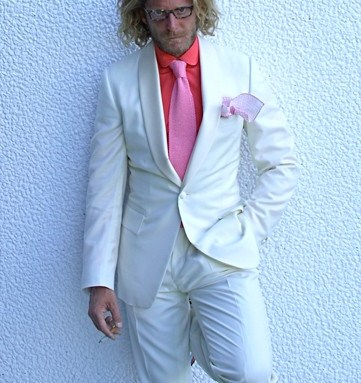 “The collaboration is an important step for Italia Independent and for its ever-developing idea of style,” Elkann said. “We view made-to-measure as a possibility for our brand to better serve our ‘independent’ clients and to export the savoir faire of our Italian tailors.” Italia Independent already produces ready-to-wear, eyewear and hats.

Elkann, 32, will unveil the project on June 23 at Santandrea’s showroom here on Via Bagutta 8 with the tailor’s owner Luca Trabaldo Togna, the fifth generation of the Trabaldo Togna textile mill. Trabaldo Togna purchased Saintandrews in 2006, renaming it Santandrea. The company, which also supplies Ralph Lauren for its Purple line, among others, counts 165 tailors who produce suits entirely by hand, using pattern frameworks, silk thread and premium quality fabrics, including linings in genuine horsehair. It was founded in 1968.

“With the new collaboration, the timeless elegance of Santandrea is transferred into the creative modernity of Lapo Elkann and Italia Independent, allowing Santandrea to identify with the concept of ‘contemporary tailoring,’ which is sharper, more dynamic and rigorous,” explained Trabaldo Togna.

Elkann acknowledged that during an economic crisis, consumers were likely to purchase fewer big-ticket items but they “will never abandon made-to-measure.”

“Made-to-measure is not fashion. It is about style and elegance,” Elkann said. “People tend to forget that [made-to-measure] is a common practice for Italian men. In all Italian cities, they use a tailor or a shirtmaker more than one thinks. It is not a question of wealth.”

An Italia Independent custom-made suit will retail from 3,000 euros, or around $4,100 at current exchange. Elkann is hoping the relatively low price tag and the element of customization will attract a younger audience.

“Every customer has his own personal taste, which can be worked into the suit,” said Elkann, who almost always has an Italian flag stitched on the inside of each of his. “A man needs a clear idea of the kind of suit he wants — working wardrobe, sportswear or formal occasion — then the key is to work with the tailor to find the right cut and fit, but without forgetting to add a personal touch: for example, adding a special pocket for the iPhone or BlackBerry.”

Elkann, who is a regular at several Italian tailors and on Savile Row, is also hoping to capitalize on the loyalty inherent to the category. “The relationship you have with your tailor should be unique and one which takes time to build. It is very much like the relationship you have with your car, or your barber. Once you have it is very difficult to go to a different one,” Elkann said. “For a man who likes style and elegance, detail and materials…spending time with his own tailor is a pleasure. I would say it’s almost a hobby.”