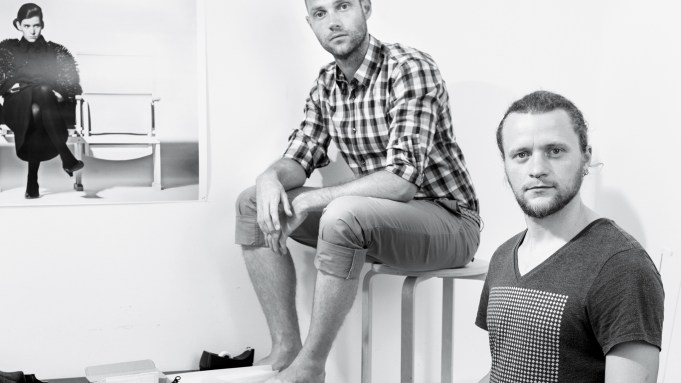 The trio met while studying fashion at Halle’s Burg Giebichenstein University of Art and Design in eastern Germany. Now in its fifth season, Zukker aims for strong statement silhouettes punctuated with wry humor. For fall, they take loose inspiration from competitive cycling, including the polka-dot jerseys worn by racers most skilled at climbing, dubbed “King” or “Queen of the Mountains.” Those bike-a-dots appear as cutouts in a delicate sheer on a fitted shirtdress, or aerodynamic collars on zip-up blouses. Technical fabrics comprise a black bow-belted raincoat and a full skirt.

Coats are oversize or cropped, and color- blocked in earth and sky tones — some trimmed with fake fox, others double-breasted with megabuttons. A favorite material, Danish Kvadrat furnishing fabrics, give a sturdy backdrop to forms both boxy and billowing.

Designer: Antonia Goy
Founded: 2006
Based in: Berlin
Showing: Berliner Mode Salon
Backstory: Many labels dream of a flagship retail presence, but for Antonia Goy, the decision to close up shop after nearly a decade meant stepping back could be a way of moving forward.

Goy founded her namesake label in 2005 after graduating from Berlin’s Weissensee School of Art, opening a shop and launching a year later. Her well-cut, feminine pieces were coveted by fashion insiders, but running the store left little time. Determined to make collections and commerce, Goy mostly skipped Berlin’s fashion weeks, putting time into international trade shows. These days, Goy and her business and life partner Björn Kubeja, a trained architect, who joined the brand in 2009, can be found off-the-beaten path in an airy industrial zone atelier sought out by established clients for private shopping.

This season, she’ll present at the Berliner Mode Salon. Key looks draw from martial and military influences, channeled through a lens of protection and comfort especially desired after the Paris attacks. Functional and decorative uniform elements pop up on classic shapes like the bomber and blazer, remixed in fine fabrics. Tough is tempered by transparency, cocooning forms, and delicate digital flower prints on silks.

Instead of settling in a bustling district of young people, the 2012 Esmod graduate, now 28, suitably moved into a 19th-century industrial compound in remote — and very bourgeois — Zehlendorf.

She focuses on the virtues of discipline, precision and quality, building her concept of contemporary women’s wear on German traditions. She concentrates on revived local Berlin and Brandenburg handicrafts of weaving and knitting, contrasting them with sturdy wool and Indian pearl embroidery. The cuts are geometric and sleek, revealing details such as dainty buttons and ribbons only at second glance. Muted colors, black and dark wintery tones of blue, green and red, punctuate the aesthetic understatement.

“It’s an homage to my grandmother — a disciplined, confident, yet always chic woman who helped form my image of beauty,” she explained.

“I want to make something sustainable. I took time to refine my signature before showing at Berlin Fashion Week for the first time last year and I’m still taking time to develop long-term relationships with my collaborators and visit every workshop we’re working with.”

Her most precious collaboration is a jewelry line of sculptural gold and silver mélanges, a partnership with her goldsmith mother Barbara Friedlaender and, at times, with fellow young designers like Bobby Kolade.

“It’s bold to start at such a high stake,” she said, “but I want to create lasting value.” — QUYNH TRAN