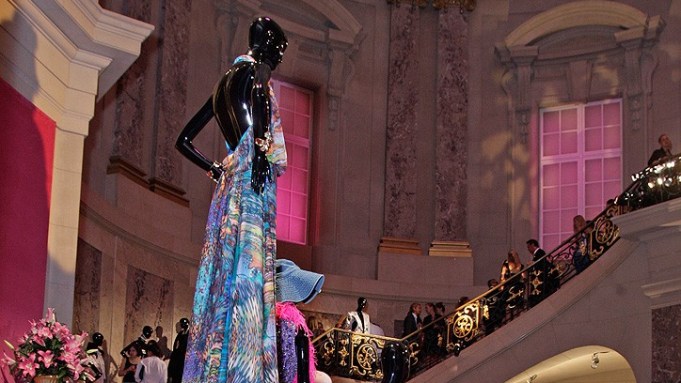 BERLIN — There was no doubting the energy pulsing through the city during Mercedes-Benz Fashion Week Berlin last week.

The four-day event, which ended Saturday, saw a packed city, with taxis scarce and subways jammed: not Berlin’s normal scene. And the calendar was chock-full, not only because Bread & Butter, Premium and four other trade fairs were running concurrently, but owing to scores of designers and fashion brands that had chosen the German capital as their showplace of choice for spring 2010.

IMG, organizers of the MBFWB runway shows, said the shows in the tents and off-site attracted more than 22,000 people, up from 18,000 in January. Now in its fifth season, MBFWB has become a meeting place for major German fashion editors and editors in chief. International attendance was up, as well.

That being said, Berlin remains a mixed bag from a fashion point of view, and this season especially, it was the newcomers and lesser-known labels rather than the more established brands that generated the most attention.

Lala Berlin, designed by Leyla Piedaysesh, created a lot of buzz with her blend of sophisticated glamour with a rough, hard-core edge. Having started out in 2004 knitting all her own accessories, Piedaysesh stuck to her roots with oversize chunky sweaters and floating floor- length cardigans. By combining the knits with slinky silk evening dresses, she created her most glamorous collection to date.

But if Lala Berlin has gone glam, the urban edge is still very much there, with leather cummerbunds, metallic patches and frayed hems adding a raw touch to some sophisticated pieces. A silk, full-length evening dress was made funky with zips hanging down the back, while a pretty cotton shift dress got a contemporary twist with frayed seams and gold plates. The rough-meets-smooth theme was illustrated by feminine printed silks decorated with workmanlike nuts, bolts and cogs.

While last January’s belts-and-bags-only Kaviar Gauche runway show left many in the audience wanting more from designers Johanna Kühl and Alexandra Fischer-Roehler, this spring’s debut of the label’s Bridal Couture collection left far more wishing it was time to tie the knot — especially those who’ve left their Cinderella fantasies behind.

This young but sophisticated Berlin-based duo came up with myriad cool bride options: short frocks tied at the shoulder with a floor-length bow or covered all over with shimmy shake fringe; laser-cut leather pants paired with a silk organza shirt hitched up and tied; jumpsuits and pants ensembles, and even a little coat dress, all accessorized with multistrap- and chain-accented sandals. And all capable of being worn again, long after the honeymoon is over.

Mongrels in Common made its MBFWB debut with an appetizing collection using tanned salmon skins. All the leather that appeared either as triangular accents or full skin pants, bras, or little cropped jackets is derived from bio-salmon skins tanned without the use of chemicals under the Nanai trademark.

A favorite with young professional women, who nonetheless want a break from typical 9-to-5 gear, Mongrels in Common’s design team of Christine Pluess and Livia Ximénez-Carillo specializes in disparate, mongrelized mixes. For spring, they confronted softness with structure. Shaped bustier dresses topped roomy, cotton blouses or unexpectedly billowed at the back, as did a simple lavender shirt tucked into skinny, salmon skin pants. Their signature slip-on shirtdress appeared in taupe silk, subtly darted and accented with metallic salmon skin, while an easy black silk shift took shape, bloused and bubbled in front with a bold, golden industrial zipper running the full length in the back.

Launched in 2005, Penkov, another MBFWB newcomer based here, aimed to fuse jewelry and clothing, hitting the mark with draped chains, though the metallic leather appliqués weren’t always on target. Designer Bernadett Penkov may have been inspired by the film “Blade Runner” for spring, but there were touches of Maria and Metropolis to be found in her elegant dresses, pants and jackets in mostly off-white, apricot and light gray silk crepe, twill and chiffon.

The blend of a feminine Forties look with a futuristic bent was clear in a taupe jacket with copper mesh sleeve details, and a sculpted bustier dress with a sheer skirt. Penkov’s subtle superwomen carry the weight of the world on their delicately strong shoulders, sometimes with visible shoulder pads.

German-born and New York based designer Kai Kühne, who showed in Berlin for the second time, went razor sharp with intricate, geometric cuts in black or metallic-toned silk. Among the highlights: widow-peaked short shorts, the legs coming to an unexpected point in the front and worn with tailored sleeveless jackets with “upholstered” shoulders or a simpler leather vest; all manner of little black dresses featuring geometric seaming or cutouts and a skin-tight metallic origami sheath and its sister high-waisted pencil skirt, paired with a tiny black jersey top. While one needs to take a close look to figure out Kühne’s constructions, his bold, megabead jewelry was easily grasped — and coveted — by all.

Sabrina Dehoff, on the other hand, represented fashion’s soft side. The Berlin designer, who got her start doing delightfully diminutive jewelry, made a silken MFBWB debut with satin dresses, tops and bottoms that floated as easily as her tinted cloud nine or more stormy tie-dyed prints. There was a scarf-like feel throughout, some tops and dresses simply tied in back, others with excess fabric cleverly but not trickily gathered and clasped in the back. Dehoff’s beautifully made frocks won an approving nod from Berlin’s tony Departmentstore Quartier 206, among others.

Local designer Frida Weyer’s professional runway premiere during MBFWB clearly focused on special occasion dressing. And more intriguingly, it offered a range of nighttime froth for — and by — a member of a jeans born-and-bred generation that’s possibly never worn a party dress.

While innocence and Berlin don’t generally go hand in hand, Weyer is an unabashed romantic who loves softly gathered silk chiffon in Jordan almond pastels, flowers and lace. However, she showed she can also take a more siren-worthy approach with tight-fitting sheaths, or hit the clubs in little flapper/go-go hybrids styled in St. Gallen embroidered lace tear-drops.

One of fashion week’s biggest surprises, however, was the Designer for Tomorrow Award, sponsored by German specialty store chain Peek & Cloppenburg, Düsseldorf. Now in its second season, the eight student participants not only sent out examples of their vision and promise. The quality of execution was so exceptional that even the most far-out creations, like Sasa Kovacevic’s three-dimensional knit men-who-fell-to-earth ensembles, made a convincing transition from concept to reality. Chalk it up to hand work on the part of the students — speculation that P&C had helped with the garments’ production proved totally unfounded.

Juries always politely say the choice of a winner was difficult, but this time they weren’t kidding. Sam Frenzel’s must-have accessories — sculptural acrylic bow belts, mega 3-D Lucite necklaces and bracelets, unusually proportioned clutch bags, some to wear attached to the arm, and snakeskin leggings — helped clinch the decision. But it was also his audacious combinations of shape and texture that earned him the title.

Also of note in the up-and-coming class: first-timer Michael Sontag’s airy cottons, folded, cinched, ruched but essentially clean in look and interesting in volume; Starstyling’s playful do-it-yourself aesthetic featuring pouches and pockets to stick on and peel off garments or even limbs with Velcro, plus the more decorative use of Velcro and Mylar. Meanwhile, Kilian Kerner, a self-trained designer connected to the indie music scene, offered tailored bike-shorts for guys and dressed-up looks for gals.

And what of Germany’s established, tried-and-true labels? Commercial and fashion favorites like Schumacher and Strenesse Blue continued to provide attractive, wearable duds and megabuck shows with brilliant production values brought a welcome whiff of the big time to Berlin. But there seems to be a sea change in the market, and both Boss Orange’s VIP-studded relaunch in a massive factory hall in Berlin’s outer reaches (see sidebar, below) and Michalsky’s brilliantly staged Friedrichstadtpalast fling for an audience of 1,800 nonetheless left viewers hungry for more merch and less merchandising.

Still, the pomp paid off for Escada, which staged a spectacular, rose-colored retrospective in Berlin’s magnificent Bode Museum. Pink carpets, masses of pink lilies, nonstop pink Champagne, pink light and even pink-striped clouds (courtesy of Mother Nature) set the tone, and the 50 mannequins dressed in a rainbow of Escada looks from 1978 to 2009 easily held their own amidst the neo-Baroque grandeur of the interior.

Could the economically pressed Escada afford it? “May I answer that with a simple yes or no?” quipped Escada chief Bruno Sälzer in response. “But more seriously, I have to separate financial issues and fashion statement. It’s more important than ever to motivate our customers and create a buzz. If you forget the financial situation, it’s a fantastic time to do that.”