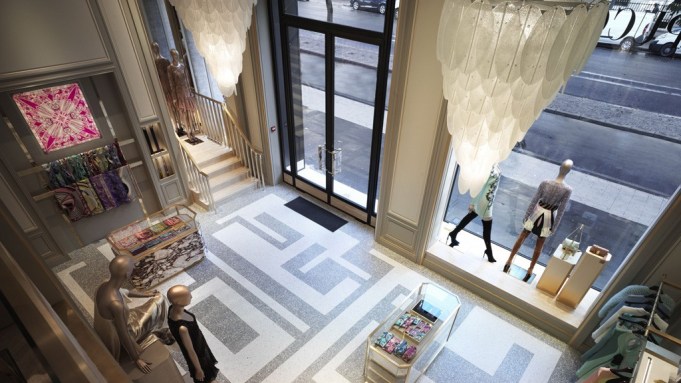 MILAN — Emilio Pucci will fete the opening of its new Avenue Montaigne boutique on Saturday with a cocktail reception, followed by a dinner and a party at Monsieur Bleu in Paris.

“Historically, Paris is one of our biggest markets, together with the U.S., and this boutique is symbolic for us,” said Alessandra Carra, president and chief executive officer, during an interview at the Pucci showroom in Milan. The new, two-floor Paris store, at 1,296 square feet, replaces a smaller unit on the same street, and was designed by creative director Peter Dundas and architect Joseph Dirand, who incidentally also designed Monsieur Bleu.

Carra praised the luxurious materials of the boutique and the added visibility obtained by its double-height windows. “We want customers to enter and feel like they are in Palazzo Pucci,” said the executive, referring to the family’s 15th-century building in Florence. Standout elements include terrazzo marble; a replica of Pucci’s 1966 print called “Torre” [tower] on the floors in clear gray and off-white; a purple-veined Breccia dei Medici marble found in Sicily; Forties Murano chandeliers; brass fixtures, and gold leaf embellishments. Colors range from dusty gray to powder lilac on the silk velvet sofa in the cocktail and evening section. “We see this as a club, not an apartment, where women can slow down and shop. We wanted to make it new and contemporary without being unfaithful to our history. Continuity is a strength, not a weakness,” said Carra.

Laudomia Pucci, vice president and image director, noted that this “even higher luxury positioning and top service is what the market demands, more than ever. We cater to luxury nomads who shop around the world and who know everything about the brand, so we must be very integrated.”

While modeled after the blueprint first seen in New York in November and subsequently in Rome, the Paris unit has the first shoe salon. Carra also believes in the potential of Pucci’s foulards, which will be prominently displayed. “We have a huge archive we can draw inspiration from — it’s a wonderful secret,” she said with a smile. A limited-edition silk scarf was designed for the opening of the boutique, inspired by a Fifties archival pattern. “The plan is to create a different foulard for every new store,” explained the executive.

Carra declined to provide sales projections regarding the store, but said that this was “an important investment and we expect excellent results.” She said that when she joined the LVMH Moët Hennessy Louis Vuitton-controlled brand three years ago, it was already well positioned globally. “Emilio Pucci was a pioneer — he won the Neiman Marcus Award in the Sixties and the U.S. continues to love the brand, and he was in Japan since right after the war,” noted Carra.

Pucci has experienced “continuous growth” and Carra expects gains in 2014, too, but declined to provide company revenues.

The company’s main markets are the U.S., which accounts for 25 percent of sales, followed by Japan, representing 20 percent, and Asia accounting for 15 percent of sales. The rest is made up by Europe, Eastern Europe, and other countries such as Brazil and the Middle East. Italy accounts for 15 to 20 percent of this. Despite Italy’s lackluster economy, Pucci is “actively looking” at a new location in Milan, said Carra.

The company is expanding globally and recent market openings include India. Developing China is high on the agenda, as there is only one store in Shanghai. Another unit in that city and two in Beijing are expected to open by mid-2014. “We are working on creating a stronger brand awareness, but we know that Chinese who shop in Hong Kong love Pucci’s colors and prints, the label’s joie de vivre and happy lifestyle,” said Carra.

The firm also values its wholesale business, which includes around 320 to 350 clients worldwide. Wholesale revenues, including franchised units, account for 50 percent of sales. “We want to maintain it this way, [independent retailers] are fundamental, I listen to them, it’s an important point of view,” she said, noting that they are key for a company whose business is mainly built on apparel.

Ready-to-wear accounts for 70 to 75 percent of sales and will remain the brand’s core business. Pucci will launch a new capsule resort collection for winter 2014. “The brand was born in the mountains,” said Carra, referring to Emilio Pucci’s original ski pants, “but now it will be a total look.”

While Pucci eyewear is produced by Marchon, the company is “studying” potential extensions such as perfumes and makeup, as well as special home design and furniture, said the executive. “The brand has lifestyle integrity and credibility,” said Carra. Laudomia Pucci praised this strategy, saying that the brand has “always been a comprehensive universe, an all-encompassing label, and it’s the right moment to see other projects reemerge. Resort is totally part of the DNA of our brand.”

Pucci is entirely made in Italy, she underscored, with production centered in Bologna.