The Florentine house will invite various "creative voices" to interpret its legacy, starting with Christelle Kocher of Koché for fall 2020.

Emilio Pucci is to invite guest creatives to interpret its rich heritage, starting with Christelle Kocher, a French designer whose ready-to-wear label Koché is well-known for vibrant patchworks, prints and streetwise savvy.

Revealing the new strategy exclusively to WWD, the Italian brand said it would unveil a fall collection of rtw and accessories by Kocher on Feb. 20 during Milan Fashion Week.

The maison lauded her “couture know-how, streetwear attitude and youth culture energy” and forecast a “unique and joyful interpretation.”

Controlled by LVMH Moët Hennessy Louis Vuitton for the past 20 years, Emilio Pucci has experimented with a variety of permanent designers, including Julio Espada, Christian Lacroix, Matthew Williamson, Peter Dundas and MSGM’s Massimo Giorgetti. Since Giorgetti exited in 2017, an internal team has turned out collections as LVMH executives pondered the best way forward for the Florentine house.

Engaging serial collaborators rather than a full-time creative director is becoming a more common business model, pioneered by Ruffo Research in the late Nineties and adopted in recent years by larger brands such as Moncler and Tod’s.

Sidney Toledano, chairman and chief executive officer of LVMH Fashion Group, said the approach will inject more creativity, which is a passion for the French group and its leader Bernard Arnault.

“It has to be fresh, it has to be new,” Toledano said in an interview. “We give them some freedom and they give us their own vision.”

Pucci described its new strategy as opening “its fabulous archives to ‘creative voices,’ entrusting them to deliver innovative interpretations of Pucci’s heritage prints, lifestyle and collections.”

Asked if creative voices could imply people from far-flung cultural realms, Toledano said “it’s not impossible, but for the moment we are focusing on fashion designers.”

In fact, he hinted that Pucci could reel in some big names as many seem open to “doing a capsule,” rather than a more full-time engagement.

Founded in 1947 in Capri, Emilio Pucci is one of Italy’s storied jet-set brands of the Sixties, synonymous with kaleidoscopic prints on silk jersey, which the founder even applied to skiwear early in his career, pioneering a lifestyle approach to fashion. For Pucci’s spring 2020 collection, the design team included a jogging bra, leggings in a kaleidoscopic print with mesh inserts, Windbreakers and color-blocked sneakers. 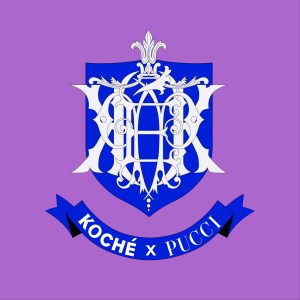 Kocher founded her Koché brand in 2014 and last November forged an alliance with Renzo Rosso’s OTB, whose production arm Staff International is to handle research and development, manufacturing and worldwide distribution of her collections starting with fall 2020.

She is also the artistic director of Maison Lemarié, a specialty atelier of flowers and feathers owned by Chanel through its subsidiary Paraffection. The Central Saint Martins graduate has an impressive CV, with stints at Emporio Armani, Martine Sitbon, Chloé, Sonia Rykiel, Dries Van Noten and Bottega Veneta.

Koché is known for its vibrant, guerrilla-style fashion shows, mostly held in public places around Paris and featuring models cast from the street. For its resort 2019 show, the label took over the deck of the Danielle Casanova, a passenger ferry freshly returned from Tunisia to the port of Marseille, in the South of France.

Koche was already on the radar of LVMH executives, as she was on the short list for the 2015 edition of the LVMH Prize for Young Fashion Designers. She won the 2019 edition of the ANDAM fashion awards, and sat at a table with Toledano, where the two forged a strong rapport.

“I like her creativity, her personality, her attitude,” the executive enthused.

For her part, Kocher lauded Pucci’s “magnificent” heritage, adding, “I have always been impressed by its elegant silhouettes, striking prints and colors.”

There are 24 Emilio Pucci boutiques in the world, 15 of which are directly operated and the balance a mix of franchises and shops-in-shop. The brand also counts 180 wholesale doors worldwide, and its product universe includes beachwear, junior collections, homewares and accessories such as scarves, sneakers and eyewear.

Toledano noted that Pucci had reduced its wholesale network in recent years, but it could expand anew in the channel with its more freewheeling and varied creative formula.
Emilio Pucci
load comments
blog comments powered by Disqus