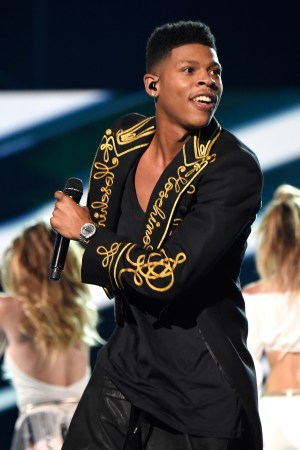 Judith Leiber gave her a crystal-encrusted mirror compact that looks like a chocolate chip cookie. Moschino let her stand out among orange-suited prisoners in a gold-trimmed denim patchwork jacket. Baja East sent a $5,995 full-length ikat-printed shearling coat that cofounder Scott Studenberg described as “her f–k you look.”

The woman basking in all this attention is none other than Cookie Lyon, who, as portrayed by Taraji P. Henson in “Empire,” has layered sassy one-liners on top of flamboyant style to become the TV character of the moment. When the second season of Fox’s hit series premieres on Sept. 23, Cookie can be seen reveling in a wardrobe stocked with the latest looks from Fendi, Kimberly McDonald, Stuart Weitzman, The Blonds, Versace, Balmain and other luxury labels that are clamoring to be featured on the show.

Indeed, Jana Matheson, creative director of Judith Leiber, predicted that “it’s going to have an effect that’s the same as, if not greater than, ‘Sex and the City.’”

It has always been the intention of “Empire” producers to highlight fashion. “The fashion on ‘Empire’ is bombastic,” said Lee Daniels, the Oscar-nominated director who created the show with writer Danny Strong for Fox, in a preview of the second season. “It is a statement in itself. It is as important as the acting.”

Fashion executives don’t need much convincing. “We like to work with films and television shows that treat fashion like a main character in their storytelling,” said Susan Duffy, chief marketing officer for Stuart Weitzman.

“Empire” follows the precedents set by “Mad Men,” “Dynasty” and “Bonnie and Clyde,” which all set trends. Adding to its credibility is its costume designer, Paolo Nieddu, who previously worked on the TV series “Ugly Betty” and the movie adaptation of “Sex and the City.”

“That show is going to provide inspiration to the more-is-more aesthetic,” said Valerie Steele, director and chief curator of The Museum at the Fashion Institute of Technology. “The clothes are edgy and they’re of such extremes. There’s definitely an audience for clothes inspired by that look.”

With the good comes the bad: in this case, lawsuits. To date, five cases have targeted the show’s producers, Rupert Murdoch and 20th Century Fox Television, alleging claims ranging from trademark infringement to stealing someone’s life story for the plot. One, filed by Damon Dash, was settled, whereas another demands $500 million in damages. Fox had no comment.

The appeal of “Empire” transcends the courts into social media. The finale generated 2.4 million tweets, earning the distinction of the most-tweeted episode in the past four years, per Nielsen Social, which tracks TV-related chatter on the social media platform. Plus, one Instagram snapshot of Bryshere Y. Gray, who plays Hakeem Lyon, in turquoise boxer briefs from Single Underwear generated more than 121,000 likes and 3,400-plus comments, many of which contained heart emojis.

Ever since Glassing started posting images on its Instagram page of Gray sporting its sunglasses, the Italian company has been attracting 1,000 new followers daily. Prior to that, “we’re not popular in the U.S. at all,” said Ilaria Campanale, Glassing’s marketing manager. One image of Gray in the brand’s GP1 style spurred Collin Courter to quickly jot a message, sans proper punctuation, to Glassing: “Hey I live in America and am interested in your sunglasses how do I buy?”

Courter, who hails from Olympia, Wash., and attends college in Los Angeles, didn’t shell out the 150 euros, or $170 at current exchange, for the frameless nylon lenses that evoke a futuristic eye mask. Still, the blond, blue-eyed boy-next-door regularly cribs style notes from Gray’s character, who is the youngest, brashest and his favorite on the show. He’d even check out an “Empire” fashion line, if the show’s creators were to go down that path.

“The fashion is sweet,” Courter said. “Every episode, Hakeem looks superfresh and gives me a lot of ideas for my own fashion.” In particular, he said, “all the different types of shirts he wears, too, not only look nice but also cool at the same time. Whether it’s button-ups or normal Ts, he has it all. I have definitely got a lot of T-shirts inspired by him. His shoes are definitely the best though, except they are all designer and $900-plus so I haven’t been able to cop any of those.”

In a testament to the coveted wardrobe from the debut season, Nieddu garnered an Emmy nomination for his costume designs on the first episode and Rita McGhee earned one for the eighth, which highlighted the Diddy-inspired White Party. While McGhee handled the rest of the first run after Nieddu finished the pilot, Nieddu returned to oversee costumes for the sophomore season.

McGhee didn’t have it easy. With a budget capped at $20,000, she dressed more than 10 characters, each of whom had more than five clothing changes. Because filming for the first season wrapped just when the series started airing, designers weren’t familiar with the show. “They didn’t want to give out any clothes,” McGhee recounted. The exception was guest star Naomi Campbell, who “brought in her own clothes because she’s Naomi Campbell,” she said.

Instead, on behalf of Henson, McGhee borrowed fluffy fur coats from Janet Bailey, who kept the cover-ups from her marriage to Earth, Wind & Fire’s lead singer. A flowing lime green Roberto Cavalli gown and other glamorous get-ups came courtesy of Monique Mosley, who is married to the show’s music producer, Timbaland. For the other clothing, which is documented on Fox’s Web site under Cookie’s Closet, McGhee said, “we went to the high-end stores, but we went on the sales rack.”

Many designers opened their doors once they turned into “Empire” groupies. Moschino creative director Jeremy Scott recalled how he met Gray — who goes by the rap name Yazz — through pop stars Ariana Grande and Justin Bieber. “Yazzy was like, ‘Oh, man, I love what you do. I’m a huge fan!’ And I was like, ‘Well, I’m a fan of you and the show,’” he said. And that’s how Scott outfitted Gray in not one, but two, attention-grabbing jackets for the Teen Choice Awards. After mugging for cameras in a zebra-print tuxedo jacket on the red carpet, the actor changed into a black and gold embroidered coat with tails to rap on stage. Scott also delivered a biker jacket and matching pants cut out of red leather slung with gold chains for Henson to wear on “Empire.”

“Anytime I love something or someone so much, I want to share my creativity with them and this is the case here,” Scott said. “I love watching the show. I find the cast to be so talented.”

On the other hand, Saint Laurent declined to lend handbags and shoes. “It’s not like everybody says yes all the time,” Nieddu said. Saint Laurent didn’t respond to a request for comment.

Jason Griffin, the L.A.-based stylist who works with Gray, said, “I had people offer me big amounts of money to get him into stuff.”

Serayah McNeill got enough of a boost from the show to join Taylor Swift’s squad in the music video for “Bad Blood” and land on the cover of Asos magazine, which has a print and digital circulation of 650,000. The actress who plays Hakeem’s paramour, Tiana Brown, traded in her Bebe basics from the first season for a Sea New York jumpsuit, Louis Vuitton shoes and Kanye West’s designs for Adidas in the second. She also lined up a forthcoming beauty spread in Vogue. “Everything I’m doing for the first time — and it’s so epic,” McNeill said.

Working as the lead hair and makeup artist on “Empire” helped Karen Lynn Accattato score a gig with Dove Men+Care. Fans have bombarded her with queries about the cosmetics she uses on Grace Gealey’s character Anika Calhoun, particularly MAC’s Ruby Woo lipstick and Kryolan’s Catwalk lip gloss. “When we walk into stores like MAC or any of our vendors, people freak out,” Accattato said.

About 50 women contacted Galina Sobolev the day after they saw Henson slink around in a red animal-print silk chiffon dress from Single’s archives on the show. First sold seven years ago for $387, the dress stirred so much interest that Sobolev revived it this fall in a limited run of 80. Although she should hike the price to $500 to cover inflating costs, the Los Angeles-based designer kept the original price tag so that customers could aspire to own a piece of Cookie’s life.

Cindy Schultz ordered Single’s dress in 2008 when she was a buyer for Nordstrom and bought it again this year for Emporium DNA’s stores in Washington, Las Vegas and New Haven, Conn. “Power shows such as ‘Empire’ and ‘Scandal’ cause our customer to ask how they can create those looks and where they can get the looks they see on these shows,” she said.

More Cookie clones are on the way. After creating the chocolate chip cookie compact and a personalized purse and lipstick mirror for the character, Judith Leiber is introducing a holiday collection that allows customers to write their names in cursive on crystal-covered clutches — just like Cookie’s — at Neiman Marcus for a starting price of $3,495.

“It’s very much part of the brand DNA, which dates back to Ms. Leiber, who made a lot of bespoke pieces,” Matheson said. “Society girls were an important part of her business.”

Cookie, the drug-dealing, felon-turned-hip-hop muse, as a society girl? As Single’s Sobolev put it, “Her background might not be impeccable but overall it’s a Cinderella story.”