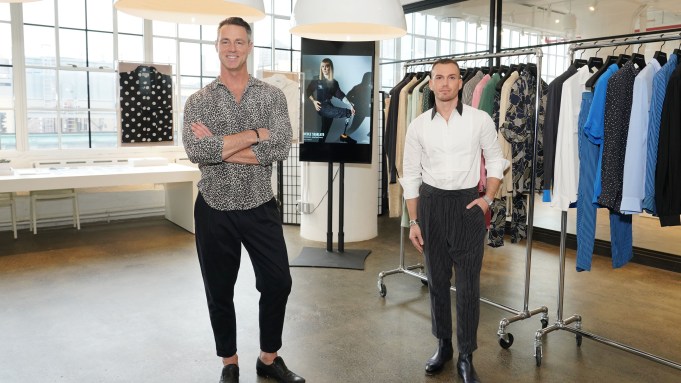 Rob Garrett Smith is tall, effusive and demonstrative. James Miller is poised, measured, English and not as tall.

The former is founder and chief executive officer of gender-free retailer The Phluid Project, and the latter is The Collected Group’s ceo and chief creative officer.

Smith in November told WWD that The Phluid Project was launching a job portal to help the LGBTQ community find employment in safe environments. Phluid would train and certify employment partners before listing their jobs on the Get Phluid portal as well as assist job candidates with résumé writing, job interview prep and professional dressing. Collaborating with brands on suitable attire that would work for Phluid’s long-neglected constituency, was also Smith’s goal.

Smith and Miller met each other through kismet and elevator music.

“When I moved into a building in 2017,” Miller said, “I met Rob, who is a captivating chap. There were these elevated conversations about what Rob was up to. I was super-interested in Rob’s journey. You’ve got someone who was almost going backward in this ideology and what Phluid represents. I kind of watched Rob’s mind ticking, and thought, ‘At the right time, maybe there’s something I can build or think of. But I never would have done that without knowing that The Collected Group had the right people to entrust in creating and moving the conversation forward with Rob.”

In May, Miller said he was sitting in a meeting at The Collected Group’s offices at the Starrett-Lehigh building in Manhattan’s Chelsea. “I thought to myself, “OK, this is it; we have a brand here and a team that feels like it would do justice to Rob’s project. Partly, it was us having the right people in place and having Equipment in place — the DNA of the brand is completely rooted in androgyny and ultimately, timeless. It’s Equipment’s 44th anniversary this year, and for me personally, I always have more questions than answers.”

Equipment is one of three brands under The Collected Group’s umbrella. The others are Joie and Current/Elliott. Equipment was founded in Paris in 1976 and relaunched in 2010. “Ultimately, it’s timeless, and was largely a shirt collection, but I didn’t feel what we were doing was true to its DNA,” Miller said. “I wondered what a gender-neutral category, or expansion line could look like, but honestly, I generally didn’t think we were worthy of the opportunity.

“Rob came in here and we talked about how other brands were already in the conversation and what they were doing,” Miller said. “We knew we would have to be true with the authenticity of the message to the community and true to the DNA of the brand.”

The latter was less difficult than Miller might imagined. “Even if I go back to the collection of Seventies and Eighties archives, they were almost genderless. I couldn’t tell who they were designed for, which is why people of a nonbinary culture could have felt comfortable in our clothing.”

Smith said Phluid Project has collaborated with commercial brands “that felt more youthful and young and active-inspired, but we hadn’t considered going into a space that’s a more contemporary and European heritage. Listening to James talk about the history of the brand, it started to make a lot of sense. It felt like we wouldn’t have to push that hard uphill, like it was there already, it just hadn’t been positioned that way. We saw the natural adjacencies between Phluid and Equipment and started to think about what that would look like.

Equipment will be the first brand to be certified by Get Phluid. “We’re looking at dress-code policies, pronoun usage. James and the team have listened and will evolve the collection to be more expressive and inclusive.” The Collected Group was quietly taken over by KKR, which makes the collaboration all the more remarkable.

The Equipment x The Phluid Project collection for spring 2020, which was shown in Paris last fall, features an ad campaign with models from the community. Phluid was involved on both sides of the camera, including selecting the models and working with the photographer, videographer and hair and makeup artists. “It was the understanding of gender pronouns and it worked out to be seamless and it was an incredible experience. It was curating it from beginning to end,” Smith said.

“The stories were so powerful and moving,” Miller said. “The product is really the canvas, and nothing else really matters. It could be any product if it wasn’t for the story that’s evolving. Jocelyn, a transgender model, is an incredible character. In post production there was a question of should we Photoshop the scars on her arm. There are cuttings from a suicide attempt. Someone said what are you looking for in a model, and I said, ‘We’re not looking for anything, we’re listening to see what are the stories.’ How do we evolve this so we’re not talking about models and looks, but we’re talking about the journey on somebody’s arm.

“As painful and expressive as some of the journeys have been, every ambassador has an optimistic view of what their journey has been,” Miller added. “The idea is one of, dare I say, empowerment, where any one of any age in any community could look at this and say, ‘You know what, there is hope and there’s a light at the end of the tunnel.”