Having adapted to a new life on the West Coast with her husband and infant son, Erin Fetherston goes for a relaxed but polished feel in her first-ever furniture and home decor collection. 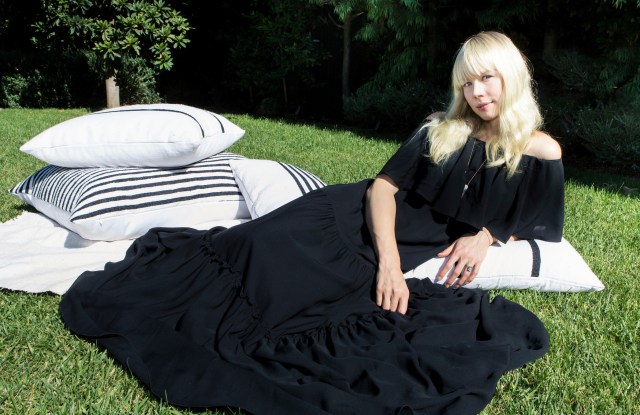 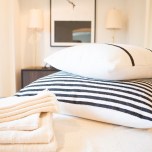 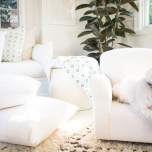 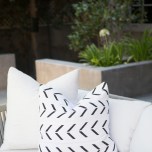 Erin Fetherston, walking through her living room warmly lit by the afternoon sun in Los Angeles, pauses a second to expound on the direction of her latest design project.

“It’s playing with white and something neutral but isn’t precious,” she said. Her choice of the last two words is telling, as she is easily recognized for her doll-like face and big blue eyes framed by straight blonde bangs as much as for her feminine dresses that can be described as precious. “It has a casual elegance to it but also a year-round feeling,” she continued. “It’s great for summer but I can also imagine styling it for holiday.”

Instead of a flirty frock accentuated with ruffles, the designer is referring to a rectangular mud-cloth ottoman, which doubles as a plush coffee table, and some plump pillows, which are printed with black and white geometric shapes. Fetherston is enjoying her new life in L.A. so much that she’s creating her first-ever furniture and home decor collection with Fragments Identity to allow others to partake in the domestic bliss.

“As a fashion designer, I’m influenced by my environment and surroundings,” she said. She’s also under pressure to ship 12 collections a year to retailers such as Neiman Marcus, Nordstrom, Lord & Taylor and various boutiques. Thus, she said, “with the fast cadence of fashion, there’s something appealing about interiors. It feels more lasting.”

While new to Los Angeles, Fetherston is a native when it comes to the laid-back California lifestyle. She grew up in Oakland, Calif., and pursued interdisciplinary course work that emphasized fashion, at the University of California, Berkeley. After graduating from college, she spent more than a decade away from the West Coast, first studying design in Paris, opening a small atelier in her French apartment, and then building her namesake fashion company in New York. She still maintains her business operations in Manhattan and presents her latest collections during New York Fashion Week.

With her husband, former Cobra Starship singer Gabe Saporta, and their five-month-old son, Fetherston is back in the Golden State. In contrast to her Parisian apartment, which she decorated with French antiques and Pop Art, and her Tribeca pad, which resembled a chateau transplanted to a loft, she now lives in a Paul Williams-designed home, complete with a pool, not too far from the Chateau Marmont, at the foot of the Hollywood Hills.

“I wanted something comfortable,” she said. “I didn’t go too pink. It shows a more mature, sophisticated point of view.”

A decision in February to commission Tammy Price, the founder and designer of Fragments Identity, to build furniture for her traditional five-bedroom house led to the 50-piece collection.

“Almost everything was custom and gave birth to this line,” Fetherston said. She particularly loves the mud cloth, which was loomed by hand in Africa out of cotton in a natural tint. In addition to the large ottoman, which retails for $1,895, Fetherston and Price offer, for $295, a smaller circular one whose top pops off to reveal a storage bin. There are also Shandong stools made from elmwood and natural French linen, dog beds sewn from garment-washed linen and blankets trimmed with fluffy pom-poms. For al fresco entertaining, a macramé-inspired hammock is woven loosely from cotton and nylon; it sells for less than $200. As a new mom, Fetherston also designed a $295 miniature rocking chair out of mud cloth and alderwood. Until her son is big enough to preside over it, her two little white dogs have monopolized the tiny seat.

Aware of some people’s hesitation with using a light-colored palette around pets and babies, Price said that “if they’re the right textiles, they launder well.”

Describing herself as “a very monochromatic designer,” Price started Fragments Identity in 1989. She has jointly designed projects with home-design showrooms and retailers but never with someone from the fashion industry. Everything is made in her factory in Westlake Village, Calif.

Fetherston and Price plan to begin selling the collaboration, called Erin Fetherston x Fragments Identity, on Fetherston’s Web site, through Domino’s media and e-commerce platform and at Consort Design in Los Angeles, in late August. Eventually, they want to expand with table linens, towels, bedding, outdoor furniture and gray hues that complement the black and cream base.

“I wanted to create something that never looked wrong. If someone is napping and you throw a pillow on the floor, it’s fine,” Fetherston said.

“That gives it the casual elegance,” Price added from the alcove in Fetherston’s house, reinforcing the perception that the two, both dressed in black and white, think on the same wavelength.

“It still looks like it was meant to be,” Fetherston responded.