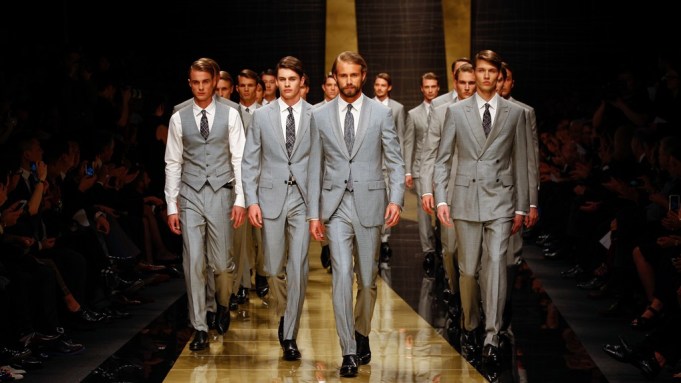 SYDNEY — Any relationship that lasts a half century deserves a gold celebration and that’s what Ermenegildo Zegna threw for the Australian wool industry this week.

Via a series of black velvet curtain reveals, the 58,000-square-foot Edwardian era show pavilion transformed from multimedia exhibition to runway show space to nightclub — where partygoers cheered on the Hundy family from Mudgee, New South Wales, winners of both Ermenegildo Zegna’s Wool Trophy 2013 and the Vellus Aureum Trophy 2013. The evening wrapped up with a set by Australian indie rock outfit The Temper Trap.

“Any excuse to come home is something I leap at — they’re few and far between at the moment, so it seemed like a fine event and obviously celebrating one of our most iconic industries,” said Hemsorth, who was wearing a three-piece pied-de-poule suit and tie and pochette featuring artwork from indigenous Australian artist Dorothy Napangardi, all from Zegna’s capsule Australian Celebration Collection.

Unveiled at the end of a runway show of the brand’s fall collection, the Australian Celebration Collection capsule range was available in the company’s four boutiques in Australia and New Zealand from Wednesday, as well as Zegna’s David Jones concessions — five months ahead of its global release.

At an estimated cost of 5 million to 7 million Australian dollars, or $5.1 million to $7.1 million, and partially subsidized by the wool industry’s marketing and research and development arm Australian Wool Innovation, the celebration was Zegna’s biggest global event to date, the company confirmed.

“I think it’s the first major event that a fashion brand is launching in Australia — it’s the right moment to be here and we do it before anybody else,” said Gildo Zegna, who described the company’s relationship with Australian wool growers as “very special.…It’s like we’re part of the family.”

The party was the culmination of three days of festivities.

International journalists and VIP customers were treated to Sydney Harbour cruises, a garden lunch at Peterson’s Winery in Armidale, NSW, in the New England farming region, which is located an hour by air from Sydney, following bus tours of seven of Zegna’s top wool suppliers.

It was all invaluable exposure for Australia’s superfine wool growers, whose highly labor-intensive 18.5 micron and under products account for 20 percent of the total Australian wool clip of 350 million kilos, or 770 million pounds.

According to a strategic review published last month by the Australian Superfine Wool Growers Association, however, most superfine wool enterprises have not been able to cover the costs of production for a decade and urgently need to move toward the production of finer and lighter wools and greater marketing efforts.

“We are in a space now where we’ve had an Eastern Market Indicator of above 1,000 cents for pretty much on three years — that’s the average of the Australian wool clip, with 20 microns being the average,” said Stuart McCullough, Australian Wool Innovation chief executive officer. “We don’t think that price is bad but we don’t think it’s brilliant either. But at the superfine area — 18-17-16 microns — those prices are appalling.”

“We say the superfine wool growers in Australia have become an endangered species,” said Darryl Carter from Whyworry Merino Park at Uralla, near Armidale, during a farm visit attended by WWD. “We need the Zegnas and the people at the top end of the market, they’re the only ones who see the quality.”

Over at the nearby Wilson’s Creek property, another wool grower, Tony Gall, demonstrated mustering, drenching, shearing and wool classing — in a wool shed so immaculately maintained not even the Galls’ Australian Kelpie sheepdog Boof was allowed inside, lest his hair contaminate the merchandise.

“We have got to be particular about things, because what we are producing here is a luxury product,” said Gall, while handling one 14.5 micron fleece.

“This is the sort of thing you make angel’s underwear out of — it’s probably come from a sheep that looks like Elle Macpherson,” he quipped, before adding, in superfine argot: “It’s bright, it’s stylish. It’s got bloom about it, not too much dust, no ‘vegetable fault’ [or plant contamination] and it handles. It’s beautifully soft. It’s true to type. It’s a strong possibility for the Zegna trophy.”

Zegna’s relationship with the Australian wool industry in fact dates much further back than 50 years.

The company first began sourcing wool locally in the Twenties. In 1963 in Tasmania, at a time when the industry was moving towards coarser fibres, Zegna launched a regional superfine wool award called the Ermenegildo Zegna Perpetual Trophy. The award became national in 1980 and the Vellus Aureum or “Golden Fleece” trophy for wool of 13.9 microns and finer was launched in 2002.

With over 50 percent of Zegna’s products using Australian superfine merino wool, the family has seriously considered “many times” investing in wool farms to ensure supply, according to Gildo Zegna.

Zegna plans to open at least two Australian stores by the end of the year. Australian sales rose 26 percent from 2011 to 2012, said Gildo Zegna, who added that the company is keenly aware of the growth of the Chinese tourist market in Australia.

“The local market is still I would say two thirds of the market, but that one third is growing very rapidly,” said Zegna.

Asked for his recipe for success, Hundy replied, “Selection, bloodline, nutrition — overfeeding will broaden the microns and you can’t underfeed or the wool will become tender — plus perseverance, a little bit of dedication and a lifetime ambition to grow the best wool.”

Not to underestimate, perhaps, one surprising ingredient — ginger and cinnamon biscuits, made by his wife Jill, that he gives to the family’s winning sheep.

He added, “You go out the back door and all you’ve got to say is ‘Come on’ and they start running.”