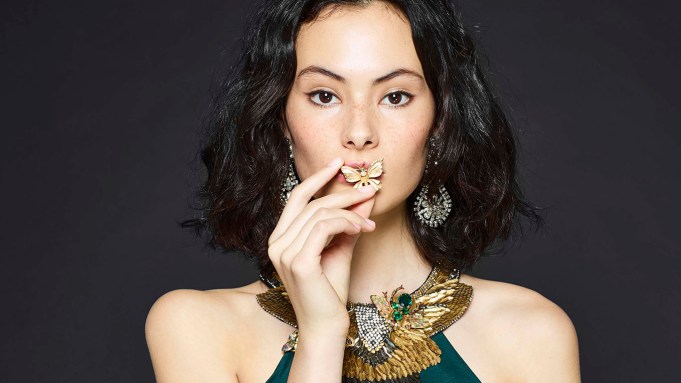 The collection is the result of a licensing agreement between Sevenarts Ltd., owners of the Erteé trademark and intellectual property rights and brand consultancy arm Airlift Ideas, headed by Shelley Rosen.

Halperin, who launched his line in 2015, traveled to St. Petersburg, Russia in summer 2016 and visited The Hermitage Museum, which at the time was hosting an exhibition about Erté. The city and the exhibition struck a chord in Halperin, who himself is of Eastern European descent.

“I have always been inspired by Erté and particularly by his drawings. Although they are two-dimensional, they have a lot of depth and movement in them. There is an effortlessness and femininity in his work that I feel matches my own,” said Halperin.

The late Roman Tyrtov, the artist who was known simply as Erté, is considered the father of Art Deco. He worked as a fashion designer for Paul Poiret before signing a contract with Harper’s Bazaar, where he designed covers for 20 years. He also worked for Vogue, Cosmopolitan, Ladies’ Home Journal, The Sketch and other magazines in the U.S., the U.K. and France. In addition, Erté designed sets for theater and opera, and costumes for opera, music halls and Broadway shows. He created costumes for the ballet “Mata Hari” and the Ballet Russe and designed furniture, jewelry, perfume bottles and accessories.

A dancer in his youth, Erté created fashion designs from the age of six until his death in Paris at the age of 97 in 1990. He was a firm believer in fashion as a means of elevating the body and using the adornment of form to project power and sensuality. He understood the movement of fabric and applied this to his designs.

The Erté x Kobi Halperin collection consists of 30 items, including woven blouses, sweaters, jackets, coats, dresses, skirts, hats and scarves. Blouses have fluted sleeves, there are cut-away shoulders, plush velvets, butterfly brooches and bejeweled necklines, along with intricate lace work and scalloped edged embroidery. The collection will retail for between $328 and $1,598 and will be available in 25 Neiman Marcus stores and neimanmarcus.com.

“There is lots of embellishment. There are antique brooches and an eclectic feeling. Every piece can be worn back to jeans. My woman celebrates getting dressed every day,” said Halperin. He said the collection, which will have separate labels and hang tags, will be housed with his ready-to-wear line at Neiman’s.

In recent years Erté’s work has been cited as the influence of two fashion lines by Gucci, part of an ad campaign for the Metropolitan Museum of Art and was the subject and inspiration for one of Saks Fifth Avenue’s 2014 holiday windows.