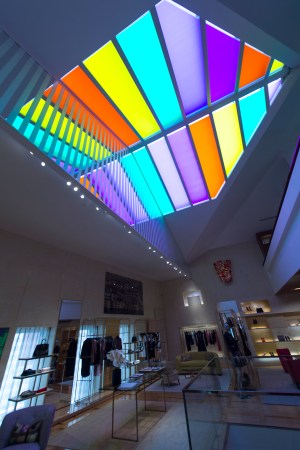 VENICE — Louis Vuitton is bringing a taste of Paris to Venice. Those who have not had the opportunity to see the striking Fondation Louis Vuitton building designed by Frank Gehry in the French capital will get a sense of it at the Espace Louis Vuitton in the Italian city.

An exhibition called “Fondation Louis Vuitton Building in Paris by Frank Gehry” was unveiled here Thursday to coincide with the opening of the Venice Architecture Biennale. An exhibition of  scale models  created by the Gehry Partners Studio that describe the creative and technical process leading to the shiplike structure of the Fondation is being presented at the Vuitton space here, displaying a comprehensive selection of works, sketches and models. In another link with the Fondation — which is showing Daniel Buren’s “Observatory of Light,” an installation of translucent colored gels and white stripes on the Paris building’s glass panels reminiscent of sails — the Venice Espace is displaying a work by the artist. Buren’s colorful and graphic work appears on the glass roof of the Louis Vuitton boutique, which houses the Espace. The latter has doubled its space to 2,160 square feet.

The exhibition also signals “a significant change as the Espace will now be run by the Fondation,” said Jean Paul Claverie, adviser to LVMH Moët Hennessy Louis Vuitton chairman and chief executive officer Bernard Arnault “It’s logical — the Fondation has its own collection, its own program and creates a place for the public to meet contemporary artists.”

Claverie said it has still not been decided whether the Buren installation will be permanent. “It depends on the appreciation of the public,” he said.

About the Espace, he said, “I hope it will get its own public of tourists, but also of the Venetians themselves.” Claverie added that the Espace is “valuable in itself but also in relation” with the Fondation in Paris.

Discussing the architectural models in the Venice exhibition, he observed that Gehry “worked for years to create the technique to realize the dream” he shared with Arnault.

Scientific adviser Sébastien Cherruet singled out the exhibition as unique of its kind since “it shows how Frank Gehry worked from the beginning to the end. Usually in similar circumstances, you see a few models but here, you see all the steps.” The exhibit runs Friday until Nov. 26.

The Fondation in Paris opened in October 2014,  while the Espace in Venice was inaugurated in June 2013 with the goal to promote contemporary art and the city’s artistic and historical patrimony.

The exhibit is site-specific but versions of it have traveled to Beijing and Tokyo as part of the “Beyond the Walls” project. Claverie underscored the importance of it traveling around the world. The Spazio Louis Vuitton Etoile in Rome will also present a program dedicated to the Fondation, in line with that now on display at the Venice Espace.

Espace Louis Vuitton will continue its collaboration with Fondazione Musei Civici di Venezia. Through this, Louis Vuitton each year supports the restoration of historical works key to Venice’s heritage. On the occasion of the exhibition, the company restored wooden models created for the construction of museums and villas in the city from the 18th century. Once restored, they will exhibited at the  Museo Correr in Venice.

Separately, Fondazione Prada will hold “Belligerent Eyes | 5K Confinement” from Friday until Sept. 11 at the Venice spaces of the foundation of Ca’ Corner della Regina. As Miuccia Prada told WWD in March, the goal with the experimental project is to “understand how many additional possibilities there are in the world of cinema,” addressing “contemporary image production.”

The first meeting open to the public as part of the project is called “Transmission Compound” and will be held on Friday.