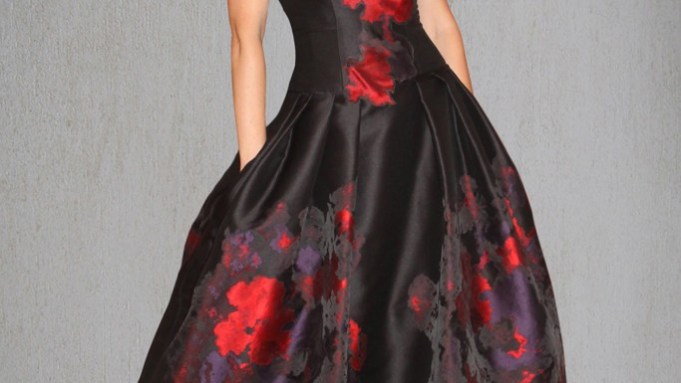 NEW YORK — The Designers show at the J.W. Marriott Essex House New York is small and targeted. Buyers represent high-end specialty stores such as the Lake Forest Shop in Lake Forest, Ill., Tootsies in Houston and Paul Simon in Charlotte. They shop for cocktail dresses and evening gowns and daywear and dresses for customers who like to lunch.

“We had 12 buyers in this room at the same time,” said Andrew Scott, who oversees sales at Tom and Linda Platt. “It’s been remarkable. Stores are leaving paper. It’s encouraging when they leave paper. This is the only trade show we do. On Monday, my last appointment was 8 p.m.”

Scott believes buyers and consumers are “starting to get more comfortable. It’s not 2009 anymore. Tom and Linda have weathered the storm. We have trunk shows booked through April. We do a huge trunk show business, including at Saks Fifth Avenue.” The Platts, whose dresses retail for $995 to $1,695, tested two pop-up stores in Florida and Kentucky in the past year. “The investment of doing a runway show is significant,” Scott said. “I don’t see that happening in the near future. But I would love a boutique.”

Michael De Paulo said he might show during fashion week in February. Last year, he did a presentation on the roof of the Empire Hotel here.

De Paulo has participated in Designers for the past five years. “You get the high-end stores,” he said. “They know what they’re coming for. In a word, luxury.”

With a background in architecture, De Paulo’s work has a sculptural quality. “I do a lot of pleating,” he said. “The market is calling for a very modern, sexy woman.” DePaulo designed a peach cocktail dress with a magnolia print. The same print — enlarged many times — appeared on a gown. His collection is available by special order at Saks Fifth Avenue and retails for $1,500 to $5,000.

DePaulo in February is launching a bridal collection with the same aesthetic as his main brand. “I work with a lot of socialites and opera and ballet clients,” he said.

Deborah Wenning, sales representative of Avolio, a collection handmade in Milan, described the brand as “haute basics and timeless pieces. We do a lot of made to measure,” she said. “It’s quality and craftsmanship.”

Designer Francesco Fino uses the technique of double knitting to create the substantial sweaters, jackets and dresses. Double knitting is when two fabrics are knitted simultaneously on one pair of needles.

Chavez, who manufactures her collection in Los Angeles, has been designing her own line for 15 years. Prices range from $800 for pants to $8,000 for gowns. Special pieces can be $10,000 and higher.

This is the second time Alex Teih has attended Designers. “It’s been very successful for us,” said Darrell Griffiths, Teih’s partner, who handles sales and merchandising. “I’ll walk away from the show with a substantial amount of paper.” Teih sells to stores such as Saks Jandel in Chevy Chase, Md., and Dimitra’s in Chicago for “unconventional” bridal, among other specialty stores. The company does 16 trunk shows a year. Teih’s dramatic designs include a long black dress with a full skirt and red and purple flowers that retails for $4,000, and a black flocked tulle dress, $4,300. “About half our business is special occasion,” Griffiths said. “Because we manufacture here in the city, we can do the tweaking.”