Europe’s biggest luxury players can see a wealth of expansion potential in the United States this year — and beyond. 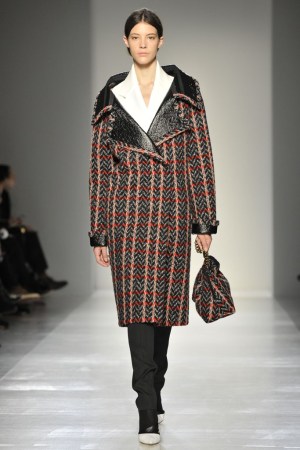 PARIS — By the dawn’s early light, Europe’s biggest luxury players can see a wealth of expansion potential in the United States in 2014 — and beyond.

This story first appeared in the March 4, 2014 issue of WWD. Subscribe Today.

“It’s not only that the American consumers are confident and buying more. On top of that, the U.S. is attracting more tourists, from Europe, Brazil, Russia, China. We strongly believe in the American market. This is why we decided to show the cruise in New York,” he said, also noting Dior would join the SoHo juggernaut and open a women’s boutique in the downtown Manhattan neighborhood this fall.

Dior is to parade Raf Simons’ next collection in Manhattan on May 7, the first of what is sure to be a slew of high-profile fashion events in America this year.

Later the same month, Hermès plans to stage its first fashion show in the U.S., flying in about 800 of its best customers from across the country for an event in New York that will exalt its universe of women’s products.

While in recent years, management attention at Europe’s big luxury firms has been fixated on China and its explosive growth — telegraphed by a flurry of fashion shows, store openings and exhibitions — a tempering of demand on the Mainland has shifted brands’ gaze back to more traditional markets, particularly America.

“The U.S. is a high-potential market,” said Robert Chavez, president and ceo of Hermès USA, noting the business in 2014 “continues to be very steady, very solid.”

He said a buoyant stock market, growing population, and new pockets of wealth emerging from high-tech industries augur well for the future, even as some analysts warn of moderated growth in luxury after several years of swift expansion.

“The potential is definitely there,” Chavez said, stressing that local clientele in cities including Boston, Seattle, Houston and Dallas are what drives the business. He predicted the U.S. could “definitely outperform the Asian market in terms of growth this year.”

“Even though the U.S. is the country with the biggest luxury market, we do believe it still has great potential,” agreed Jean-François Palus, group managing director of Kering, whose luxury brands include Gucci, Saint Laurent, Bottega Veneta and Boucheron. “In luxury personal goods, I think that the market still has a great potential that is untapped yet.”

Underpinning his confidence are “good fundamentals,” a positive perspective on the American economy, plus an ongoing “trending up of customers.…They are more and more sophisticated, more and more educated, less and less local oriented — so it all goes in a good direction.”

Palus said Kering’s luxury division is likely to add about a dozen directly operated doors this year, bringing its total U.S. complement to 200 boutiques and shops-in-shop. Among key events are the refurbishments and expansion of Gucci stores in Chicago and Beverly Hills.

Coming off a year of double-digit growth in the U.S. in 2013, Bottega Veneta is planning to open a maison — a boutique housing all of the brand’s products, including its furniture and home collection — in New York in 2016, according to ceo Marco Bizzarri.

“We’re quite confident. Generally speaking, given the maturity of the U.S. market; our outlook for luxury growth there is very positive. The high number of luxury consumers has really been a driving force in persuading us, over the past few years, to focus our attention even more so on the tailored retail experience we had been moving toward,” he told WWD. “The American market is very sophisticated so they have a real understanding of the craftsmanship behind our products.”

Versace also sees significant potential in the U.S. after experiencing rapid growth there since 2011. The U.S. market has shown the biggest growth for the company for the past three years, and like-for-like sales in 2013 were up 29 percent compared with the previous year, Gian Giacomo Ferraris, the company’s ceo, said last week as the fashion house revealed that Blackstone Group had taken a 20 percent stake.

Victoria Beckham, in Paris on Friday to christen a shop-in-shop at Printemps, reiterated that her strategic focus this year would be the U.S., having recently opened an office in New York and made some senior hires.

“It’s a big country. The potential is huge,” she enthused. “It is still the number-one luxury market. We don’t realize that because we always think it’s China or wherever else we think it is. It is the U.S.”

Upturning a recent trend in the past few years, luxury goods sales in the Americas grew faster than Mainland China in 2013, showing a 4 percent gain, compared with the latter’s 2.5 percent increase, according to a recent study by Bain & Co. and Fondazione Altagamma, the Italian luxury goods association

This partly reflects the increasing number of Chinese tourists visiting cities such as Las Vegas and Los Angeles. A number of stores that opened in secondary U.S. cities also helped drive the growth. In 2013, the Americas were expected to post luxury sales of 69 billion euros, or $95.2 billion.

Mario Ortelli, senior analyst at Bernstein Research, said America should remain “one of the key engines of growth” as its economy picks up steam and more people become wealthy. Branded jewelry and leather goods offer particular potential, he noted.

Luca Solca, luxury analyst at Exane BNP Paribas, cited “a strong wealth effect at play in 2013, on the back of rebounding real estate prices and a strong stock market. We calculate that domestic American demand for luxury provided an unprecedented contribution to global personal luxury growth.”

Among the more unusual trends that could encourage luxury consumption is the slimming of America, thanks to a greater focus on fitness and weight.

“The issue of overweight consumers has limited high-end fashion development in the past,” Solca said.

Ortelli noted that more American department stores are moving to a new business model, as brokers of retail space, giving brands a great ability operate their own leased departments and “put the right merchandise in place,” thus maximizing growth.

The popularity of online shopping could also have an important positive impact.

Noting that the Internet in some way influences almost half of luxury goods purchases, Ortelli said Americans are inclined to purchase goods they may have seen in a shop abroad.

In a recent research note, Solca wrote that, “e-commerce engagement can provide 1 to 2 percent extra like-for-like growth per year.” He estimates 5 percent of luxury goods were sold online last year, and online sales of luxury products should grow 30 percent annually.

It isn’t all clear sailing, though.

BNP’s expectations are more prudent on U.S. domestic demand growth in 2014, and Solca warns that European brands face “a formidable set of competitors in accessible luxury across all categories” — from leather, to jewelry, to fashion —and that spending is skewed towards this level of product.

“The challenge for European brands is to convince consumers they have good reasons to spend more,” Solca said.

In a report published last week, he pointed to Boston Consulting Group data touting U.S. consumers as the most important growth opportunity for the luxury industry in the next few years, mainly based on self-declarations.

“Industry insiders take a more cautious stance, and point to market-share gains as the way for luxury brands to grow in America,” Solca noted.