A furious game of musical chairs is currently under way and shows no signs of slowing down. 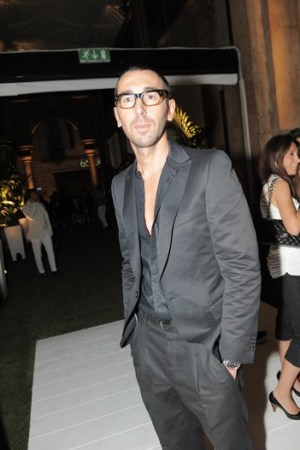 PARIS — The furious game of musical chairs currently under way in the design studios of Europe shows no signs of slowing down.

According to market sources, Chloé is to expected to reveal as early as today that Clare Waight Keller, most recently creative director at Pringle of Scotland, will succeed Hannah MacGibbon at the helm of the French firm.

Chloé would simply be the latest of a host of European brands expected to name new designers in the coming weeks and months, headlined by Christian Dior, which ousted its star couturier John Galliano last March amidst widening allegations of racial and anti-Semitic outbursts.

The High Court here is expected to announce Thursday a date when the designer is to stand trial on a charge of public insult.

Alexander McQueen’s Sarah Burton — thrust to international stardom for dressing England’s royal bride, Catherine Middleton — is said to be at the top of the list of potential candidates that luxury titan Bernard Arnault is coveting as Galliano’s eventual successor.

Meanwhile, the industry can anticipate new faces at a host of august names in the coming weeks and months.

Balmain has already said that Christophe Decarnin will be replaced by his number two, Olivier Rousteing, while Gianfranco Ferré, Cacharel, Azzaro, Kenzo and Trussardi are among brands said to be recruiting new creative leadership.

Meanwhile, Waight Keller’s successor at Pringle, former Balenciaga alum Alistair Carr, is already at work on the resort collection and will show his first men’s wear collection in Milan next month.

The flurry of change comes at a buoyant time for high-end fashion businesses, and after a long period of stability in design studios.

“The entire world is changing so deeply and so quickly in this moment. Perhaps some brands are feeling the absolute need to change their designer if he or she is no longer able to make consumers push the door of their boutiques,” mused Jean-Jacques Picart, an industry consultant here.

Tancrède de Lalun, merchandise manager for men’s and women’s wear at Printemps, said the revolving door scenario was a cyclical one and was amplified by the domino effect that every departure has on other houses.

“During the crisis, for two or three years, nobody moved,” he said. “Everyone was just ducking and waiting for the crisis to blow over by making as little noise as possible and hunkering down with their teams.”

The return of double-digit growth among many leading luxury brands has emboldened managers to give their labels a makeover, both in terms of strategy and creative talent, de Lalun said.

“The reason is that new sets of skills are being prioritized in an accelerated, fragmented fashion culture,” he explained. “In a social media-fueled landscape, a new breed of designer needs to operate more like commissioning editors, treating their brands as media channels that edit cultural themes, and manifest them as clothes. And while it seems new, interestingly it’s the same approach that drove Coco Chanel to success — an understanding that fashion wasn’t just clothes, it was about ideas and the culture that could be expressed as clothes.

According to Robert Burke, president and chief executive officer of Robert Burke Associates in New York, the current game of musical chairs is likely to end with brands eclipsing the designers that eventually fill the empty seats.

“The last thing the brand wants is instability,” he said. “I wouldn’t be surprised to see lower-profile [hires] as opposed to major star designers.”

Naming Christophe Lemaire to succeed Jean Paul Gaultier at Hermès and designer-creative director tandems like Sébastien Peigné and Nicola Formichetti at Mugler are other examples of the antifame trend, concurred Printemps’ de Lalun.

“The market is recovering; it’s bringing back the energy and people think business could be even better,” de Lalun said. “It’s positive in the sense that it injects energy and a fresh vision. Having said that, hopefully things will not change every couple of years, because when a house changes its designer every two years, it’s very destabilizing.”

Liberty’s managing director Ed Burstell agreed. “Generally speaking, the overall merry-go-round of designers is not great for the industry. For a retailer, it’s really difficult to stand behind a brand that has a potentially changing designer,” he said. “A retailer wins by building a loyal rapport with its clientele, and you do that with consistency. It’s really difficult to establish that rapport when the consistency is not there. Look at the best brands. Take Burberry, for example. It has a consistent vision over time. Or Chanel. A consistent vision over time.”

Chloé has certainly weathered turbulence in its design studio since the 2006 exit of Phoebe Philo.

Before installing MacGibbon, one of Philo’s deputies, Chloé experimented with a team approach and three unfruitful seasons under Swedish designer Paulo Melim Andersson.

Seen as a knitwear expert, Waight Keller claimed to have helped transform Pringle over her six-year tenure “from a Scottish knitwear company to an international luxury brand.”

Before Pringle, Waight Keller was a senior women’s designer at Gucci during the Tom Ford era. Before that, she was design director for Ralph Lauren’s Purple Label men’s line. Her first job was as a women’s wear designer for Calvin Klein.

Chloé officials could not be reached for comment at press time.

“Pure creativity is becoming equally important as the ability to manage creative talents at a global level,” she said. “In the past decade, we’ve seen designers become ‘creative directors.’ Now we are probably facing the need to have chief creative officers as creative partners of chief executive officers. This requires redesigning organizations.”