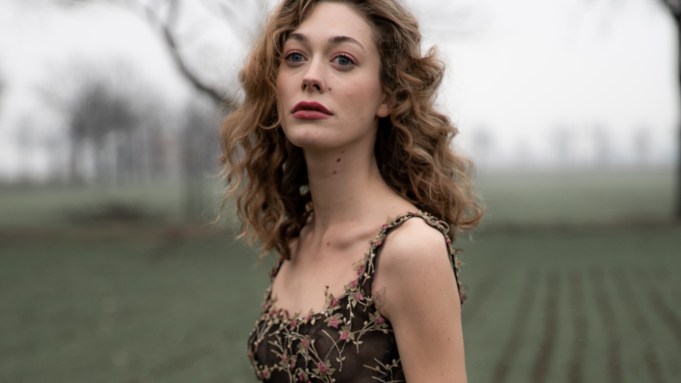 Forget about aftershow parties: Milan Fashion Week was a digital affair with little to no occasion for cocktail sipping, small talk and gourmet canapés.

Consumers have also become accustomed to partying remotely via Zoom, but hopefully there will be a time when dressing up to go to a club will be back, and Milan’s designers showed plenty of options for the occasion.

While former Gucci VIP designer Daniel Del Core went full-on couture — with silhouettes showing crystals, floral appliqués and organic-inspired draping — and Valentina Nervi for her Nervi brand took a similar, maximalist approach, others including Luisa Beccaria and Francesca Ruffini’s F.R.S. For Restless Sleepers embraced a more restrained approach with whimsical yet effortless creations for women who party, either at home or out and about.

For instance, Luisa Beccaria accessorized her fall lineup, from floral pants and sweaters to velvet dévoré nightgowns, with rain boots and introduced a lineup of second skin catsuits splashed with romantic floral motifs. But she didn’t shy away from her signature feminine and romantic frocks.

“The woman we portray each season is a romantic dreamer,” the designer explained over the phone in between virtual appointments with buyers. “The collection was inspired literally by the need for hugs, we don’t often think about it, but clothing hugs the body, it’s the one thing closer to it,” she offered.

A black tulle gown featured rose appliqués and was paired with a floral turtleneck, while an opulent velvet robe coat sported in look book images by Beccaria herself was inspired by loungewear from the ‘40s and ‘50s. There was a cozy whimsical vibe in the number of floor-length gowns paired with knit vests and decorated sweaters that made the lineup feel easy to approach but still luxurious.

Francesca Ruffini has always been a master of loungewear chic with her F.R.S. For Restless Sleepers creations. For fall, inspiration came from a variety of old iconographies. Board game illustrations appeared on velvet-trimmed pajama sets, worn with matching lingerie, while magical maps of the stars and planets were printed on quilted velvet shirt jackets, refined and cozy.

Franchi referenced an equestrian theme throughout her fall lineup but veered extremely feminine when parading her nude-look gowns, the designer’s signature embellished frocks, some flapper-style with cascading beads and sequins, others crafted from macramé lace and organza, the latter embellished with silver sequins arranged in a checkered pattern.

While throwing casual options into the mix, such as logoed tracksuits and Bermuda pants, Genny’s Cavazza Facchini zeroed in on exuberant styles.

“Looking at the global context, there definitely are consumers who are already experiencing a new normality, which will hopefully extend to other regions in one year’s time,” Facchini said. “Gradually we will all return to party and attend events and the desire to wear something special and elegant will gain steam.”

She paraded sparkling options covered in purple, ruby red and silver sequins, some short and girly, others flaring and floor length with lingerie-inspired lace bodices. Nodding to the feminine-masculine dichotomy seen also on the day looks, she reinterpreted tuxedos in shimmering jacquard fabrics with butterfly decorations.

Along the same lines up-and-coming brands on the Milan scene projected hope and energy, delivering eveningwear options full of sequins and ruffles, cut in voluminous silhouettes and imbued with a dash of flamboyancy.

A new name on the Milan schedule, Nervi offered couture gowns showed via sketches that in her video were superimposed on a Martian landscape for an unlikely but fun runway show.

Nervi’s models-turned-alien creatures were bold and daring, wearing a dramatic gown that featured a crystal encrusted heart-shaped bodice and pencil skirt with a giant bow; a high-slit sinuous dress with a hoodie in wet-look black silk was sexy, while a purple column frock framed the silhouettes via pleated ruffles around the neck and torso. Naming her dresses after celebrities, Nervi made a statement about who she is designing for: Gaga, Winnie, Indaya and Kim.

“Evening gowns are like poetry and I want to telegraph this message through my collections,” said Nervi. “I’m banking on the eveningwear category because I’m confident this is just a temporary situation, we will resume our lives and this is a testament to that, a sign of hope,” she noted, adding inspiration came from Old Hollywood style.

For her Annakiki brand, Chinese designer Anna Yang also stretched her muscles with couture constructions, often experimental, off-kilter and not always flattering, suitable more for a music performance on stage than for intimate cocktail parties. They included long dresses covered in ruffles and fake fur and a short option featuring a high-waisted crinoline skirt and heart-shaped bodice.