The collaboration will be revealed today at the brand's men's show in Milan.

MILAN — After working with the likes of Nico Vascellari, Reilly Hey and Sue Tilley, and in January with her mentor Karl Lagerfeld, Silvia Venturini Fendi will reveal today the latest Fendi guest designer: Luca Guadagnino. The “Call Me By Your Name” director has designed a special print for Fendi’s men’s spring 2020 collection to be unveiled here Monday in a new location for the brand, the neoclassic 18th-century Royal Villa.

A longtime friend of Venturini Fendi, Guadagnino first worked with the brand on a video for spring 2006. In 2007, they partnered to set up the First Sun production company, which produced the director’s acclaimed 2009 film “I Am Love,” starring Tilda Swinton.

Guadagnino, whose “Call Me By Your Name” received an Oscar nomination for Best Picture and one for Actor in a Leading Role for Timothée Chalamet’s interpretation, in 2012 founded the production company Frenesy Film specifically for taking on projects with major fashion brands, and he has directed or produced short films or commercials for, among others, and in addition to Fendi, Giorgio Armani, Ermenegildo Zegna, Salvatore Ferragamo, Sergio Rossi, Cartier and Pomellato, and, most recently, Valentino.

Fendi chairman and chief executive officer Serge Brunschwig revealed the collaboration during an interview at Fendi’s pop-up store dedicated to the brand’s men’s wear category. Located near Fendi’s established Via Montenapoleone boutique, the unit offers a worldwide preview of the new Baguette for men and the men’s fall 2019 collection designed by Venturini Fendi and inspired by Lagerfeld. As reported, for the first time, Lagerfeld designed a men’s look for Venturini Fendi, for that season, a jacket with an architectural shape. With an asymmetric neckline, it showed a shawl collar on one side and a classic lapel on the other — a dualism that informed the collection.

The pop-up will stand for three months in the 16th-century Palazzo Carcassola-Grandi, embellished with beautiful coffered ceilings.

Without providing financial details, Brunschwig said this was “an important moment for Fendi Man.”

The walls at the entrance are covered with a collage print of Lagerfeld’s handwritten notes, images and sketches. The references to the late designer are everywhere, from the white mock-book covers featuring excerpts of his letter to Venturini Fendi on the fall collection, placed on rows and rows of white shelves reminiscent of his own gargantuan library, to the rugs decorated with his curling Karligraphy FF logo monogram, designed in 1981, in two color versions. 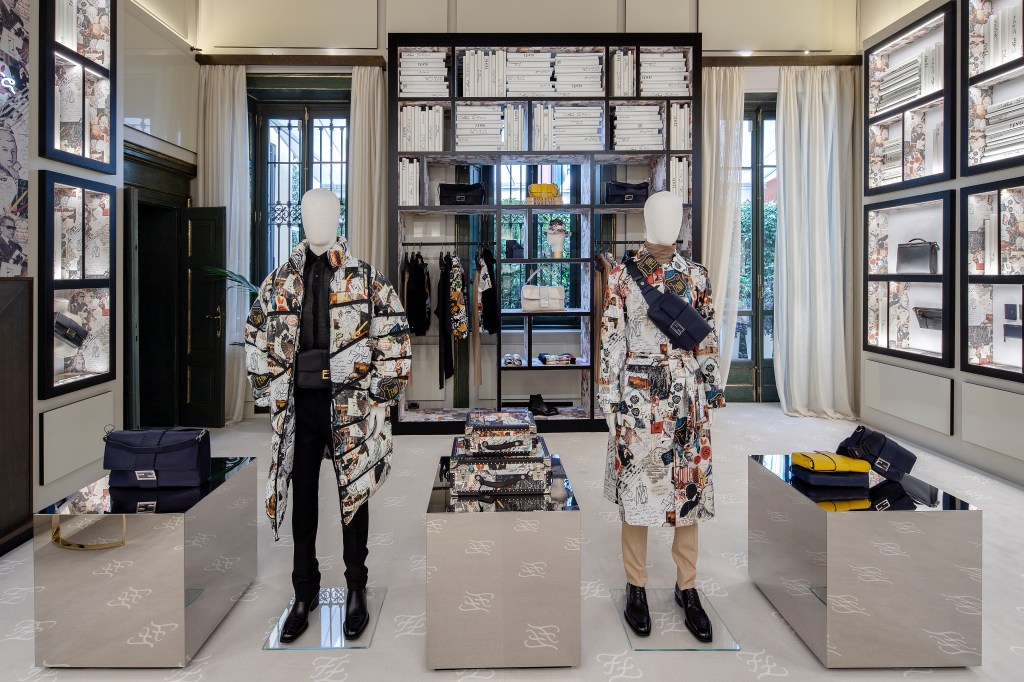 The store carries the entire product range, from leather goods and ready-to-wear to textiles and shoes. Brunschwig pointed to a new Peekaboo Essentially — “a briefcase in the shape of a Peekaboo,” he said, praising its versatility and usefulness.

All areas are furnished in the Fendi Casa Collection, and, in addition to a cozy lounge, the store has another asset — an outdoor area in the back near a garden under an awning, a haven in Milan’s summer heat.

The company has been investing in pop-ups, recently opening one at Selfridges. “We will do more, as well as pop-ins,” said the executive, citing the “Dream Room” dedicated to the Baguette, for example, a concept that could potentially be developed for the Peekaboo.