The first initiative born from the new partnership is the first native content project produced by Tencent for a luxury brand.

MILAN — Gucci and Tencent will reveal today that they have partnered “to establish a framework that will stimulate innovation and leadership in digital strategies spanning the Internet of Things, Artificial Intelligence, Data Science, Smart Retail, Content Generation and Digital Thought Leadership,” the companies said in a joint statement.

The initiative born from the new partnership is the first native content project produced by Tencent for a luxury brand.

This includes a four-part co-created short film series called “Gucci Inspiration Map.” The film pairs an international group of talents, who are friends of the house and close to creative director Alessandro Michele: Chinese actress and singer Chris Lee, ambassador for Gucci timepieces and jewelry in Asia; Fiammetta Terlizzi, communications and external relations of Biblioteca Angelica, the stunning 17th-century public library in Rome that holds around 180,000 manuscripts and 1,100 broadsides, and which is considered the oldest public library in Europe along with the Biblioteca Ambrosiana in Milan; Valentina La Rocca, co-owner, antiquarian and artistic director of Antica Libreria Cascianelli, a storied Roman bookshop dear to Michele; actor Wu Lei; Adrian Kozakiewicz, German insect breeder; Chinese actress Ni Ni, who in 2017 was named eyewear ambassador for Gucci in Asia, and Lady Laura Burlington, Countess of Burlington, the wife of William Burlington, heir to the Duke of Devonshire, and who worked on the “House Style: Five Centuries of Fashion at Chatsworth,” exhibition sponsored by Gucci in 2017. The list includes Lai Guanlin, Song Yanfei, Wang Yueyi, Yang Chaoyue and Zhou Zhennan, five Chinese Generation Z pop singers and actresses featured in the finale episode.

“The digital landscape is becoming increasingly complex with both existing and emerging technologies that provide significant opportunities for deeper, customized and personalized engagement with our brand community,” said Marco Bizzarri, president and chief executive officer of Gucci. “This joint business partnership is designed to create the conditions that allow us to fully capitalize on this potential together.” 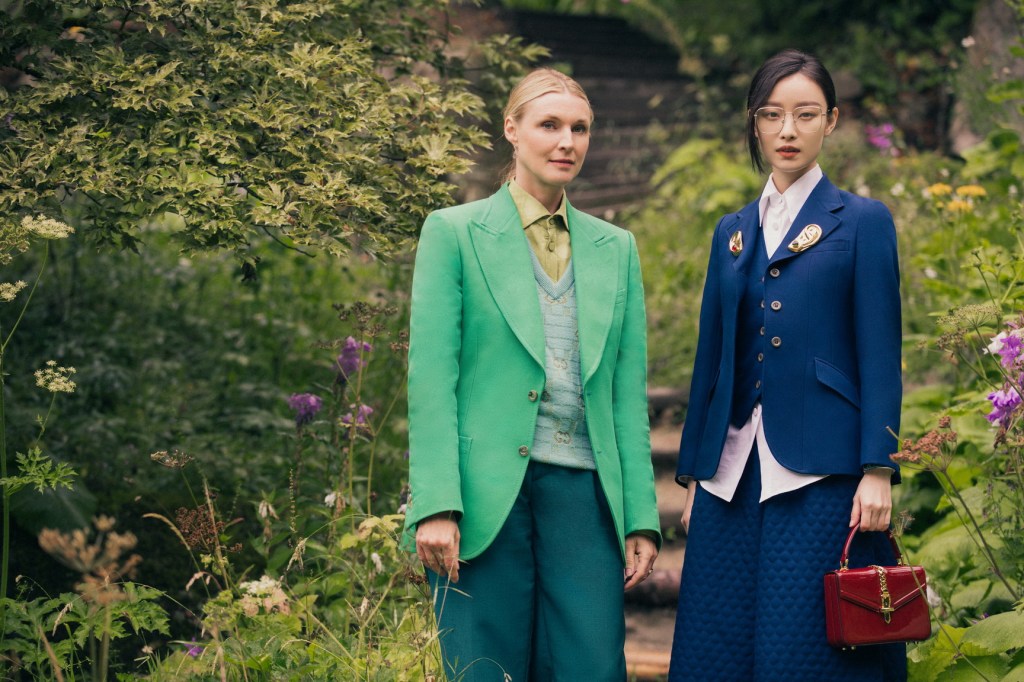 Tencent was founded in Shenzhen, China in 1998 by Pony Ma and a few friends and has been listed on the main of the Hong Kong Stock Exchange since June 2004.

“Tencent is committed to driving technological innovations to support the upgrading of industries and to create the best value for consumers,” said Martin Lau, president of Tencent. “Through this collaboration with Gucci, we will jointly build exceptional experiences for Gucci’s community, conveying Gucci’s fashion sensibility and contemporary aesthetics to Chinese consumers.”

Consumers know Tencent best as the creator of social network QQ and all-encompassing super app WeChat (or Weixin in the Chinese domestic version). Beyond social networks, it is a major player in music, e-commerce, mobile gaming, advertising and payment solutions. A shareholder in JD.com, the main rival to Alibaba’s Tmall, last year Tencent struck a $5.4 bilion deal with Dalian Wanda, one of China’s biggest property developers, to build out 1,000 malls across the country. As reported, Burberry has entered an exclusive partnership with Tencent to develop social retail in China, with plans to pioneer a concept that blends social media and retail, “creating digital and physical spaces for engaged communities to interact, share and shop.” The partnership will begin with Burberry opening a social retail store in Shenzhen in the first half of next year, powered by Tencent technology.

In November 2017, Tencent became the first Asian tech company to be valued at more than $500 billion, closing in on Facebook and Amazon.

The powerful Tencent ecosystem is said to have a global reach wider than Facebook, Instagram and Spotify combined. All of the digital native series content is also being leveraged on Gucci’s own platforms.

Gucci has been upping the ante on its social media platforms. For example, as reported, in September some 16 million viewers connected on Weibo to see the brand’s spring 2020 show, marking the first time the Italian label had live-streamed its show on the Chinese platform. Held in Milan on Sept. 22, the show for the first time was certified carbon neutral, organized according to the ISO 20121 international standard that defines the sustainability of an event by measuring its environmental, social and economic aspects.

According to Tribe Dynamics, the data firm best known for tracking earned media value, in August Gucci ranked first out of the top 10 fashion brands, recording more than $26.7 million in earned media value. This was a 2 percent increase over the previous month.