MILAN — Score another one for Paris.

The fizzy fashion capital will welcome a one-off showing by Gucci this fall, the latest in a string of gets for France, which is hosting the lion’s share of destination resort shows this year, including Dior’s today in Chantilly, Louis Vuitton’s on May 28 in Saint-Paul-de-Vence and Gucci’s on May 30 in Arles.

Decamping from Milan for one season, Gucci is to parade its spring 2019 collection in the French capital on Sept. 24. The show marks the crescendo of a three-part homage to France conceived by the Italian brand’s creative director, Alessandro Michele.

“Gucci is a global brand with deep and vibrant Italian roots and a visionary French shareholder, Kering,” said Marco Bizzarri, president and chief executive officer of Gucci. “When Alessandro told me of his desire to present the new collection in Paris — continuing the French-inspired narrative — I thought it was a perfect way to continue the creative homage to France.”

Bizzarri underscored that the show date marks the “transition day between Milan and Paris Fashion Weeks to avoid impacting schedules. We will then look forward to returning to Milan in February 2019.”

While foregoing a show in Milan for the season, the company is planning a special event to be held at the Gucci Hub on Wednesday, Sept. 19, the second day of Milan Women’s Fashion Week, scheduled to run Sept. 18 to 24. Details about the event are being kept under wraps.

Gucci began its ode to France starting with its pre-fall advertising campaign, which harks back to that country circa 1968, when student marches and riots sparked popular rebellions against military and bureaucratic elites. Photographed and directed by Glen Luchford, it depicts Gucci-clad rebels occupying a university campus, passionately challenging the establishment and asking for change. Luchford’s black-and-white photos are inspired by the bold French Nouvelle Vague imagery of the late Fifties and Sixties and by radical filmmakers François Truffaut and Jean-Luc Godard. For the campaign, Gucci launched the hashtag #GucciDansLesRues [Gucci in the streets]. The campaign was also launched on the Gucci Art Walls in Milan, New York, London and Hong Kong. 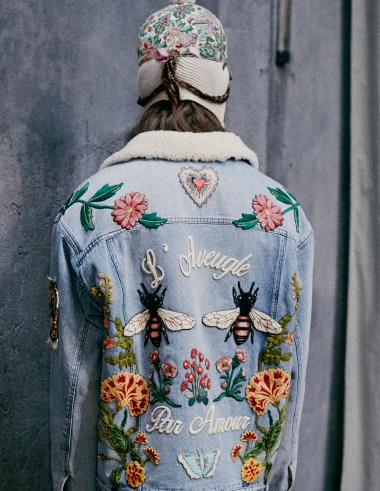 Meanwhile, the cruise show in Arles will exalt the ancient site of the Promenade Des Alyscamps, a Roman necropolis that has inspired everyone from Italian poet Dante Alighieri to Dutch painter Vincent van Gogh. “After cruising New York, London and Florence, France was the most natural and organic landing place for Gucci. I wanted to pay my homage to this incredibly important and fundamental country for our culture and history,” Michele told WWD earlier this month. “All the places I travel to for cruise also belong to my personal story. They are heartfelt places, which have a lot of meaning to me. Nothing is accidental.”

Carlo Capasa, president of the Italian Chamber of Fashion, said the association “understands and respects the reasons behind Gucci’s request” to hold the spring show in Paris “and will look forward to Gucci returning to open Milan Fashion Week next February.”

In recent years, the cruise season has been a springboard for European luxury houses to fan out to increasingly exotic locales, from Rio de Janeiro to Havana, Palm Springs, Dubai and Seoul. Gucci was the first to announce its intention to show in France.

Fashion weeks for couture and ready-to-wear in Paris, seen as the most prestigious and international platform, have attracted a number of marquee American names in recent years, including Thom Browne, Rodarte and Altuzarra.