MILAN — Alessandro Michele is not moving to Hollywood, but he’s clearly embraced cinematography.

Gucci’s creative director will present the new course of the brand through a seven-part film series he has codirected with Gus Van Sant.

Gucci’s upcoming collection will appear throughout seven episodes running from Nov. 16 to 22, screened during a new digital fashion and film festival called GucciFest. The collection and the series are dubbed “Ouverture of Something That Never Ended.”

In January 2019, during Milan Fashion Week, Gucci held an impactful performance by the androgynous Calderoni at the Gucci Hub instead of a men’s fashion show. The 90-minute “Motus MDLSX” play was a manifesto about gender fluidity and the journey in affirming one’s own identity, transcending labels imposed by society, mixing a monologue with a DJ and VJ set.

The seven episodes this month will be released daily through the course of the festival as an exclusive broadcast on YouTube Fashion, Weibo, Gucci YouTube, and embedded on the dedicated site GucciFest.com, gradually revealing the new collection day by day until Nov. 22. 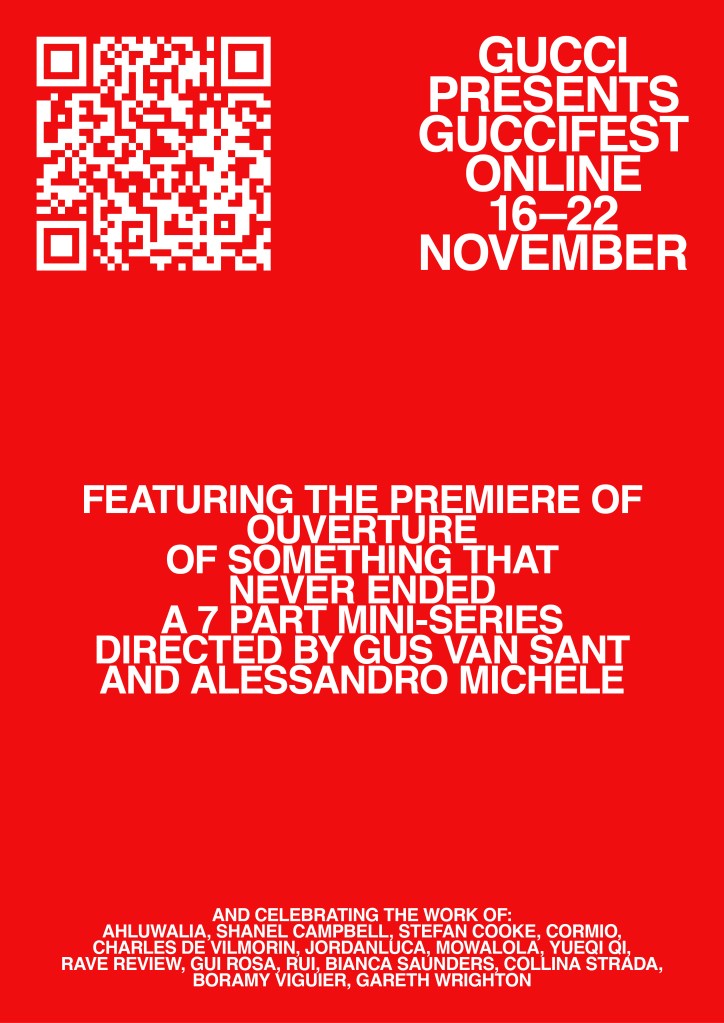 Last month the Italian fashion company teased the new collaboration with Van Sant by posting on Instagram drawings by him with a cryptic caption, “Impressions of Rome,” and the hashtag #GucciOuverture, as well as a Polaroid by Paige Powell of Van Sant and Michele.

Michele in May with his manifesto “Notes from the Silence” revealed he was crafting a new course for the brand, abandoning what he has called “the worn-out ritual of seasonalities and shows to regain a new cadence, closer to my expressive call. We will meet just twice a year, to share the chapters of a new story.”

Conceiving new names for the collections and inspired by the music world, Michele in July presented what would have traditionally been called a cruise collection and that was dubbed “Epilogue,” worn by the team from his office instead of models in a project that included a 12-hour livestream.

The collaboration with Van Sant is in sync with Michele’s own sensibility. The American film director, screenwriter, painter, photographer and musician is a champion of diversity and inclusion and has typically dealt with the issue of marginalization and in particular of homosexuality.

His feature-length directorial debut came with the film “Mala Noche” in 1985, followed by “Drugstore Cowboy” in 1989. For “Good Will Hunting” in 1997 and 2008’s “Milk,” based on the life of gay rights activist and politician Harvey Milk, Van Sant was nominated for the Academy Award for best director and both films received Best Picture nominations.