The 20-piece collection plays homage to iconic Hervé Léger, celebrating the female form with a modern twist, through the lens of creative director Christian Juul Nielsen and Julia Restoin Roitfeld.

To shake things up for the pre-fall season, Hervé Léger creative director Christian Juul Nielsen wanted to bring one of his muses into play, beyond collection moodboards, to design the brand’s first collaboration. Cue art director, designer and model Julia Restoin Roitfeld.

During initial conversations, the duo found their research and ideas for a future collaboration flowed seamlessly, solidifying the partnership just before the pandemic hit. Since the label tapped Juul Nielsen in 2018, he has designed into the clean, minimalist Nineties elan, often referencing supermodels of the era, while giving the label a modern update to its historical bandage looks; images of Cindy Crawford and Kate Moss, in body-hugging party attire, echoed this aesthetic throughout Restoin Roitfeld’s research.

Together they designed a 20-piece capsule collection, set to debut in Hervé Léger boutiques and with select retailers (including Net-a-porter) starting in May. The assortment includes a minimalist palette of mostly black and white, with a pop of red (a “little supermodel dress” directly nodded to a fiery bandage dress worn by Crawford on Restoin Roitfeld’s moodboard), in reimagined classic separates and dresses that celebrate the female form through sexy, chic attire. 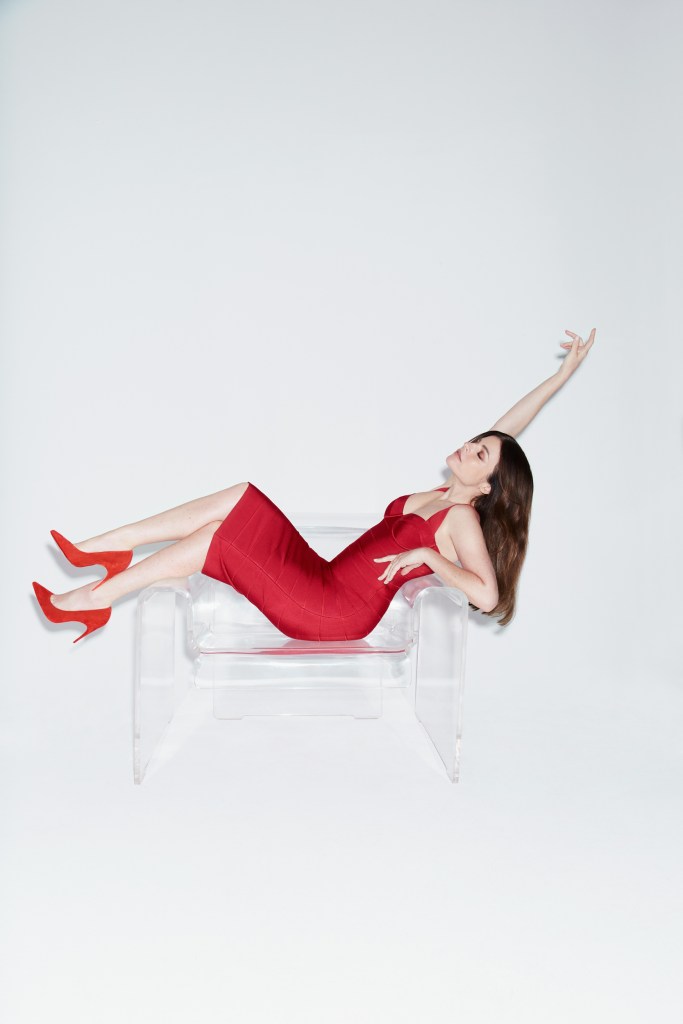 “I think the whole point of the collection was to honor all the iconic pieces of Hervé Léger, but with a modern twist,” Restoin Roitfeld said over a Zoom call. “One of the modern twists to it is actually the fabric. There are a lot of sustainable and recycled fabrics; I think this is how we merge legacy with future at the same time.”

Through the collaboration, Restoin Roitfeld aimed to “bring some fun in the world but in a responsible way.” She pushed Juul Nielsen to incorporate more recycled and sustainable yarns (in accordance with the Global Recycled Standard) to the label than ever before. Furthermore, they designed silhouettes with timeless appeal in mind.

In addition to Nineties-inspired, modern minimalist cocktail attire — little black dresses with intriguing decollete, sheer panels or, most compelling, as a strappy number (inspired by an image of Kate Moss “looking so rock ‘n’ roll but also chic”) — Restoin Roitfeld referenced the importance of ballet dance. 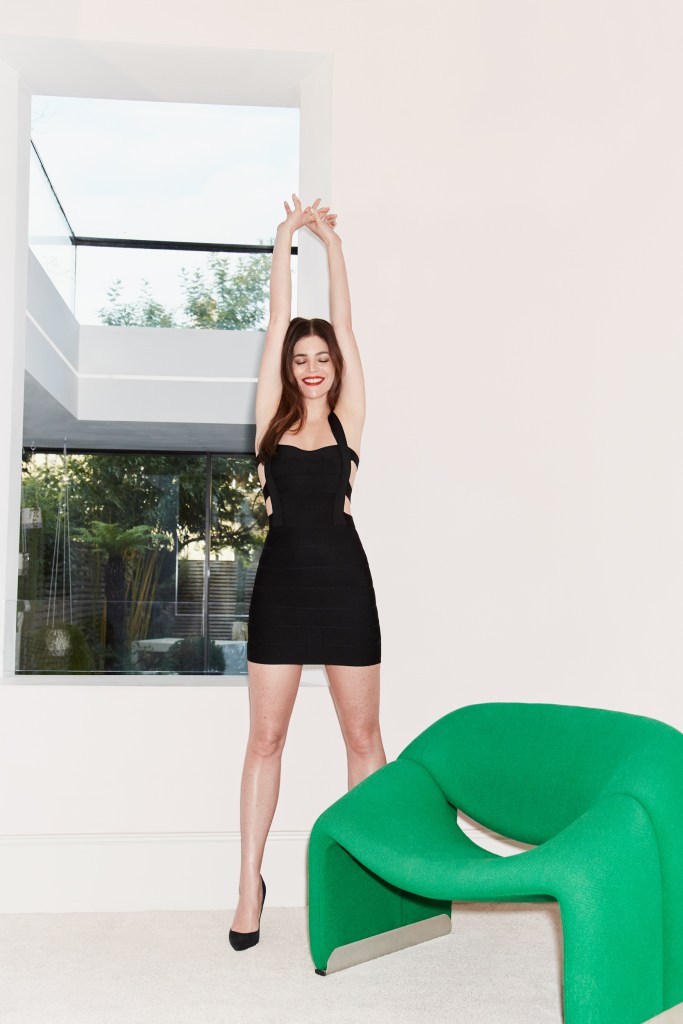 “I remember as a kid, wearing ballet stockings but as a top…cutting a hole through the legs and wearing almost in a grungy-way. I was 14 back then,” she quipped.

Juul Nielsen rendered these influences into elongated, sheer sleeves on a white minidress. The detail helped break the look out from being just another “sexy little dress” to something with a bit of an edge. A sleek white bodysuit and monochromatic black bodycon jumpsuits also played nicely to this idea. 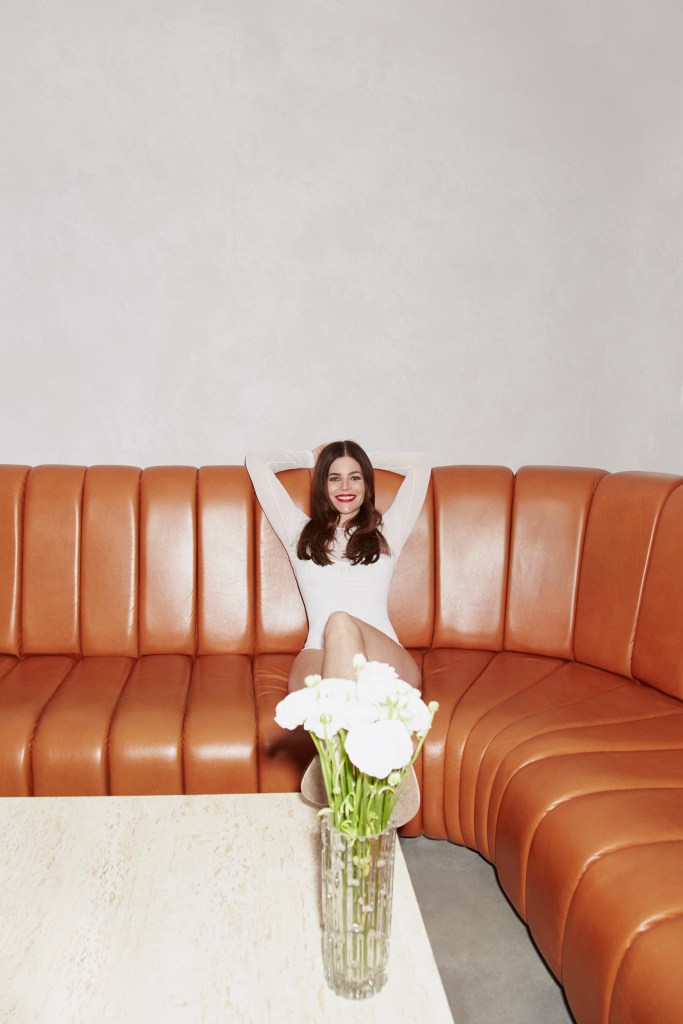 Comfort and ease, too, played an important role in the collection. For instance, Juul Nielsen used the technique of weaving Lurex into the outside layer of a black, long-sleeve number, and heat-pressing it on to get a mirroring effect, leaving the inside of the garment soft and comfortable for everyday life (the dress was also lightly referenced to be composed of sustainable materials). A tuxedo blazer, although structured, also came in knit; Restoin Roitfeld reffered to the piece as feeling snug and cozy, like a cardigan. The collection’s ease — the garments require no necessary steaming — rounded out this point. 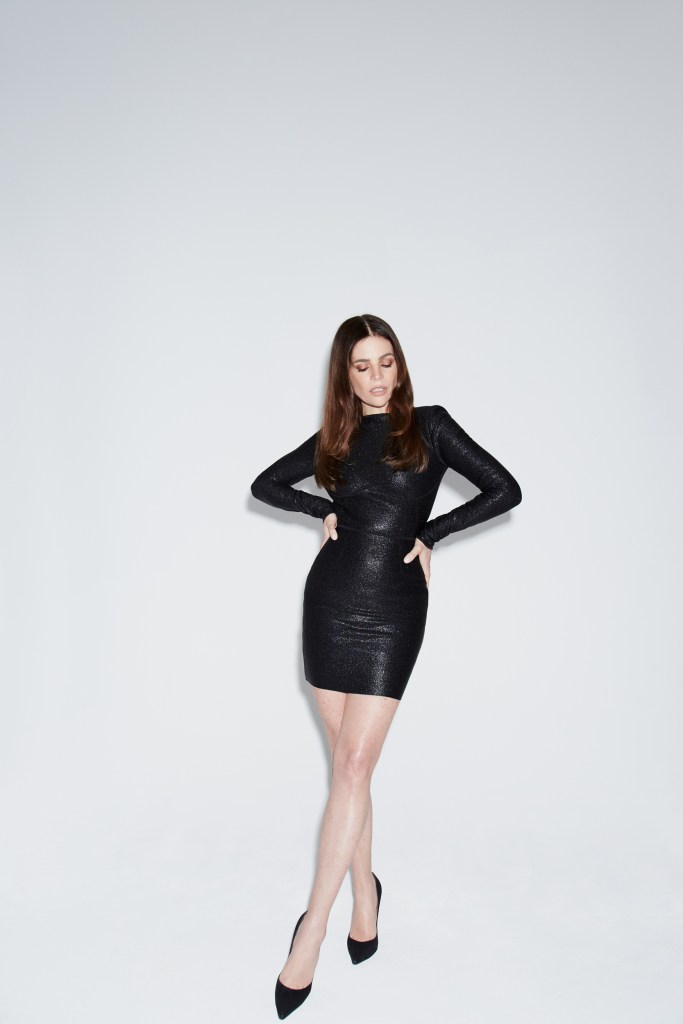 Overall, the capsule proved to be a strong debut collaboration for the brand, heightened by its look book photoshoot of Restoin Roitfeld through the lens of photographer, editor and founder of Girls.Girls.Girls Magazine, Claire Rothstein. Rothstein’s viral film “Be a Lady They Said,” featuring narrator Cynthia Nixon, embodies the importance of celebrating the female form while spotlighting pressures women face on a daily basis, which Juul Neisen and Restoin Roitfeld reiterated through their designs.

“When we had the opportunity to work with her, it was a no brainer,” Restoin Roitfeld explained. “For me, it was really important when we were talking about ‘if you have a sexy girl and a sexy collection,’ we need to have a photographer who understands us….There’s a sense of sexy but also a bit of humor in each image. It’s charming and fun, I hope people will sense this when they see the images.”