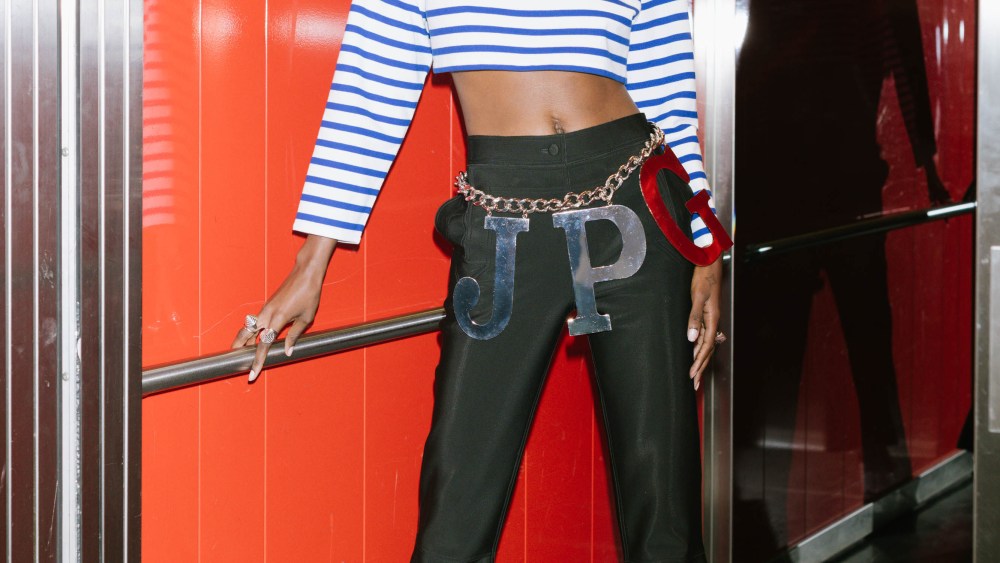 The house of Jean Paul Gaultier is sailing back into ready-to-wear — this time with rotating creative crews and a digital-first business model.

The first product volley — a collection devoted to Gaultier’s fetish mariner theme, with a little help from Palomo Spain, Ottolinger and other young fashion talents — is to debut on Friday on the brand’s new e-store and on Ssense.com.

It comes 16 months after the acclaimed designer staged his barn-burner of a couture swansang — and six years after France’s beloved “enfant terrible” halted men’s and women’s rtw to focus on high fashions and fragrances.

Consider the rtw comeback the first expression of an overriding strategy “to celebrate Jean Paul Gaultier, its values, its archives and its history,” said Antoine Gagey, general manager of the Puig-owned fashion house.

In an exclusive interview, his first since joining the maison in January 2020, Gagey elaborated on the strategy of serial collaborators, initiated in March 2020 when the house revealed that Sacai’s Chitose Abe would create a one-off couture collection for Jean Paul Gaultier in the wake of his retirement from the runway. Initially scheduled for a July 2020 unveiling, that show has been postponed twice due to the coronavirus pandemic, and should go ahead during the next Paris Couture Week, scheduled for July 5 to 8.

The guest-designer strategy spills over into the return to rtw, with Gagey describing a freewheeling approach to collection drops that could involve one or several invited creatives, and/or rely on the in-house design team, which includes many seasoned talents who know Gaultier’s oeuvre by heart.

He said the rtw drops will not follow the current seasonal calendar; will vary in size and scale; often incorporate archival styles, vintage or upcyled/customized pieces, and be distributed with a rotating cast of top-tier distribution partners. Gagey envisions about six to 10 drops a year, with the next one likely timed for October.

The collection arrives just in time for LGBTQ Pride Month and includes audacious mesh T-shirts bearing a 1990 Pierre & Gilles portrait of Gaultier, plus a new graffiti print with racy slogans and references to queer and punk subcultures.

Rtw will retail from 150 euros to 750 euros, a range Gagey characterized as in line with the brand’s legacy of dressing couture ladies and cool kids on the street. Pieces customized by the atelier run up to 1,500 euros.

Gagey noted that Gaultier, who continues under contract with the house as an ambassador, remains involved in the future of the company, including the selection of guest couturiers. “He’s still working with us on different aspects of the brand, but he didn’t want to play that role of designing the collection anymore. He’s still helping us, giving us some direction,” he explained.

To ensure that the various design projects follow an overriding brand or narrative arc, told in a “consistent and interesting way,” the house has also named a creative and brand director, Florence Tétier, who quietly joined last September, Gagey said. Trained as a graphic designer, Tétier is best known for her creative role at Novembre magazine.

At Gaultier, Tétier plays the role of an “editorial director,” overseeing content across the brand’s social channels, and helping to “identify the right talents for the right projects,” Gagey said.

For example: The sailor collection will be backed by a fashion shoot done for social channels, and an influencer campaign hinged on “friends and family” of the house, which includes the likes of model Bella Hadid, whom Gagey boasted has a near-encyclopedic knowledge of the house and who frequently wears vintage Gautlier designers on her Instagram feed.

Seated on a black velvet banquette under the soaring ceilings of the Philippe Starck-designed couture salons, which were perfumed with incense just before a visitor arrived, Gagey noted that the idea of different designers interpreting one couture brand came from Gaultier himself, who alighted upon the idea back in 1987. That year, Jean Patou found itself without a designer when Christian Lacroix, who famously ignited the brand, left to set up his own brand backed by luxury giant LVMH Moët Hennessy Louis Vuitton. (Gaultier also worked at Patou earlier in his career.)

“This project and this concept would not fit every brand,” said Gagey, a thoughtful and poised executive who lauded Gaultier’s 50 years of avant-garde creation that was prescient in its embrace of gender fluidity, diversity, inclusivity and political activism.

And putting men in skirts, a cone bra on Madonna and regular folks in tattoo print tops was just the tip of the iceberg. “He has done everything,” Gagey enthused, noting Gaulter has designed collections for babies, homewares, denim and even makeup for men over his long career, leaving behind an extensive archive to inspire young creatives.

The rtw relaunch comes amid heightened interest in Gaultier, with prices spiking on a range of resale sites.

According to Vestiaire Collective, searches for vintage Jean Paul Gaultier were up 570 percent in the last six months and sales in the first quarter of 2021 increased by 30 percent, with items like a mesh maxidress from the designer’s Cyberpunk Amazonian fall 1995 collection selling for more than 3,000 pounds.

“We see, today, a huge potential and a huge excitement around Jean Paul Gaultier,” Gagey said, citing a significant and lasting impact from the January 2020 farewell show, an hourlong bonanza of fashion daring and camp humor. “We feel that people are waiting for this moment to see new ready-to-wear come back.”

He noted the brand had successfully trialed rtw via collaborations, including with New York’s Supreme, China’s Bosideng and Japan’s Onward Group, all in 2019. The designer further widened his global reach in recent years via tie-ups with Target in the U.S. and Australia; Lindex in Sweden; OVS in Italy, and Seven and I for Japan.

Fashion exhibitions that have traveled the world have also fanned affection for the brand. “The Fashion World of Jean Paul Gaultier: From the Sidewalk to the Catwalk,” made its debut at Montreal’s Museum of Fine Art in 2011 and was seen subsequently by 2 million visitors in 12 cities worldwide. An exhibition of wedding gowns recently wound up at the Museum of Contemporary Art in Belgrade, following showings in Montreal and Buenos Aires.

Gagey said these would continue, disclosing that Jean Paul Gaultier curated an upcoming exhibition at the Cinémathèque Française that explores the role of fashion in film. Gaultier is an avid movie buff and has costumed several films, including “The Fifth Element,” “The City of Lost Children,” “Kika” and “The Cook, the Thief, His Wife & Her Lover.”

The designer’s savoir-faire will also be showcased in the France Pavilion at Expo Dubai 2020, now scheduled to open later this year and run into 2022.

That said, the new e-store will have a storytelling approach, loads of editorial and an educational component to get consumers up to speed on the designer’s storied fashion career, which included a seven-year stint as the women’s rtw designer of Hermès.

Haute couture remains a bedrock of the house, with Gagey citing “solid” business and positive feedback and curiosity from its clients about the forthcoming collection by Sacai.

“We think that it will give a new mood and a fresh start to the Jean Paul Gaultier house. And I think we will probably be able to leverage a new generation of customers — maybe younger, maybe in other territories,” he said, noting the house does not have so many couture clients in Japan, where Abe is well known, for example.

Gagey declined to say who might be the next guest couturier, citing Gaultier’s wish to keep it confidential until the Jean Paul Gaultier x Sacai collection has been unveiled.

WWD reported on Jan. 15 that Glenn Martens, the Belgian designer behind Paris-based Y/Project and also the new creative director of Diesel, is probably up next. In 2008, Martens staged his graduate show at Antwerp’s Royal Academy of Fine Arts and Gaultier recruited him as junior designer for his women’s pre-collection and the G2 men’s label.

To be sure, it should be an enticing opportunity for any marquee or up-and-coming designer to interpret Gaultier’s vast and eclectic design vocabulary, and to take advantage of his atelier’s know-how with tailoring and elaborately embellished flou.

While Gagey only has purview over the fashion house, he cited close collaboration with his counterpart on the beauty side, and said Puig “wishes to reinforce the collaboration between fragrance and fashion.”

“We work very closely, we share the same heritage, we share the same DNA, we share the same history,” he said. “We share some teams between fragrance and fashion to make sure that there is this one brand vision that we want to bring to life, while respecting the specificities of each industry.…We are today working on common projects that will be revealed soon.”

Gaultier had previously licensed his rtw to Italian manufacturers Aeffe and Gibò Co. SpA, the designer’s original partner in the ’80s. Like his fashions, Gaultier’s business model went against popular convention, based heavily on licensing, even for core products like rtw and jeans.

EXCLUSIVE: Serbia Says ‘I Do’ to Gaultier Wedding Exhibition