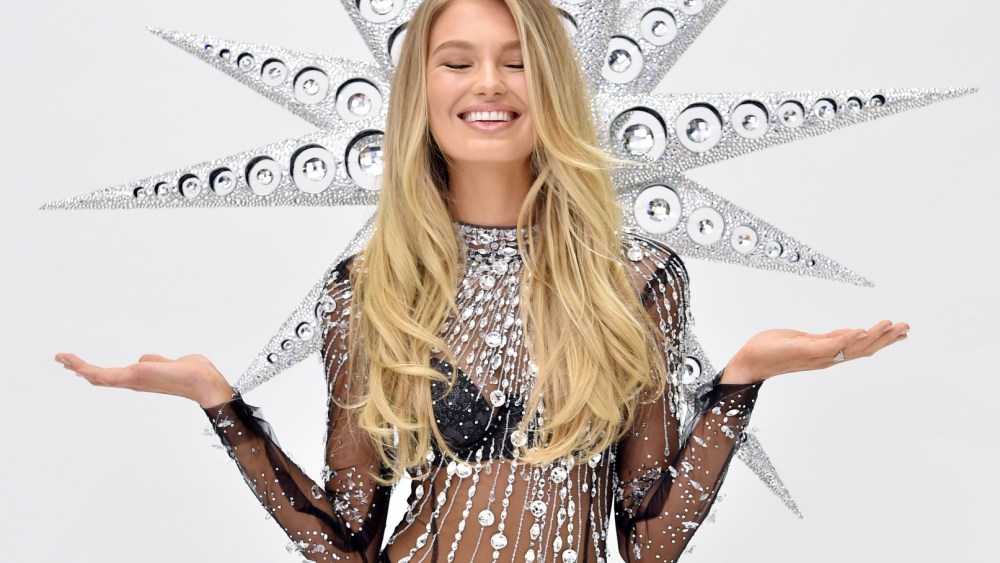 “This year’s is one of my all-time favorite looks we’ve done,” mused Monica Mitro, Victoria’s Secret’s executive vice president of brand communication and events, of the coveted 2018 Swarovski Look. Victoria’s Secret Angel Romee Strijd was chosen to strut this year’s Shooting Star Swarovski Look during the Celestial Angel part of the show on Thursday.

The look is collectively adorned with over 125,000 Swarovski crystals — with more than 55,000 on the celestial star wing and 70,000 on the full-body sheer, black bodysuit (worn over a lacy black bra and matching, cheeky briefs). The 3-D mono-wing, which breaks the traditional paired wing concept and was designed by Marian Hose, includes a seven-pointed crystal-encrusted star with circular cutouts and suspended, oversized Chessboard crystals. The bodysuit is adorned with clear and silvernight colored flat-back hotfix and sew-on crystals cut into stars, moons, rhombuses, triangles, classic drop pendants and more that cascade from the neck down to give stardust and constellation effects. The look weighs 27 pounds and it took more than 250 hours to apply the Swarovski crystals to the wing alone.

“I couldn’t keep it a secret for even a minute,” declared Strijd about receiving the call from her agent, midfamily dinner back in Holland, about being chosen to wear the look. Strijd shines bright in the Shooting Star look, saying, “When I wear the Swarovski look I feel like a superhero. Ha! All the sparkle and shine makes me feel so glamorous.”

This year’s show marks Strijd’s fourth year as an Angel and fifth Victoria’s Secret show. “Time flies…please slow down,” she added, remembering her favorite “dream come true” memory of walking her first show as an Angel in 2015 down the runway with wings.

“I do amp up my workouts before the show, working out daily. I also try to cook every meal myself, so no processed foods. And drink extra water,” Strijd explained of her preshow plans, while postshow she’ll be flying to Vegas the next morning for a job, “but staying two nights extra to celebrate with friends.”

Swarovski is upping its already impressive sparkly game — already being the sole provider of crystals — at this year’s show. Last year’s Swarovski exclusive “Crystal Anniversary” look veteran, Elsa Hosk, will unveil the first $1 million Fantasy Bra designed by Atelier Swarovski, which incorporates (for the first time) lab-created diamonds and responsibly sourced topaz; additionally, the brand has designed a commercialized version with Swarovski crystals for fans to purchase a replica for $250, in-store or online on November 29. There was no mention as to whether the Crystal Look would be commercially produced.

“The Victoria’s Secret Fashion Show started in New York, so we’re really excited to come back home,” Mitro mentioned of the fast-approaching show, adding there would be 90 looks in the show, half of which would dazzle down the runway in Swarovski crystals. “Everything from lingerie, to shoes, to wings…we’ve used over 850,000 crystals,” Mitro added.

In the era of the #MeToo movement, and with television ratings down during last year’s Shanghai show, critics’ questions about the show’s relevance are continually circling. While Mitro declined to comment on how the brand is actively working to empower women or if the show will have any special nods to the movement, the models are standing strong behind it. Strijd stated that through her work, she hopes to empower women by “always try to spread positivity, to see the bright side of things.”