The American designer will stage his first coed show for the fall 2020 season on March 1 in Paris.

Bucking the recent trend away from coed runway events, Thom Browne plans to combine his men’s and women’s fashion shows starting on March 1 with the fall 2020 season, WWD has learned.

It marks a rare setback for Men’s Fashion Week in the French capital, which has been bulging with marquee names and largely skirted the coed trend that had gripped Milan in recent years. The women’s week is scheduled for Feb. 24 to March 3.

Browne had foreshadowed the move to a combined show with his spring 2020 collections, which both filtered the pageantry of 18th-century dress through the lens of East Coast prep. (Translation: tight seersucker jackets and pannier skirts for him and her.)

In an exclusive interview Wednesday, Browne explained that his decision was driven purely by creative concerns, rather than business or cost ones.

“There’s been a couple of seasons that I’ve been talking about my collections being connected, and I think it’s time to put that into actual practice,” he said over the phone from Milan, where he was presenting and selling his pre-fall 2020 men’s collection.

One of American fashion’s most daring showmen — whose quirky shows fall somewhere between ritualistic performance and fairy tale — Browne staged his first men’s show in New York for the fall 2006 season. He joined the Paris men’s calendar for spring 2011.

He expanded into women’s wear in 2013, showing his fall collection during New York Fashion Week. He has been showing his women’s in the French capital since the spring 2018 season. 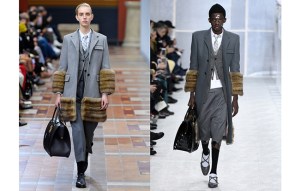 Browne was mum on the theme for next season, while promising a show that’s “going to be longer and more theatrical. It’s going to be the same approach, as conceptual, as experiential as any other show. You’ll see the perfect marriage of the two collections.”

While fashion swung to coed formats in recent years, slimming down the men’s schedule in Milan in particular, a conscious uncoupling is under way, with Gucci and Salvatore Ferragamo among Italian brands that recently revealed plans to separate shows and return to Milan Men’s Fashion Week in January.

Versace, by contrast, plans to embrace the coed format next year, with Donatella Versace characterizing it as “an experiment that for the moment is limited to 2020.”

For his part, Browne is happy to go against the grain. “I like to do the opposite of everyone else,” he said. “What’s good for one is not always good for another.”

At present, Browne’s business is roughly 60 percent men’s, and 40 percent women’s. “Women’s has been growing really quickly and men’s has been around longer and that’s why men’s is bigger,” he explained matter-of-factly.

Showing in Paris, he noted, has been a boon. “It’s been hugely positive. The business has grown quite substantially because of it. I think people maybe understood my approach to design more in Paris.”

Asked if he sees men’s and women’s fashions converging more, Browne replied: “I don’t know about converging: There’s more connection between the two.

“I love the world we live in,” he continued, alluding to the blurring of gender lines. “Men are open to a lot more different things, and women are also more open.”