The brand will present its new licensed men's wear collection, Mister Mister, to buyers in Paris from today. 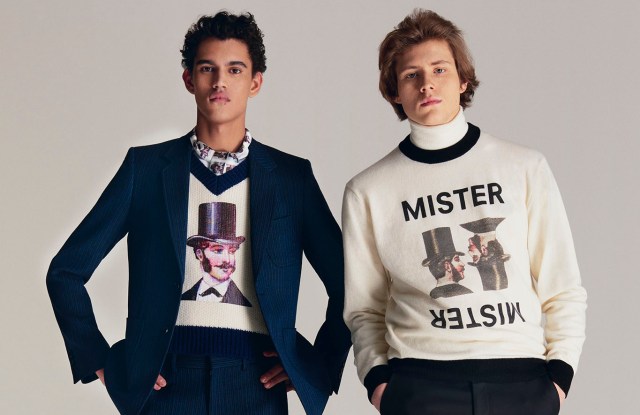 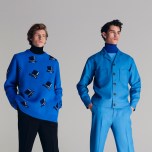 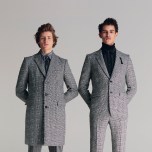 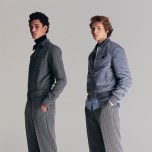 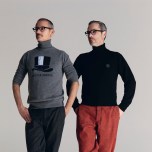 PARIS — Five years after shuttering their ready-to-wear business, Viktor & Rolf are returning to men’s wear with a new collection that combines their signature dandy style with a more conscious approach to design.

The label, which belongs to Italian entrepreneur Renzo Rosso’s OTB SpA group, has entered into a worldwide licensing partnership with Tokyo-based Shiffon Co. Ltd. for the production and distribution of the new Mister Mister line, which will be presented to buyers from Jan. 15 to 22 during Men’s Fashion Week in Paris.

In addition, Viktor & Rolf has teamed with Swiss underwear-maker Calida on a collection of underwear and loungewear for women and men that is 100 percent compostable — billed as the first of its kind. The line is due to be presented at the Salon International de la Lingerie in Paris from Jan. 18 to 20.

In an exclusive interview with WWD, designers Viktor Horsting and Rolf Snoeren opened up for the first time about the reasons that led them to discontinue their women’s and men’s collections in 2015, saying the difficulty of reconciling their creativity with fashion’s industrial process led them to burn-out and depression.

“We don’t want to condemn the fashion industry or anything. It’s a personal journey and it’s a personal experience that we have had, and now we are trying to find a new way of doing business, of using our creativity,” Horsting said.

Conceived as an extension of their personal wardrobes, Mister Mister combines tailoring with casualwear, and features a recurring top hat motif rendered in jacquard knits and trompe-l’oeil techniques. A portion of the collection is made with stock fabrics, with leftover fabrics used for embroideries on some styles.

The advanced contemporary line is made up of around 130 pieces, with prices going from 100 euros for accessories such as neckties to 2,000 euros for outerwear. The look book, featuring models in pairs, nods to the 2003 debut of their previous Monsieur line, in which Horsting and Snoeren dressed each other on the catwalk. 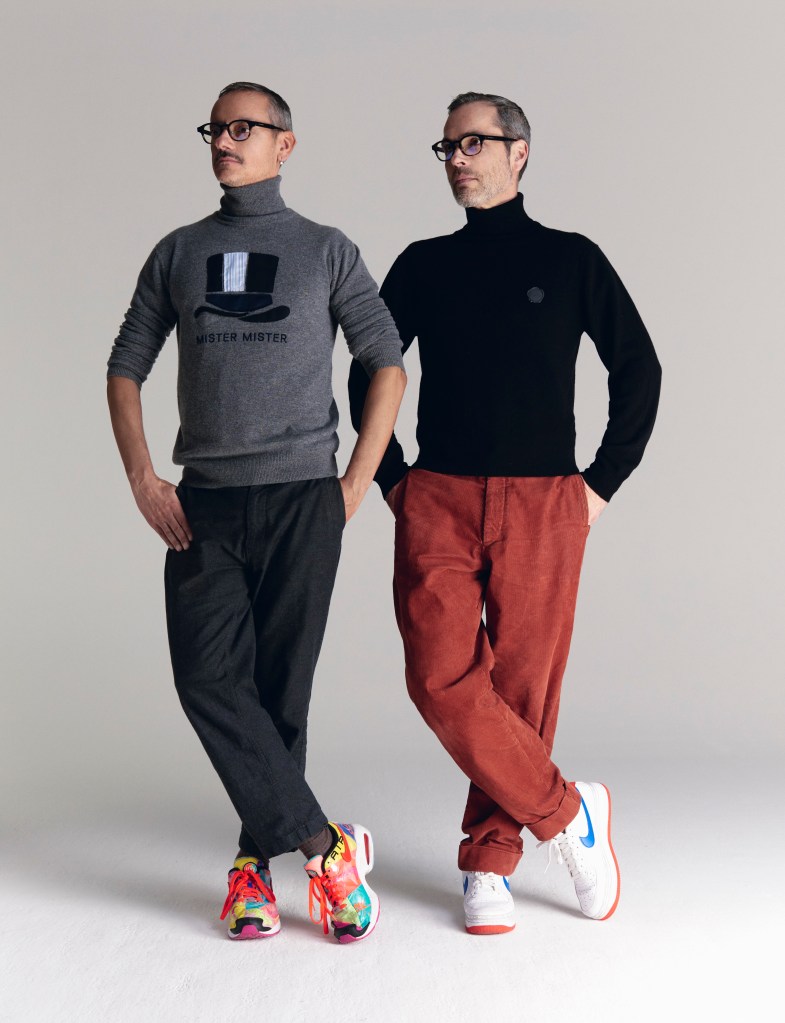 Andrea Collesei, chief executive officer of Viktor & Rolf, said the Mister Mister collection will go on sale with selected wholesale partners in July. “We believe that there is a huge potential for this line to get a quick start on the market, starting from Japan,” he said.

Snoeren emphasized that skipping the runway helped the brand bypass pitfalls of the past.

After closing their rtw business, the Dutch design duo initially focused on haute couture. They have gradually reintroduced collaborations and targeted clothing lines, starting with a bridal collection in 2016, followed by eveningwear and a small collection called Tulle.

“It took a while to get here,” Horsting said. “It was really a process of experimentation and taking one step at a time.”

For their spring couture show, scheduled to take place on Jan. 22, they have teamed with Brazilian brand Melissa, famed for its plastic shoes, to produce a recyclable shoe and bag, which will be available for sale the following day on the Viktor & Rolf e-commerce site, and subsequently on Farfetch. 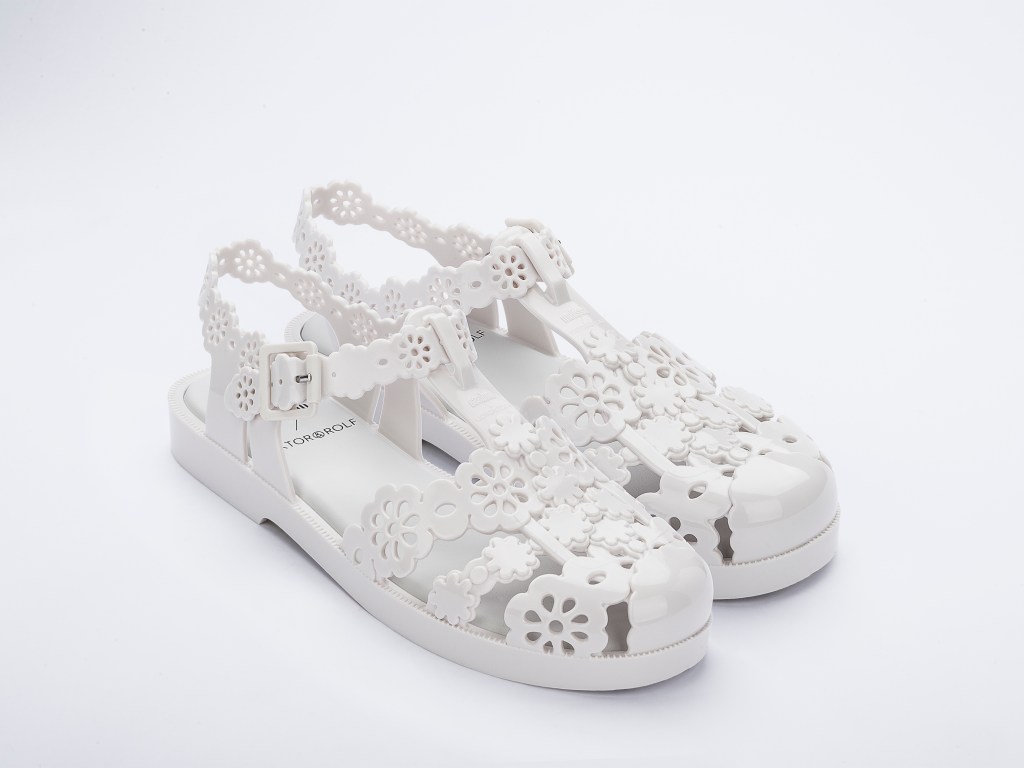 A shoe from Viktor & Rolf’s collaboration with Melissa.  Courtesy

Collesei said the strategy is paying off. “We see now that this approach seems to be quite in tune with what a group of sophisticated consumers is asking from us, and probably from the fashion world in general. So the business has been growing by 20 to 30 percent a year, and we have a very ambitious plan,” he said.

“Our ambition is to reach around 300 million euros in retail sales in five years,” Collesei added, noting this included revenues from the brand’s fragrances, produced under license with French cosmetics giant L’Oréal. “The objective is not necessarily to become the biggest brand in the fashion industry, but for sure it’s to be one of the most meaningful and full of creativity.”

Rosso touted the designers’ leadership on environmental issues. “Viktor & Rolf are fashion artists that apply creative experimentation not only in the development of their fashion but also in their approach to business,” he said in an e-mailed statement.

“Redefining a new, meaningful and thoughtful way of working is the epitome of true luxury. I fully believe in and trust their creative vision and the growth of the Viktor & Rolf brand moving forward,” Rosso added.

Prized for their experimental approach to fashion and reverence for glamour, Horsting and Snoeren started collaborating after graduating from the Netherlands’ Arnhem Academy. They shot to prominence in 1993 by winning the International Festival of Fashion and Photography in Hyères, France.

But they confessed there were times in recent years that they felt bleak about their future in fashion. “After we stopped ready-to-wear, my relationship also ended, my dog died and I sold my house. So I felt terrible for a long time. I can laugh about it, because it’s almost like a bad movie,” Horsting said.

“And what I find so amazing is that all throughout this period of darkness, let’s say, we always continued to do couture collections, and somehow this was always a light,” he said. “The creativity was always there, and that was somehow so reassuring to know that that’s a continuum.”

Though the couture collection is mainly purchased by collectors and museums, it is regularly part of the pop culture conversation. The spring 2019 collection, featuring supersized gowns emblazoned with one-liners inspired by Instagram, went viral, and Hailee Steinfeld later wore the “No Photos Please” dress to the Met Gala.

Outside their twice-yearly couture shows, the designers initially dedicated their free time to activities like fitness, yoga, psychotherapy and meditation. “It was really like some sort of black hole, and then almost like a post-traumatic stress disorder,” Snoeren said. 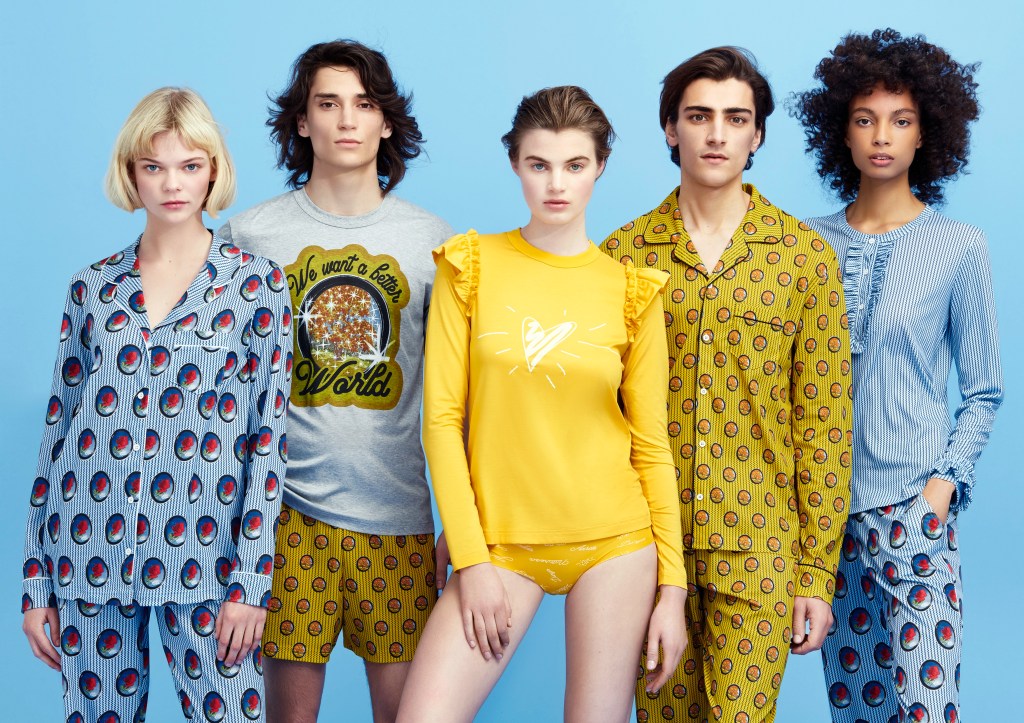 The Calida collection is an example of their new philosophy. Made of compostable, sustainable Tencel and Lyocell, it bears the Cradle to Cradle Certified label awarded by the nonprofit Cradle to Cradle Products Innovation Institute. The motto “We Want a Better World,” lifted from the spring 2019 couture show, appears on many of the items.

A first drop of 23 styles, including T-shirts, seamless panties, boxer briefs and short pajamas, will arrive in stores in May. A second delivery, featuring 40 new daywear, loungewear and nightwear references, will be available in October.

Collesei said there was rising consumer interest in sustainable clothing, as evidenced by the success of Viktor & Rolf’s Re:Cycle collection for Zalando in 2018, which was made from leftover clothing. “The product sold out basically immediately, so we believe there are a lot of consumers that are asking for a luxury product that is also environmentally friendly,” he said.

He noted that while the Tulle line is available in around 100 stores worldwide, including Dover Street Market in Tokyo, Browns in London and LuisaViaRoma, the Calida line should be distributed in 500 to 1,000 stores worldwide. 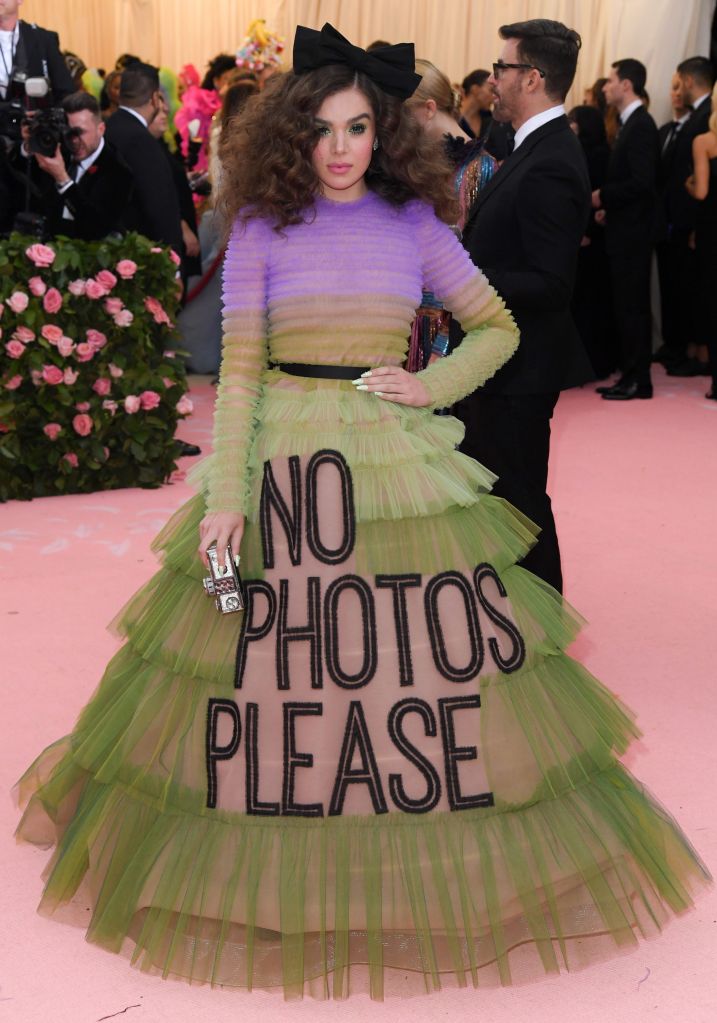