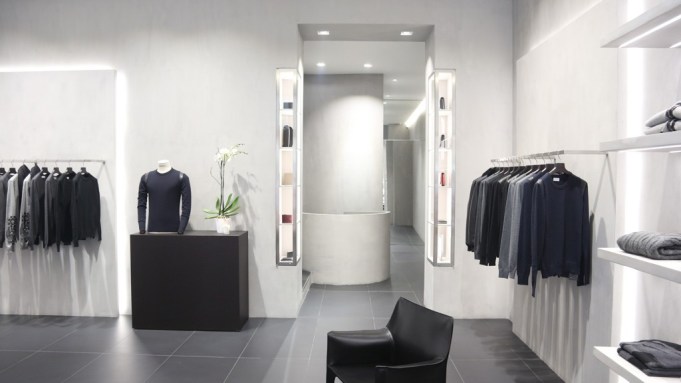 PARIS — “There comes a point in luxury where it’s better to have [one’s] own store before moving into shop-in-shop distribution, where one gets mixed together with other products,” said Jean-Victor Meyers, cofounder of Exemplaire.

That’s why the upscale knitwear label for men is opening its first stand-alone unit today at 334 Rue Saint-Honoré, Paris’ luxury shopping street and, according to the young entrepreneur, “the perfect location” for the up-and-coming label.

Meyers, who founded the company with his friend Louis Leboiteux in 2011, said the duo felt it needed to have a sales team dedicated exclusively to Exemplaire, providing a “memorable experience” for the customer, and raise brand awareness.

“This flagship will help us expand the brand internationally,” he added, with Asia, the United Arab Emirates and possibly Russia next on his list.

Meyers, who is a L’Oréal heir, said he is by no means bored by the notion of selling beauty, but to find knitwear matching his taste had proven a challenge. “Either you find high quality but in a very classic fit or the other way around,” he said. “Whereas we approach it as consumers would, proposing both a good fit and the best of qualities.”

Besides, “it’s good to have several projects in [your] pocket,” the 28-year-old grinned.

Exemplaire produces 80 percent of its offering through small craftsmen in France and 20 percent in Italy, with high-end cashmere and fine merino wool as its fabrics of choice. The studio-designed pieces retail from 650 euros, or $841 at current exchange, for a cashmere sweater, to 2,400 euros, or $3,107, for an extra-soft cashmere hoodie with 20 percent chinchilla, one of the label’s bestsellers.

The brand has expanded its offering beyond knitwear to include small leather goods, which the duo designs itself, and other ready-to-wear pieces such as leather jackets, both of which can be customized at the new address.

“They are made by hand anyway, so there won’t be any significant price difference when made-to-measure,” Meyers noted, pointing to a 5,800 euro, or $7,500, jacket.

A weekender crafted from porosus crocodile leather, a particularly luxurious and rare skin, that goes for 30,000 euros, or $38,884, sold even before the shop had officially opened on Friday.

T-shirts, pants and jumpsuits are expected to enter the selection next year.

As for the 700-square-foot venue with a minimalist yet tony flair set in a 17th-century building featuring high ceilings, textured gray walls and shagreen furniture, Meyers said: “We were pretty much inspired by some art galleries or museums where the materials, as well as the lights, are only aiming to highlight the collections.”

The store is also slated to stock some exclusive pieces for women, who Meyers said have developed “a strong interest” in the products their boyfriends have in their closets.

In 2013, Exemplaire doubled its sales, now counting Barneys New York, Dover Street Market in London and The Corner in Berlin among its wholesale partners. The brand is also distributed online via MrPorter.com.

Meyers said he and his business partner want to expand their label, “but at the same time we want to keep it very niche and confidential. Besides, it’s the only way to not compromise the quality of our product as we mostly work with craftsmen.”