Hexoskin, a smart-shirt that allows real-time health monitoring, will be on view in "Cloud Couture: The Intimate Connections Between Fashion and Technology." 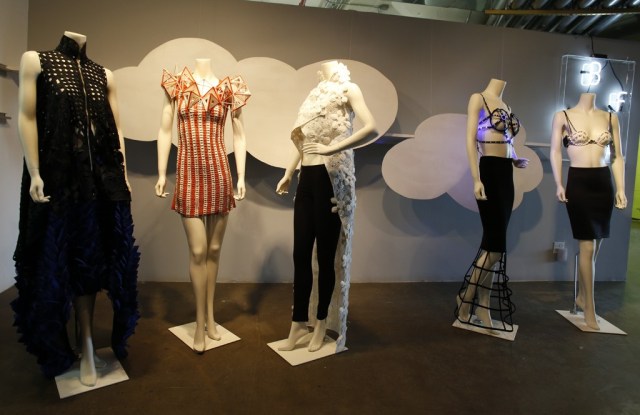 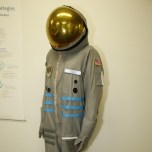 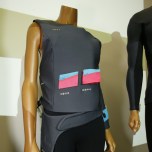 NEW YORK — The idea of a sports fan sitting in a bar watching a game, wearing a smart-shirt that simulates just how fast his favorite player’s heart is beating and how heavily that competitor is breathing may sound like something straight out of “Jupiter Ascending.” But that reality is increasingly in reach.

The aforementioned wearable-technology-enhanced Alert Shirt, and Hexoskin, an open data smart-shirt that allows real-time remote health monitoring on smartphones and tablets using Bluetooth, are just two of the step-into-the-future garments that will be on view in “Cloud Couture: The Intimate Connections Between Fashion and Technology,” an exhibition which opens Tuesday. The hands-on, interactive exhibition will be a first for the Brooklyn Fashion + Design Accelerator (BF+DA), Pratt Institute’s expansive digitally minded incubator. The show explores how technology is driving brand innovation and redefining clothing through wearable technology meant to enhance health care, beauty, safety and connectedness.

During a preview Thursday, BF+DA executive director Debera Johnson said, “When I think about the 21st-century conversation, it includes sustainability and technology. We want to ramp up that conversation. If you’re excluding those two things in your design work, as well as in your thinking, your strategy and the conversation you’re having as a creative person, then you’re just missing the point of the century.”

Johnson, who along with Rebeccah Pailes-Friedman and Henry Yoo curated the show, said, “Twenty years from now, you won’t even think about how your clothing is wired and is connected to the Internet. Brands will be able to track where you are and see who you’re with. You know how Google just knows what you want? You Google something and you get 15 different answers about the things you are starting to think about. That’s going to happen in more three-dimensional ways and in the shopping experience.”

“Cloud Couture” visitors will get a sense of that by using a 3-D scanning station to map their bodies, and then they can digitally drape fabric on their avatar to create their own design. They can also check out Sensoree’s GER (Galvanic Extimacy Responder) Mood Sweater, which has a bowl-shaped collar with LED lights that change color based on instant biofeedback from the garment’s sensors. Designer Billie Whitehouse’s Navigate jacket uses haptic vibrations to guide the wearer along a predefined course. The frequency and intensity of the instructions — whether that be “a soft left, merge left or hard left” — will vary depending on body placement and intensity, Johnson said.

More intriguing is the assortment of wearables with outboard power and wireless communication prototypes that were developed for NASA to try to facilitate tasks during space flights. Pailes-Friedman, who led two NASA-related projects that are featured, said having reconfigurable swatches (akin to how a Boy Scout wears badges) essentially allows the astronaut to wear his or her tools to make them easier to reach, to test and wash.

Another area will highlight DryDye, a dyeing process that relies on highly compressed supercritical carbon dioxide to distribute the dye through fiber. Noting that the textile industry generates 20 percent of the world’s industrial pollution, Johnson said the DryDye process uses no water, 50 percent less energy and 50 percent fewer chemicals. Adidas is among the companies using DryDye.

Designer Francis Bitonti presents a different idea with his Adobe Molecule Show. His design uses an algorithm-generated computational model that was developed with Adobe software. Then the file is sent to a Stratasys 3-D printer that built the shoes, layer by layer and pixel by pixel.

Given the breadth of advancements, Johnson said, “I hope people will take away an understanding of the multiple ways technology is fitting in a very personal kind of relationship with clothing and your body and what you’re doing.”

The show closes Feb. 12 with a panel about how wearable technology is reshaping our relationship with the Internet, brands and personal privacy. The panel will include Makerbot’s Bre Pettis, Whitehouse, Bitoni and Fast Co.’s Leah Hunter.