Designers are expanding their reach to try to get more business from the two million-plus weddings held in the U.S. each year. 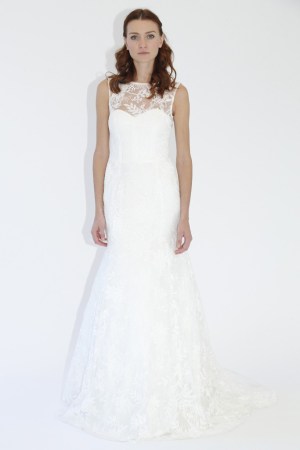 “It’s really about a search to take bridal into a new vocabulary, which I think is a brave thing to do.”

That was how Vera Wang summed up her approach to 2014 and she is not alone in that quest. Whereas in the past, still shots of wedding gowns would suffice for the ever-discriminating brides-to-be, now more designers and brands are trying to bring those looks to life. By posting video of their bridal runway shows, rounding out blogs with more wedding-planning tips or offering more ready-to-wear-inspired gowns, designers are intent on keeping current. However automatic such efforts might seem to the rest of the fashion industry, bridal has always leaned on the traditional.

Visitors to Wang’s blog can not only check out her latest dresses, but can also watch a video of how the show came together, from the backstage makeup to adjusting the lights and cameras. Not one “to phone it in,” Wang said, “This time around it’s about structure, silhouette and a certain kind of pared-down modernity. There is a riff of Audrey Hepburn in ‘Breakfast at Tiffany’s’ but it was more about where we were going with the more modern look of architectural clothes.”

Referring to the graphic use of black and white in her collection, Wang said, “Obviously, I hate to use the word. It’s been overused. But it’s a new way of looking at sophistication, sensuality and structure.”

To that end, Wang placed a greater emphasis on the design of the backs of each dress and sent some models down the runway with long black leather gloves to show slivers of skin.

Right after the Carolina Herrera bridal collection was presented last week, the company was quick to post a video of the show on its Web site. Shoppers can also check out full-length online photographs of each of the 30 dresses. Each style is shown with two close-ups of different elements of the dress and a detailed description. In addition, the company launched a bridal blog timed to its show last weekend. Visitors to carolinaherrerabride.com can explore the designer’s bridal collection and find out about floral bouquets, bridesmaid primping, upcoming trunk shows and other need-to-know info.

The post-show race to the Web has created a chasm between retailers and manufacturers, said Mark Ingram, who runs an atelier in Midtown Manhattan. “There is this explosion of information but then it’s six months before those dresses are actually in stores. That can shorten the shelf life of a trend,” he said. “We’re lucky that we have trunk shows so girls can at least see the dresses before they arrive in stores. Girls who live in New York, L.A. and Chicago are definitely at an advantage.”

Beyond the dress, veil and accessories, some designers are expanding their reach to try to get more business from the two million-plus weddings held in the U.S. each year. With new bridal footwear collections for each, Brian Atwood and Betsey Johnson are trying to chip into the estimated $75 billion wedding industry (that includes bridal registry).

In his show notes, Oscar de la Renta said, “Every woman dreams of that day. You have to go the extra mile and fulfill that dream to make something that a woman will fall in love with.”

Living up to that sentiment, the designer presented 23 styles, including the unexpected pink tulle gown with ivory silk organza flower appliqué and lace embroidery. A few flower girls wearing de la Renta dresses were also part of the show lineup. Those who read the fine print of his show notes learned that even the nail polish was Flirt by Oscar de la Renta. Guests also left with a Something Blue candle scented with the designer’s newest fragrance.

Kleinfeld owner Mara Urshel noted that upscale brides in New York, Los Angeles and Chicago, where big weddings are still the norm, have buoyed the estimated $25 to $30 billion in wedding gown sales. Her customers are gravitating to dresses by Isaac Mizrahi, Dennis Basso, Pnina Tornai and Lazaro. All in all, Urshel was encouraged by last week’s shows. “I left market very excited and enthused. There were so many new, lighter looks that are more modern.”

To try to appeal to brides in search of two dresses, Lela Rose presented what she called “tulle toppers,” designed to be worn over a wedding gown for the ceremony and then removed for the reception. “So many girls do this two-dress thing. But I think you originally chose your wedding dress because you fell in love with it,” she said. “Everyone loved the idea of giving them so many different ways to change a dress.”

While Rose’s designs have a trace of traditional gowns, she aims to make them more fashion-oriented to keep them modern and romantic. “Our customer tends to be pretty self-assured,” said Rose, adding that Web searches help fashion-minded shoppers to narrow their selections more quickly.

As a sign of her commitment to bridal, Alberta Ferretti recently unveiled her first boutique for the Alberta Ferretti Forever collection. Located on Via Belsiana in Rome near a charming courtyard next to a convent and the Santissima Trinità degli Spagnoli church at the beginning of Via Condotti, the store is in the heart of a busy shopping area. The 1,000-square-foot shop has such romantic details as fin de siècle armchairs, a mirrored closet and a wooden bedside table to keep wedding-day jewels.

In New York last week, Ferretti’s made-to-order bridal collection was launched with 23 styles wholesaling from $1,820 to $5,200. Noting that many stores sell 350 to 500 wedding gowns a season, Aeffe USA president Michelle Stein said bridal is a category with great appeal for many. The Ferretti wedding gowns will be sold through 25 specialty stores and two or three e-commerce sites in North America. While online shoppers often take on the task of dealing with alterations themselves, brick-and-mortar shoppers have the benefits of personal service, “hand-holding” during the alterations process and the psychological support that often goes with dealing with brides.

When J.Mendel relocates to a larger Madison Avenue location this fall, the boutique will have a designated area for bridal. All in all, Gilles Mendel spoke favorably of how the Internet is helping wedding gown sales. He said, “E-commerce has completely changed the accessibility of luxury bridal. Now women can choose from a far greater selection of high-end designer wedding gowns, no matter where they live — an exciting prospect for any bride.”

As much as technology has advanced, there still are some fool-proof basics brides need to keep in mind. Marchesa’s Georgina Chapman and Keren Craig suggested brides bring someone who they trust and whose taste they admire when they go shopping. Taking photographs of potential wedding gowns is another essential, they said. And brides-to-be need not worry about changing their minds to make last minute tweaks. “We expect it. It’s part of the process,” Craig said.