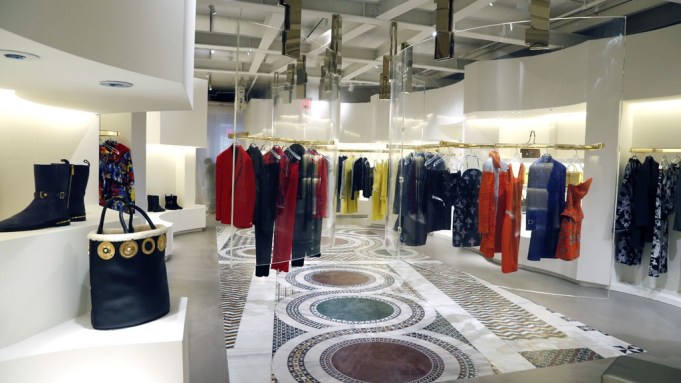 MILAN — Exports are turning into the Italian fashion industry’s saving grace more and more, as sales outside Italy are expected to reach the highest level ever in value in 2013.

Also of note is the fact that exports are increasingly shifting toward emerging countries and, for the first time, sales outside the European Union will overtake those within that area.

In the first nine months of 2012, exports to Brazil, Russia, India and China gained 13.4 percent compared with growth of 1.2 percent in the rest of the world. According to Fashion Economic Trends, a study distributed by Italy’s Chamber of Fashion, in 2013 exports are expected to grow 2.2 percent to 44.3 billion euros, or $60 billion at current exchange, while industry revenues are expected to drop 3.5 percent to 58.2 billion euros, or $78.5 billion.

“This [is] on condition that the new government will immediately put in motion measures to limit fiscal pressure,” said the study. If not, sales could show a double-digit drop. Preliminary 2012 industry sales showed a 5.4 percent decrease to 60.3 billion euros, or $81.3 billion.

Elections in the country are slated for Feb. 24 and 25, toward the end of Milan Fashion Week, which kicks off on Feb. 20 with Gucci and wraps up on Feb. 25 with the Giorgio Armani show. The elections present an additional variable for fashion executives facing reduced consumer spending, widespread unemployment and a lackluster economy.

While not putting the spotlight on politics, it “can’t be overlooked,” said Massimo Ferretti, executive chairman of Aeffe SpA, which controls the Alberta Ferretti, Moschino and Pollini brands and produces and distributes collections for Cacharel and Cédric Charlier. “We can survive with bad political management, but with a correct one, we can do better.”

Ferretti has been increasingly internationalizing and rejuvenating the group, which posted revenues of 254 million euros, or $325.1 million at average exchange, last year, with a 14 percent jump in the last quarter of 2012. “The year did not start well but ended on a positive note, with signals that make us hope for the rest of 2013,” he said.

During Milan Fashion Week, on Feb. 23, the company will stage an exhibition, “Unpacking 60 years of Pollini,” an installation by the brand’s creative director, Nicholas Kirkwood. Besides its own namesake brand, Pollini produces accessories for the Aeffe labels, including Emanuel Ungaro, the group’s most recent agreement, inked in September with the brand’s owner Asim Abdullah. Aeffe tapped Fausto Puglisi to design the brand and the first show will take place in Paris on March 4.

“The bank’s reduced credit to companies and a high fiscal pressure are not favorable to business. The sooner this is solved, the better it is, and it will help kick off economic growth, as companies are penalized by crimped consumer spending and stocked merchandise,” said Brozzetti.

The executive touted double-digit growth in 2012, led by retail and exports, which accounted for 80 percent of business. While Southern Europe, Italy and Greece suffered, Eastern Europe, the Middle East, the U.S. and especially Asia continued to grow, he said. Last year, the company added 38 stores globally, reaching a total of 168 and entering new markets, including India.

Retail expansion around the world will continue in 2013, with a Just Cavalli store set to open on New York’s Broadway in the spring, for example. Collections for Just Cavalli under a new licensing agreement with Staff International bowed last year, and a fragrance with Coty for this brand is rolling out in 2013. The firm is also strengthening its home division, and after the opening of Cavalli Clubs in Beirut and New Delhi last year, one venue will be inaugurated in Miami in the spring or summer, and in Saint-Tropez, near the designer’s renovated boutique — Cavalli’s first, which opened in 1972.

Salvatore Ferragamo SpA closed 2012 on an upward trajectory, with revenues of 1.15 billion euros, or $1.47 billion, up 17 percent compared with the previous year. Asia-Pacific continued to be the Florence-based group’s core market, but chairman Ferruccio Ferragamo said all geographic areas “responded well” to the brand.

“Historically, in moments of crisis, we grow more,” he said, citing the timeless nature of the product as one of the drivers.

The company, which successfully went public two years ago, plans to further expand around the world in 2013.

“There are new and important potential areas for business,” he said.

Asked about reported increases in prices, Ferragamo said, “A strong euro doesn’t help us as we produce entirely in Italy and production costs are in euros. We can’t control that, and hedging helps in the medium-term, but we have been obliged to fine-tune prices with increases of between 2 and 4 percent.”

That said, he underscored that Ferragamo is “not positioned” above competitors and aims not to penalize tourists or customers.

Versace group ceo Gian Giacomo Ferraris was also upbeat about prospects, capitalizing on investments made over the past few seasons in its production platform in Novara, Italy; in retail, including online, and in the expansion into new markets such as Turkey, Japan, Brazil and Korea, as a basis for future growth.

The executive said growth in 2012 was led by retail and, after SoHo’s boutique last year, Versace’s new store concept will be introduced in Paris at the end of March or early April and in Rome in June or July.

Last year, Donatella Versace set a new course for Versus as a nonseasonal collection with a strong digital component and created by several designers. Ferraris confirmed a Versus capsule collection by J.W. Anderson will be presented in New York in April.