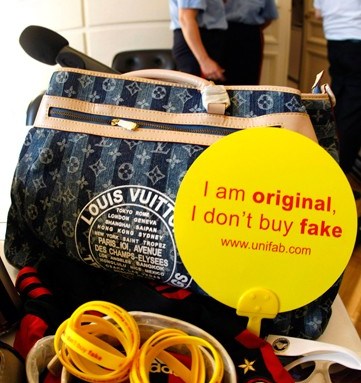 WASHINGTON — As quickly as they’re seized, more flood the market.

Counterfeit products are benefiting from the economy’s woes as consumers still try to flaunt a well-known brand but are perhaps no longer able to afford the real thing, while the criminal element, including terrorists, seeks to generate ever more funds by moving into the counterfeiting business. The result is that, even as federal and local governments crack down harder on fake goods, the activity is increasing at a record rate.

The flood of counterfeit goods into the U.S., mostly from China, costs legitimate businesses an estimated $250 billion a year in lost revenues and is responsible for the loss of 750,000 jobs annually, according to the International AntiCounterfeiting Coalition. In fiscal year 2009, U.S. Customs & Border Protection seized $260.7 million of fake merchandise. Shoes are the most common counterfeit product, accounting for 38 percent of infringing goods seized, but handbags, watches, jewelry, sunglasses, perfumes, pharmaceuticals and other consumer goods continue to be knocked off at alarming rates, according to the most recent figures from Customs.

Luxury brands’ counterfeit problems have escalated even as statistics from Customs & Border Protection reveal a slight decline in seizures. The value of goods seized in 2009 dropped 4 percent to $260.7 million from $272.7 million in 2008, and the number of seizures declined 1 percent to 14,841 in 2009.

However, the drop in seizures doesn’t necessarily represent a decrease in the amount of fake goods being sold because savvy counterfeit rings have adapted their distribution patterns and shipping methods to avoid detection, said Harley Lewin, an intellectual property lawyer and a partner with New Jersey-based McCarter & English, who appears in an upcoming CNBC program “Crime Inc.: Counterfeit Goods,” which will be shown Wednesday at 9 p.m. and hosted by Carl Quintanilla.

“The problem hasn’t diminished at all, but it has shifted,” said Bob Barchiesi, president of the International AntiCounterfeiting Coalition.

Sales of counterfeit products have moved out of traditional brick-and-mortar locations like Canal Street in New York and Santee Alley in Los Angeles to direct-to-consumer Internet sales and smaller, mobile operations.

Top luxury apparel and accessories companies have spent millions of dollars fighting the rising tide of fake goods that put their brand integrity at risk, but highly adaptable and difficult-to-prosecute counterfeiters continue to make big money knocking off top brands. In the last three months alone, there have been several high-profile cases involving counterfeits:

• In one of the largest luxury counterfeit-goods prosecutions in U.S. history, a federal jury in Richmond, Va., in May found two New York importers guilty of trafficking in counterfeits. The case involved more than $100 million of fake goods bearing labels such as Burberry, Louis Vuitton, Gucci, Coach, Fendi and Chanel. The defendants, Chong Lam and Siu Yung Chan, are alleged to have imported more than 300,000 counterfeit goods into the U.S. from China.

• Coach Inc. sued the City of Chicago in May, alleging that vendors at a city-controlled street fair were selling fake Coach products. Coach is seeking $2 million per trademark infringed.

• Versace SpA won $20 million in damages in a seven-year counterfeiting lawsuit against dozens of defendants. The case resulted in seizures at 72 stores in southern California and Arizona.

• Gucci America Inc. is continuing to pursue an alleged counterfeiter, Curveal Fashion, through the courts in a year-old case. It won a $13.7 million default judgment last January.

• Immigration and Customs Enforcement seized more than $260 million of counterfeit apparel, accessories and other goods in April alone, a record month for counterfeit enforcement.

“If you’re a luxury brand and you don’t think you’re being counterfeited, you’re living in a cave,” said Lewin. “It’s a constant fight.”

Quintanilla told WWD, “The business of counterfeit goods is booming in ways that would make corporate America jealous — huge percentage gains in seized goods for the past 10 years, which has law enforcement stepping up. Plus, in a weak economy consumers may be looking to get a bargain and, as this documentary shows, they need to be very careful of that.”

The show’s cameras followed LAPD officers on two undercover busts of counterfeit purveyors selling fake Louis Vuitton and Coach handbags, luggage and shoes out of a small storage unit, and counterfeit Tiffany jewelry being sold out of the back of a car.

Criminals importing counterfeit goods into the U.S. are savvier about avoiding inspections, said Therese Randazzo, director of intellectual property rights for Customs. The agency’s seizures of counterfeit products increased 475 percent in less than 10 years, she said, but now counterfeiters send smaller shipments of goods through express carriers or the U.S. Postal Service to avoid detection. Web sites that sell directly to consumers have also made counterfeiters’ lives easier by shortening the path between the consumer and the counterfeiter, Randazzo told “Crime Inc.”

Law enforcement and government officials are also concerned with the rise of health and safety and national security risks inherent in the underground counterfeit system.

Counterfeit handbags that test high for lead, and fake shampoos with high levels of bacteria in them have been found, he said.

In addition, counterterrorism efforts after the attacks of Sept. 11, 2001, eliminated many of terrorists’ old, preferred ways of making and laundering money and forced them to find new avenues to fund their criminal activities. The rewards of selling high-margin counterfeit goods far outweigh the risks, which has made it a popular fund-raising focus for terrorists and organized crime rings. Prosecuting counterfeiters is difficult, and the penalties involved are significantly less than other crimes like selling drugs or weapons, experts pointed out.

“We need to start looking at those masterminds as very intelligent businessmen,” said Sharon Melzer, a criminologist at American University in Washington. “They make choices where they can maximize their profit, but also have the least amount of worry about being detected and being punished. The more rational choice is to pick counterfeits.”