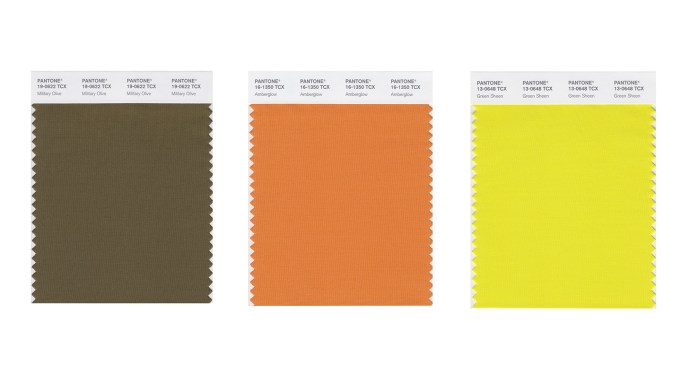 The top-ranked Amber Glow will be a welcome sight to Hermes’ board of directors, and Samba already got a global boost, thanks to Shakira’s Peter-Dundas designed ensemble during Sunday’s Super Bowl LIV Halftime Show.

But this time around rankings seem to be more of a footnote, with the emphasis being on a try-it-all mind-set.

She explained, “Rather than saying to them, ‘No, this is it — here are the five top colors — end of story.’ That is, I feel, far too dogmatic. I want them to reach out further than that, because people do have to feel comfortable in what they wear. You also have to give them permission to experiment a bit.”

Starting with the warm tones, which “are set off by the cool of Classic Blue,” Eiseman expects people to be more inclined to dabble in different hues. Shoppers also have the safety net of falling back into four core neutrals — the ivory-like Almond Oil, rich Blue Depth, reliable Sleet and transferable Military Olive. “Hopefully, they will be experimental but they still have the option of going back to what makes them feel most comfortable,” she said. “I think this entire palette contains colors that allows them to do both.”

Whether inventive or conservative, both camps have plenty of long-lasting color options to choose from, and to layer into their wardrobes for seasons to come. Just as re-commerce, upcycling, secondhand shopping and sustainability will only become more ingrained, Pantone is counting on color choices to have multiple lives. When it comes to self-expression, it all works from its point of view. And Instagram-minded consumers and designers aren’t the only ones looking to stand out with a shot of color — architects, restaurant owners and developers are also giving their palettes extra attention.

Amberglow 16-1350: This confidence-building autumnal color may hark back to tradition, but its prominence proves that orange has never been more accepted by consumers, Eiseman noted. For fall, this one is always a safe bet. Todd Snyder is a believer. But Amberglow isn’t only for pumpkin season. More daring was the custom Louis Vuitton gown that Michelle Williams wore to last month’s 77th annual Golden Globe Awards. Ditto for Kathryn Newton’s gown at the SAG Awards.

Samba 19-1662: This is one amped-up, energized red, as any of the 103 million-plus viewers who caught the first part of Shakira’s Super Bowl LIV Halftime Show performance can attest. Samba was the shade of her Swarovski-ized, Peter Dundas-designed ensemble, as well as the color of choice worn by her back-up dancers. Reds are still going strong, with this empowerment color carrying forward after Flame Scarlet topped Pantone’s color report last season.

Sandstone 16-1328: Grounded and outdoorsy, this color can be found all over brands like Columbia Sportswear and Patagonia, since it speaks to all things rustic. With the average person spending 90 percent of their time indoors — and many in cities — there is an increased yearning for the great outdoors. Noting how urbanites are increasingly encouraged to take a walk in the park to breathe in the fresh air, Eiseman said, “That’s very much a part of where people’s heads are.” Surprisingly, Sandstone also has red-carpet appeal, as evidenced by Maria Grazia Chiuri’s recent Dior couture show, and the body-hugging Thierry Mugler dress that Kim Kardashian wore to last year’s Met Gala. Cinq à Sept worked Sandstone into its “Power-full” mood board.

Classic Blue 19-4052: Aside from being Pantone’s 2020 “Color of the Year,” this soothing shade is reminiscent of the sky at twilight. For a few seasons, people have been gravitating toward Classic Blue, Eiseman said. Along with a sense of optimism, it also symbolizes the possibilities of what lies beyond. Consumers’ fascination with outer space has only been heightened by news coverage of the now-assembled James Webb Space Telescope that will launch in 2021, Eiseman said. Clare Waight Keller’s recent Givenchy couture show featured a standout strapless dress and elaborate hat in Classic Blue. Jean Paul Gaultier took his final bow in the fashion orbit wearing a Classic Blue jumpsuit.

Green Sheen 13-0648: Love it or hate it, Green Sheen has a not-to-be-missed acidic twinge. Undoubtedly this one is a surprise for fall. But given the heft of the ath-leisure market (which is expected to grow to more than $122.6 billion by 2023,) and the vibrant colors infused throughout all those athletic brands, the strength of Green Sheen is not such a stretch. It also works at night as Billie Eilish proved in Gucci at the Grammys, and Winnie Harlow did in a Ralph & Russo gown recently on the runway. Maison Margiela also used Green Sheen for an added runway pop.

Rose Tan 16-1511: The dusty pink is flattering for a variety of skin tones including deeper ones, according to Eiseman, who noted this “very composed color is really something that offers a little bit more.” Beauty executives don’t need reminding what a winner Rose Tan is, nor do innerwear designers. It also offers a restful quality, and first-time users are apt to be repeat performers, understanding upon closer reflection how “that pink does something for me.” Scarlett Johansson and Renée Zellweger agreed, having sported a feathery Versace gown and a Prada dress, respectively, to the BAFTAs. Gucci also worked it into its men’s show.

Ultramarine Green 18-5338: This take-a-deep-breath kind of color is “very poised and self-assured,” according to Eiseman. Retailers and developers are increasingly incorporating greenery and trees into shopping centers to give shoppers a little room to grow. This confidence-boosting color has also cropped up on the red carpet lately. “Little Women” director Greta Gerwig wore an Ultramarine Green velvet gown to the BAFTAs, as did Daisy Ridley in an Oscar de la Renta gown in this deep forest.

Fired Brick 19-1337: Sturdy and grounded, this relatable color is ambidextrous. Consumers and designers alike can use it as a base color or as an accent. British designer Craig Green added Fired Brick to his recent men’s wear collection. Ditto for Jonathan Anderson’s latest men’s wear collection at Loewe. Viktor + Rolf’s Viktor Horsting and Rolf Snoeren were on board with the trend, working it into a calico gown for an opening look. Beyonce added some Fired Brick-colored items to her Ivy Park collection for Adidas.

Peach Nougat 14-1220: A variant of Rose Tan, this peachier version is flattering and warm. Indicative of its versatility, Peach Nougat could be seen on Anderson’s recent Loewe runway, as well as Zuhair Murad’s spring 2020 couture collection and Valentino’s 2020 resort one. Momofuku founder and chef David Chang is such a fan that he named his new Hudson Yards outpost Peach Mart. Eiseman confirmed that the culinary appeal of Peach Nougat is part of the color’s appeal to the fashion crowd.

Magenta Purple 19-2428: This wonderful mixing color is one that people tend to really adapt to and appreciate after giving it a try, Eiseman said. “Bombshell” actress Charlize Theron took this hue up a notch in an ethereal strapless Dior gown at this year’s BAFTAs. Striking as that look was, this more manageable Magenta Purple offers a versatility that will make consumers hold onto it for more than a season or two, according to Eiseman. Valentino’s Pierpaolo Piccioli used this luxe and sophisticated tone for a collar to ramp up an evening look.

Almond Oil 12-0713: With an inherent warmth that takes it more in the crème direction, this subtle classic “doesn’t necessarily mean the same ole neutral,” Eiseman said. Suitable for day or night, work or play, winter or summer, Almond Oil does it all. The name may hint at the burgeoning wellness category, which Market Research Future expects to hit $520 billion by 2023. Almond Oil already translates to eveningwear — Lizzo chose a Versace gown in the color for this year’s Grammys and Kate Middleton pulled an Alexander McQueen one from her closet for the BAFTAs. It was also the color of choice for Billy Porter’s Alex Vinash tuxedo with a zip-off feather train at the Golden Globes.

Blue Depths 19-3940: “Not another navy,” by Eiseman’s standards, this deep tone is a bit mysterious. Giorgio Armani tapped into Blue Depths for his Armani Privee collection. Thom Browne is another advocate. Nicholas Braun went with a Blue Depth Prada suit for this year’s Golden Globes.

Sleet 16-3916: Longevity is gaining acceptance, thanks to environmentally minded resellers and recyclers. Sleet delivers its own timelessness — a solid choice that is always dependable and everlasting, Eiseman said. Traces of Sleet could be found on the men’s wear runways at Dior, A-Cold-Wall, Salvatore Ferragamo and Rick Owens. Ironically, this form of gray never grows old. And it is so solid that it meets a lot of needs, Eiseman said. Case in point — Ariana Grande’s Giambattista Valli over-the-top haute couture gown for the Grammys.

Military Olive 19-0622: Strong and interchangeable, this color can provide a foundation for any outfit. Designers Martine Rose and Dries Van Noten are fans. This adaptable color can easily be mixed with many others, Eiseman said. The name, however, is not a sign of any military conflicts but indicative of the color’s depth.