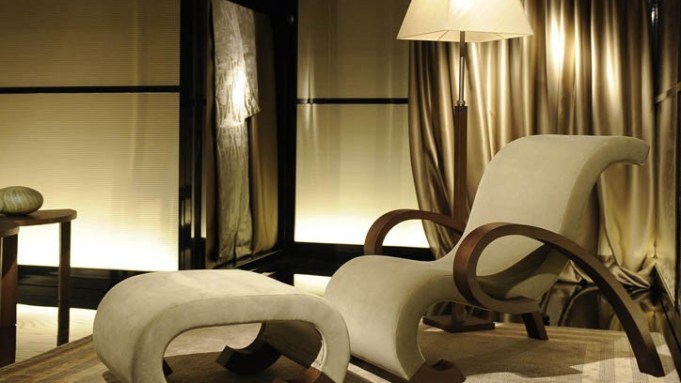 MILAN — Home collections have been among the bright spots in the recession-plagued fashion and luxury goods worlds, so it’s no surprise brands were keen to piggyback on the international Salone Internazionale del Mobile fair this year in the hopes of luring consumers to buy more fashion, not just furniture. The six-day show ends here today.

Max Mara, Roberto Cavalli, Tod’s, Dsquared, Blumarine and Moncler were among the companies that registered sales increases in their stores when they lent their spaces for parties related to the Salone. A Max Mara spokesman said during the three main days of the fair, the flagship’s sales were the highest of the year. Over at the Roberto Cavalli boutique, which served as a backdrop for modern, yet opulent, chandeliers by German-based Windfall, sales assistants hastily replaced printed or tiered cocktail dresses as they were stripped from the mannequins by eager shoppers.

Favored by sunshine and mild temperatures, about 500,000 visitors filled Milan for the fair, giving the city an injection of optimism. Bars and restaurants bustled with activity while the city center was packed with visitors attending the large number of free events.

Here, a look at what some of the major fashion houses offered at this year’s fair.

Dark green stood out among the new colors, and novelties included understated lizard-skin or crocodile prints in leather or velvet, and the use of the South American Santos Palisander wood, either shiny or opaque.

The designer’s limited edition, handmade pieces — including a desk dipped in 24-karat gold — were also new.

Fabrice Gouffran, director of the company’s home and hotel division, said sales of the Casa line last year grew 10 percent to 40 million euros, or $58.8 million, at average exchange rates. “The U.S. market has been more impacted [by the global economy] than Europe, and Asia is holding up,” said Gouffran. A Casa store will open in Chengdu, China, by the end of the year. There are 81 Casa spaces and 51 shop-in-shops around the world.

Gouffran also unveiled a new license with Rubelli SpA for the production of home fabrics. The Casa collection shown at the Salone featured 30 new pieces of furniture, 60 accessories, 21 new patterns in more than 30 colors and eight limited edition pieces.

As for Armani’s hotels, Gouffran confirmed the opening in Dubai has been pushed back to 2010, and Milan will open in early 2011. A resort in Marrakech will be unveiled in 2012; Armani Residences, in Marassi, Egypt, will also be available that year. New York, London and Paris are next on the priority list, said Gouffran, adding Armani-designed private homes have just been finished in Saint-Tropez, Moscow, Singapore, London and Portland, Ore.

VERSACE HOME: Versace unveiled the three-tiered Ninfa chaise longue in platinum-finished crystal and upholstered with silk or full-grain leather. “Innovate and experiment, these are our priorities, and we compare ourselves to other design companies, not other fashion brands,” said chief executive officer Giancarlo di Risio, underscoring the continuing growth of Versace’s home line, which reported sales in 2008 of 75.9 million euros, or $111.5 million, up 9.3 percent. “We were the first to work with ceramic, and last year we introduced titanium-made designs. This year, crystal is our star element — material research is pivotal for us,” said di Risio. On the more commercial side were velvet sofas, strewn with new pastel-colored leather pillows, and settees upholstered with prints by artist Julie Verhoeven, who collaborated with Donatella Versace on the spring ready-to-wear collection. Dedicated home stores will open in Jakarta and Dubai this year.

MISSONI: Missoni’s first hotel, operated by the Rezidor Hotel Group, is scheduled to open at the end of May in Edinburgh, followed by one in Kuwait City. In creating a garden for the latter and adapting it to the climate, Rosita Missoni turned to cacti and their sculptural shapes for a new colorful print she presented in Milan on soft and oversize pillows displayed on polyethylene, rotating bean-shaped seats in acid green or purple. “The hotel business is useful to focus on, and we get to think about pool, lounge areas and resort spaces,” said Missoni. Next up, Missoni, who owns a Venetian freight boat called “Burcio,” said she would like to develop interior design for boats.

DIESEL: The furniture and lamps, licensed to the Italian companies Moroso and Foscarini, respectively, appeared in the brand’s typical rock ’n’ roll and relaxed mood. Among the standouts: a cabinet inspired by the travel case used by musicians to carry their instruments on tour, a studded stool, glass tables where a DJ console or a stingray (visible as in an X-ray) are visible and wood chairs and tables painted with a vintage treatment. Linen lamps featured denimlike stitching or were shaded as microphones. “The light is the first thing that adds atmosphere — in my home, as well,” said Diesel ceo Renzo Rosso. Home linens produced by Zucchi feature stud prints or reference the music world. Rosso said he expects the business to reach sales of 30 million euros, or $39.1 million, by 2010.

FENDI: Linearity continued to be the mantra at Fendi, with a slew of sofas upholstered in soft crocodile, full-grain leather dusted with gold or pearlized treatments, chenille, silk or satin. Leather was also embossed with a relief motif reminiscent of the facets of precious stones. Fox and mink cushions were scattered around, as were glass vases and lamps handblown in Venice.

TRUSSARDI 1911: For the house’s first furniture collection, Milan Vukmirovic infused a rich and textured feel into the minimal furniture. Standouts included graphic coffee tables made from large-vein marble and framed with matte brass oxidized for 20 days. The same base framed leather or velvet couches available in a rainbow of shades, including neutrals.

ERMANNO SCERVINO: The launch of the company’s first furniture and linens collection was inspired by the designer’s African vacations, namely to Kenya. Sofas, chairs and a canopy bed were covered or embellished with crocheted raffia in black or natural. Similarly, a raffia armchair had legs made of horns of zebu cow. The furniture is produced under license by Nicoletti.

ETRO: Etro teamed up with Kartell to produce a clear armchair with a Tropicana printed cushion in a dusty rose, salmon pink and pale blue. Installed in its flagship, it was used as a prop for a male mannequin clad in an embroidered shirt and jeans, silver flute in hand, and a female partner wearing a silk embroidered camisole and printed pants.

MOSCHINO: A life-size Barbie exuded full-on glamour, clad in archival Moschino looks, as she played the hostess of her new “dream house,” created by Kartell.