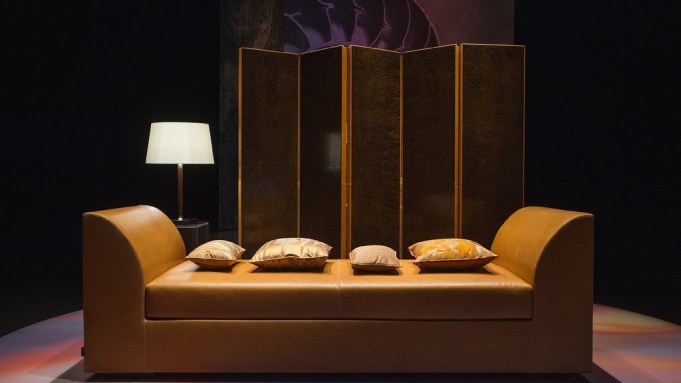 Just how relevant home collections have become for fashion brands was shown by the fact that more of them than ever showed at the fairgrounds during Salone del Mobile in Milan, which closed Sunday, while those designers showing outside the fair continued to expand their collections. All the lines mirrored the labels’ most luxurious — and extreme — runway looks. There were strips of electric blue fur for pillows at Fendi; emerald green velvet chairs from Versace; patchwork ponyskin carpets from Roberto Cavalli, and giant sunflower prints at Missoni.

Giorgio Armani put the spotlight on the use of eco-friendly materials this season, such as the Japanese ash wood tamo; coconut, or striped banana tree finishes, which are not commonly employed, he noted during a walk-through of the new Armani/Casa collection at his Tadao Ando-designed theater. Softly lit, the display included a new armoire inspired by old trunks in tamo and brown soft leather-covered trim; a table with a Mexican onyx surface in warm orange tones, and stackable tables made with carbonized coconut shells — blending craftsmanship and contemporary design.

While an Art Deco reference runs through the pieces, Armani shied away from nostalgia, pointing out that the collection is functional “to live in the future” and not to look back “on memories of a past that no longer exists.”

The designer said clients and customers “every year want to see a substantial body of work, not just pieces. The biggest compliment is when somebody tells me this is something that remains and that there is thought behind it” versus what he sees as “special effects that disappear after the Salone.”

The Macka residences in Istanbul designed and furnished by Armani were unveiled in December. A new real estate project was signed in early 2013 for New Delhi, a second such venture in India, said Armani, who is also putting the finishing touches to luxury apartments in Marassi, Egypt. Armani Hotels opened in Dubai and Milan in 2010 and 2011, respectively.

RELATED STORY: Around and About at Milan Design Week >>

At Fendi, Pietro Beccari, the company’s chief executive officer, said, “Our customers don’t just wear Fendi — increasingly it’s a lifestyle. And they want to know there is a history of craftsmanship behind what they are buying.” Hence the leather belt and buckle details and stitching on sofas that nod to Fendi’s skills as a saddle-maker, and the lavish fur pillows with pops of bright color mirroring Karl Lagerfeld’s latest creations for the brand.

Last year, the company introduced Fendi Casa Contemporary, a more minimal, streamlined collection aimed at a younger clientele — what Beccari referred to as the children of Fendi’s traditional clients. This year, the collection was designed by the French architect Toan Nguyen. Beccari said that in early June he would unveil a “very big” design collaboration for the Fendi Casa Contemporary brand. He declined to provide further details.

Even before the Contemporary line was introduced, Fendi Casa — which launched 27 years ago — was thriving. The collection is produced under license by the Forlì, Italy-based firm Club House Italia and accounts for about 80 percent of that company’s sales. Club House Italia, which also makes home collections for Kenzo and Bentley, had sales of 72 million euros, or $94 million, in 2012, a 5 percent increase over the previous year.

Despite its longevity, there is still enormous room for growth at Fendi Casa, said Alberto Vignatelli, the founder of Club House Italia.

“Fendi Casa’s greatest problem is also its greatest asset — it doesn’t have enough visibility worldwide,” he said during an interview at the fair. “Customers who know Fendi often don’t know where to buy the home collection, so our aim is to give it greater visibility.” Beccari said that the newest Fendi stores will be decorated with the brand’s carpets and some furniture, while a 13,000-square-foot showroom — featuring Club House Italia’s other brands — is set to open on Madison Avenue in New York in July.

At the fairgrounds for the first time, Versace showcased a collection that was every gilded inch of the brand. It featured sofas adorned with thick baroque swirls of gold wood; leather chairs with shiny gold buckles, and a desk set fit for the Wizard of Oz — emerald green velvet chairs embossed with a swirling print and matching leather desktop.

A champion of young talent, Donatella Versace was drawn by Los Angeles-based artists and designers Nikolai and Simon Haas, who created a 12-piece collection for Versace Home. Standouts are the Donatella Chair made from honeycomb brass with black leather upholstery; the Stud Club armchair, and the Bondage Bench inspired by Gianni Versace’s 1992 collection, with strips of black leather intertwining on the seat.

“I first saw a vase they designed that wowed me,” said an upbeat Donatella Versace during an event to present the collection at the company’s Milan Via Gesù headquarters. “It’s the first time I work with other designers for our home collection and they succeeded in marrying our heritage with the present.”

“It was important for us to interpret the purest elements of the Versace brand in order to create something completely new and unusual and blur the lines with fashion,” said Nikolai Haas, adding that the goal was to transfer Donatella Versace’s personality to their pieces. “We wanted these designs to have her sensuousness and boldness, and to command the room, just as she does.”

Roberto Cavalli’s offer was equally in sync with his fashion looks, and featured dining room tables covered in calfskin that was printed to look like alligator; sparkly leopard print or patchwork ponyskin wallpaper; fox fur throws and pillows, and shiny cabinets and bureaus with fat, round gold handles. The designer also staged an installation called “Gold, Excess and Love” at Milan’s Spazio Edit, showing gold versions of some of his main pieces. “I wanted to make them gold because they have to stand out, they have to be special,” said Cavalli, adding that he is negotiating with a Chinese entrepreneur to design two towers with a shopping mall, and a Roberto Cavalli Club and Café in Chengdu, China.

While not as flashy, Missoni went wild with prints — covering low sofas, giant globe lamps and rugs in an oversize sunflower print with muted, earthy colors such as cornflower blue, heather, mauve and dusty rose. There were also the brand’s signature zigzag prints — in a similar color palette.

Rosita Missoni, who helms the home division, characterized her efforts as “a melting pot, a flow of ideas,” as she believes the collections never start and end. “You pick up from the last.” One item Missoni was particularly proud of was a knitwear-covered chair — complete with patches on the elbow rests. “Ideally, I would love the concept of a white, Japanese-style tatami house…but probably just because it offers spaces I can quickly fill with colors,” she said with a smile.

A Missoni hotel on Mauritius is in the works, following previous openings in Edinburgh and Kuwait City, while a unit in Oman has been stalled, said the designer. Her brother, Alberto Jelmini, said Missoni Home has sales of around 20 million euros, or $26.2 million, accounting for 70 percent of revenues of T&J Vestor, which produces the line. Italy now accounts for 20 percent of sales, while it represented 60 percent five years ago.

Diesel — a brand that loves an ironic twist — showed off cabinets with doors and handles that looked just like the compartments where food and drinks are stored on an airplane, and a cabinet door covered in a photo of a rundown, high-rise apartment building. A sofa was covered in a jacquard fabric meant to look like wrinkled stripes, while beds were covered in duvets bearing photographic prints of fur.

Prada’s exhibition space on Milan’s Via Fogazzaro served as a backdrop to the futuristic, high-performance furniture collection Tools for Life made by OMA, cofounded in 1975 by Dutch architect Rem Koolhaas, for Knoll Inc., which marks its 75th anniversary this year. The pieces were previewed during Prada’s fall men’s show in January. “We surrounded the seating with the house, and the questions on how to inhabit it, while experimenting and keeping the energy in design [arose],” said Koolhaas. “We wanted to create a range of furniture that performs in a very precise way but also in completely unpredictable ways, furniture that not only contributes to the interior but also to the animation.”

The signature piece was the 04 Counter, a stack of three horizontal bars that the user can rotate and transform into a series of shelves and cantilevered benches, all in concrete, leather and patterned wood. Also of note were round tables in travertine or with an acrylic top and aluminum base powered by an electric motor that can be adjusted in height to accommodate seating or standing.

At its Via Montenapoleone boutique, Louis Vuitton presented Object Nomades, the line of transportable objects that was launched at the latest edition of Miami Art Basel. It includes pieces by Marteen Bass; Fernando and Humberto Campana, and Nendo.

At the historical Palazzo Liberty, Hermès presented Les Nécessaires d’Hermès, a collection of eight luxury yet functional furniture pieces conceived by French designer Philippe Nigro. “It was my first time working with Hermès, which gave me carte blanche,” said Nigro. One item was Groom, a multifunctional clothing track in exclusive Canaletto walnut wood.

Antonio Marras unveiled a line of carpets and wallpaper in the atmosphere of his picturesque Circolo Marras. Paying homage to his native Sardinia, Marras collaborated with Oristano-based Bentu Srl on a collection of hand-woven black and white carpets, featuring repeated and mirrored motifs. The designer let his imagination run free, as he presented wallpaper produced by Italian company Wall&Decò with giant flowers that seemed sketched on the ruled page of a vintage notebook.

“As I was shaping wax for my jewelry line, I had the idea of crafting objects I could place in my home,” she said. In collaboration with Fonderia Artistica Battaglia, Milan’s storied foundry that has over the years realized the art works of important artists such as Arnaldo Pomodoro and Giuseppe Penone, Visconti created one-of-a-kind vases, plates and candleholders in bronze, as well as a range of silver cutlery, all featuring flowerlike, organic shapes.