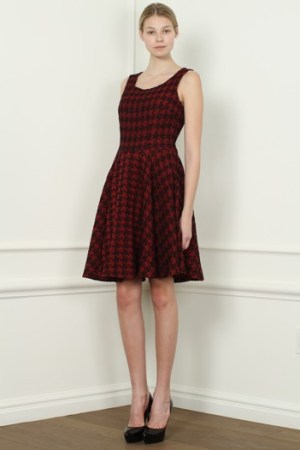 Not everyone in the contemporary market is angling for the youth vote. Meet Ammara Yaqub and her new collection Ammara, which, launching for fall, targets a more mature customer at a lower price point. It’s a look she describes as “refined contemporary.”

“I felt there was a void in the marketplace,” says Yaqub, 31. “You go to the contemporary floors and there’s great stuff to buy, but everything is skewed very young. You could go to the designer area, but you may not want to pay $2,000 for a dress.”

To that end, her line — which wholesales from $110 to $450 — works a decidedly pulled-together, sophisticated vibe à la Jackie O, one of Yaqub’s major style inspirations. There are trim coatdresses with Peter Pan collars and Fifties-style frocks, as well as easy tunics and pullovers, all cut from a variety of richly textured fabrics: pleated and nubby wools, ribbed knits and faux pony hair. “I have a love for fabrics,” Yaqub says. “If I use an expensive one, I’ll use it in a more simple silhouette, like a plain shift, to get the garment at the price point I want.” And she’s not afraid to admit that she’s also influenced by a few of her favorite designers — Balenciaga’s Nicolas Ghesquière, for one, gets name checked in a techno-stretch coat sans shoulder seaming, not to mention a spare LBD made from spongy Neoprene.

While Yaqub is focusing on comfort and fit — she notes that her clothes flatter “and forgive” a number of body types — she’s keeping hemlines relatively modest too. “Things are very short nowadays, and it’s a bit of a challenge for someone like me,” she says. “You know, it’s an easy alteration to shorten something, but not to lengthen it.”

Her design approach is particularly pragmatic, and for good reason: The Pakistan native has an M.B.A. from Harvard Business School, spent a stint as an investment banker for Merrill Lynch and was a buyer for Louis Vuitton (scarves, hats and ties) and Saks Fifth Avenue (fine jewelry and watches). She also worked briefly for Zac Posen in sales and merchandising. “A lot of times designers are projecting their viewpoint,” she says. “I have a very practical mind and I think that differentiates me. When you’re a business person, you’re able to say, ‘OK, while I would love to make this, it’s not going to sell.’ ”

And Yaqub’s business savvy surpasses the sartorial. Handling her branding strategy and logo is MODCo Creative’s Sara Rotman, who happens to be the brains behind Tory Burch’s famous double-T insignia. (Yaqub’s new logo features two A’s fit neatly into a square.) “One of the things that definitely works for the customer is to have an identification of what they’re buying,” notes Yaqub, pointing to Burch and Louis Vuitton as two prime examples. “And we know that companies with strong logos have really managed to become great businesses.” — V.L.