Ally Hilfiger and Nary Manivong introduce their collection on Feb. 11 at Milk Studios. 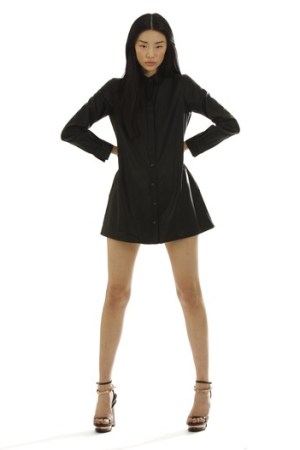 Rich girl, poor boy. The Hollywood motif takes a real-life turn in the relationship of Ally Hilfiger, she of the famous dad and infamous reality show, and Nary Manivong, he of his own fashion house and current hard-knocks fashion documentary.

They met in 2008, and are taking their friendship to the next level, professionally speaking, with the launch of NAHM, an advanced contemporary collection set to open on Feb. 11 with a presentation at Milk Studios. Manivong is putting on hold the solo collection he has designed since 2005 to collaborate with Hilfiger. The two first worked together when he asked her to style his show last year.

It speaks to the range of people who heed the call of fashion that a guy who once slept in an Ohio donut shop and the daughter of an industry giant can find reason to go into business together. Yet there’s more to the connective tissue than love of fashion — like Manivong, Hilfiger struggled to establish sound footing in her young adulthood. Unlike Manivong, her woes were not for want of resources and, for the record, she’s not looking for sympathy.

NAHM, the name a random fusion of the pair’s initials, is based on the shirtdress. On honing in on a single idea, the two got some expert advice, courtesy of Ally’s proud father, Tommy Hilfiger. “He said, ‘Diane von Furstenberg came up with the wrap dress; Ralph Lauren with his ties, then the polo shirt,’” she recalls. “So we said, ‘OK, let’s find what our focus might be.’ We were looking through my closet and I pulled out this shirtdress.”

Hilfiger loves the ease and versatility of the shirtdress, a shape that plays well into Manivong’s reputation for clothes that are feminine but not precious. The lineup they’ve developed is impressive, from pure classics to versions with variations such as color splicing and asymmetric hems. Fabrics range from silks to wool challis. The clothes will be produced in a Garment District factory owned by Teddy Sadaka, one of numerous investors in the business. NAHM has taken studio space in his building.

The designers have come to terms with working under the shadow of Tommy: “I can either look at it in a positive way or a negative way and I’ve looked at it both ways in the past,” Hilfiger says. “I’ve thought, I don’t want to be known as that. But you know what? This is who I am. I have a supportive father. I’m talented. He’s talented. It’s in my blood. So I am what I am.”

Neither is Manivong concerned with ceding his independent reputation to the Hilfiger name. “When I first asked her to work with me as a stylist, the first thing I told her was I don’t care about her last name,” he says. “She’s going to do this on her own. I think what people are going to take notice of is that she really does put the work into it.”

Manivong is about to experience a boost to his celebrity. “Dressed,” the David Swajeski documentary about the designer, opens on Friday, and was feted Wednesday night at a party at Housing Works. The film tells, at times cryptically, how Manivong overcame an abusive childhood and homelessness, ultimately finding his way to New York and a career in fashion.

Manivong retains some of the mystery in conversation. He recalls arriving in New York at 18 with $200 and an acute need for a job. He found one, at B&J Fabrics. “I got hired by Scott Cohen — he’s the owner — and the first words that came out of my mouth were, ‘Can I get some money right now?’ They gave me part of my first paycheck. I ended up staying there for six months. He was so supportive.”

Hilfiger experienced the downside of early fame while portraying herself somewhat frivolously on MTV’s “Rich Girls” in 2003. “I had a lot of trouble afterwards,” she acknowledges. “I was doing a lot of different things. I was an artist, I was a stylist, I was working full time. I mean, I burnt myself out because I was trying to prove myself so much.” Along the way she became wary of celebrity, knowing “what it can bring. I know how it can damage a family, friendships, a person.”

Today, she gives every indication of having moved on beautifully with intelligence and grace. “I’ve learned how to balance,” she explains. “I’m really into my health. I don’t drink or smoke or anything like that. Instead of trying to overcompensate and prove myself to people that I don’t even know or really care what they think — I mean, it’s none of their business — [what’s important now] is making my life whole.”

Along with an aesthetic, the designers claim to share a fierce work ethic and the ability to negotiate their way through creative differences. And, oh, yes: “Gratitude — also something we have in common,” Hilfiger adds. “I go over a gratitude list every night.”

Even on the lousy days?

“That’s what the gratitude list helps me with,” she coffers, with apparent conviction. “I have food, I have work, I have love, I have friends, I have feet, I have both feet. I don’t have to sleep on the streets — I mean, that alone. Everyday, no matter how sh–ty my day has been, there’s so much I have to be thankful for.”