Norman Ambrose, Tia Cibani and Cornelia Guest are among this year's winners. 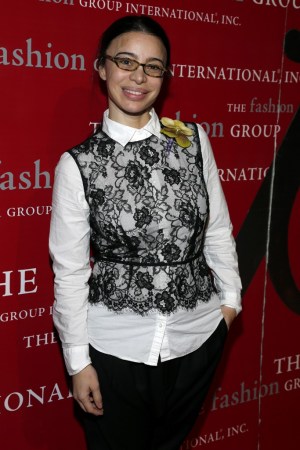 NEW YORK — “The only reason a problem occurs is to challenge you for solutions. If you see it as a defeat, you’re finished.”

So said Ralph Rucci, this year’s keynote speaker at Fashion Group International’s Rising Star Awards luncheon here Thursday. Rucci, who is marking 31 years in business, had a few such nuggets of advice on hand for the nominees. “If you’re passionate and remain with what was ignited with you, you will be a great success,” he said. “You can’t look left or right. Just look forward and keep your head down while working.”

The annual event, which took place at Cipriani 42nd Street, drew a crowd that included John Demsey, Mark Badgley and James Mischka, Steven Kolb, Graziano de Boni and Jeffry Aronsson, as well as several presenters like Linda Wells, Laura Slatkin, Michael Boodro, Terron Schaefer and Derek Lam. Paper Magazine’s Mickey Boardman, who was also a presenter, lightened up spirits considerably, and not just for his all-over sequined T-shirt. “Please hold all applause until the end, unless it’s for me,” he said while listing the accessories nominees.

Cornelia Guest, who won that award for her line of cruelty-free handbags, recalled her first meeting with Bloomingdale’s Francine Klein and Brooke Jaffe a year and a half ago. “They taught me what an SLG is,” she said.

Other winners were Hayley Barna and Katie Beauchamp of Birchbox for retail, Alexandra Mor for fine jewelry, and Tim Coppens for men’s wear. In beauty/fragrance, the corporate award went to the Estée Lauder Co. Inc.’s Alana Hawawini, while the entrepreneur prize was handed to Carlos Huber of Arquiste Parfumeur. The home/interior design trophy was given to Gustavo Carmona Muñoz of Materia Arquitectónica, while the inaugural Karen Harvey Business Innovator Award went to Meggan Crum and Mandy Tang of Therunthrough.com. “When we heard about this, there were major Eighties dance moves going on in our office,” Crum told the audience. “This is just one of the best days of our lives.”

The women’s ready-to-wear prize went to both Tia Cibani and Norman Ambrose. “It’s just an honor to be recognized as someone that exists as part of an industry, a field,” Ambrose said afterwards. “Also, to be selected among the many talented candidates and nominees and then to win unto itself is an honor.”

Cibani, for her part, was “surprised” and “blessed” to be a winner. She didn’t have too much time to celebrate the honor, though. “I have to go back to the office now for fittings.”