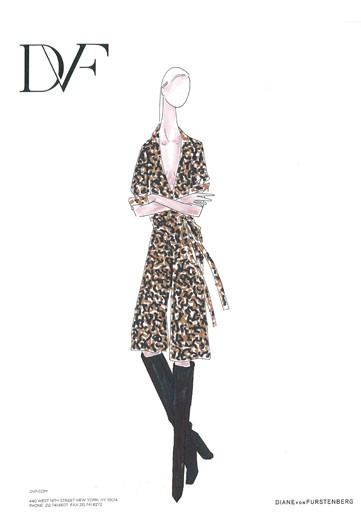 NEW YORK — Honeysuckle may be Pantone’s color of the year, but if leading fashion designers have their way, green will come out on top.

The Green Movement is getting a “haute” stamp of approval with the launch of Runway to Green, a fund-raising initiative with a runway show set to take place at Christie’s here during the auction house’s Bid to Save the Earth event on March 29. Net-a-porter.com is the exclusive online retailer for the launch.

The project is an evolution from 2008’s Runway to Change initiative, which was spearheaded by Sylvana Ward Durrett, director of special events at Vogue, and Luisana Mendoza, a former assistant to Vogue editor in chief Anna Wintour. At the time, they asked American designers to create items under $100 that ultimately raised about $3 million for the presidential campaign of Barack Obama.

“We felt Runway to [Change] was a great business model, and thought about ways that it could not only work politically, but also for humanitarian, philanthropic and environmental causes,” Ward Durrett said. “We thought it was time to change the status quo — that idea that organic and green somehow mean lesser value, with cheap-looking organic cottons that are less glamorous.”

The designers were asked to create a fashion piece as part of their fall 2011 collections, which didn’t necessarily have to be green. The designer firms instead are committing to participate in the National Resources Defense Council’s Clean by Design educational program to learn more about integrating greener practices into their companies.

The pieces will be identified by a special hangtag and wholesaled alongside the designers’ fall collections. A portion of every wholesale sale will benefit Runway to Green, which, in turn, is earmarking those funds for several environmental organizations, including the Natural Resources Defense Council, the Alliance for Climate Protection and the United Nations Environment Programme’s Billion Tree Campaign.

Christie’s Bid to Save the Earth event, where the clothes will make their debut in a runway show underwritten by Tiffany & Co. and styled by Vogue fashion director Tonne Goodman and Vogue contributing editor Tabitha Simmons with several Tiffany jewels, will be hosted by David and Susan Rockefeller; François-Henri Pinault and Salma Hayek; Graydon and Anna Carter, and Vogue. On the night of the show, Net-a-porter.com will start offering the collection exclusively for a limited time, months before the collection hits the designers’ stores and select department and retail stores for fall. The e-tailer also committed to selling every item from the first Runway to Green collection. “By having the participation of 24 brands in this fund-raising initiative, we feel it sends a strong message that the fashion community is prepared to mobilize on behalf of an important environmental cause, raise awareness and contribute funds to support some of its champions,” said Natalie Massenet, Net-a-porter.com’s chairman and founder.

Through its partnership with Christie’s Green Auction, Runway to Green also will benefit the Central Park Conservancy, Conservation International and Oceana. The plan is to stage similar Runway to Green events around the world in the future.

“This collaboration constitutes one of the most important commitments made on behalf of the fashion industry to learn and address its impact on the environment,” Runway to Green chairman Lorenzo Roccia said. “It uses the power and reach of the industry to deliver a global message about the relevance and necessity to be educated on our individual role and responsibility in protecting the environment.”